A system for the handheld device enables it to precisely follow a digital plan with minimal guidance from a user. 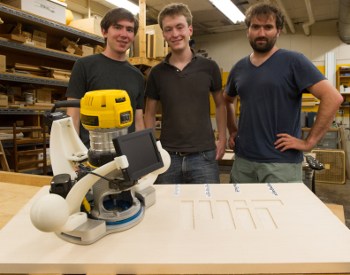 The self-correcting router is shown off by (from left to right): Ilan E. Moyer, Alec Rivers, and Fredo Durand. [Image: Fredo Durand]

Anyone who has tried to build a piece of furniture from scratch knows the frustration of painstakingly cutting pieces of wood, only to discover that they won't fit together because the cutting was not quite accurate enough.

That's exactly what happened to Alec Rivers, a PhD student in MIT's Department of Electrical Engineering and Computer Science (EECS), when he attempted to build a simple picture frame using woodworking equipment he had inherited from his grandfather. Despite measuring and aligning his tools as best he could by hand, Rivers found that he could not produce shapes with enough precision to make them all fit together. "I was getting incredibly frustrated, because just as with any home project I would cut things out and they would look about right, but none of the pieces would line up," Rivers says.

But rather than simply throwing the pieces of wood into the trash and settling for a store-bought picture frame, Rivers decided there had to be a better way. So he and colleagues Fredo Durand, an EECS associate professor and member of the Computer Science and Artificial Intelligence Laboratory (CSAIL), and Ilan Moyer, a graduate student in the Department of Mechanical Engineering, began developing a new kind of woodworking router - a drill-like cutting tool - that could automatically cut out accurate shapes from a piece of material by following a digital design. The result is a handheld device that can adjust its position to precisely follow a digital plan when the user moves the router roughly around the shape to be cut.

The team presented its device at the Siggraph conference in Los Angeles in August.

"You load the system up with a digital plan that you would like it to follow, and then you are only responsible for getting it to within a quarter-inch or so of that plan," Rivers says. "The device then adjusts the position of the cutting bit within the tool to keep it to the plan."

For the device to follow the design, it must know exactly where it is on the sheet of material at all times. So before beginning to cut, the user first moves the device over the raw material, while an on-board camera films the surface and then stitches together all the video frames it sees into a single, cohesive 2-D map of the piece. To ensure that the system can locate itself even when the material has no distinctive pattern or markings, the user simply places stickers containing a black and white contrast pattern on the sheet to be cut.

The user then loads the desired design onto a computer and places it over the 2-D digital map of the material. "Since you have this image of the actual piece of material you are working with, you can line up your cut precisely," Rivers says. "For example, if you wanted to put it right on the edge of the material you are using, or you wanted to continue a cut that you'd already started manually, you can do that."

Once the design is loaded onto the map, the user can line up the device on the piece of material and begin cutting; the system will then automatically compare all the new images it receives from its camera with the digital map to determine exactly where it is relative to the plan. Motors controlled by the system adjust the position of the drill to ensure that it precisely follows the plan. The router can accurately cut out even complex shapes, such as a map of the United States, Rivers says.

The device should be far cheaper to produce than existing automatic cutting tools, called CNC routers. These are very large, tabletop machines that can only cut shapes that are smaller than themselves, Rivers says. "So if you want to cut something that is very big, you need a huge CNC router, and that is, first of all, very expensive, and secondly it takes up a lot of space."

In contrast, relying on the user for the general positioning means the handheld device can theoretically cut out any size shape. Indeed, the MIT researchers are even investigating the possibility of installing a similar system on a vehicle, such as a forklift truck, attached to a flame cutter. That would allow it to precisely cut out very large shapes, such as the huge pieces of steel used in military shipbuilding.

The system could also be attached to electric scissors to accurately cut out shapes from fabrics, or to a print head, to quickly and easily draw pictures on large spaces, such as walls.

Daniel Ostrower, vice president of product development at Altitude, Inc., based in Somerville, MA, says the technology could make tool use far simpler and more accessible. "The device might allow certain companies to do with a hand tool what they now only do with a large piece of equipment," says Ostrower, who was not involved in this research. "In consumer markets, it may make it easier for creative people to make things they simply didn't feel capable of attempting before."