Self-guided bullet prototype can hit target a mile away 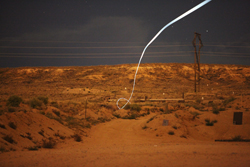 Take two Sandia National Laboratories engineers who are hunters, get them talking about the sport, and it shouldn't be surprising when the conversation leads to a patented design for a self-guided bullet that could help war fighters.

Sandia researchers Red Jones and Brian Kast and their colleagues have invented a dart-like, self-guided bullet for small-caliber, smooth-bore firearms that could hit laser-designated targets at distances of more than a mile (about 2,000 meters).

"We have a very promising technology to guide small projectiles that could be fully developed inexpensively and rapidly," Jones says.

Sandia is seeking a private company partner to complete testing of the prototype and bring a guided bullet to the marketplace.

Researchers have had initial success testing the design in computer simulations and in field tests of prototypes, built from commercially available parts, Jones says.

Sandia's design for the 4-in.-long bullet includes an optical sensor in the nose to detect a laser beam on a target. The sensor sends information to guidance and control electronics that use an algorithm in an eight-bit central processing unit to command electromagnetic actuators. These actuators steer tiny fins that guide the bullet to the target.

Most rifles (not shotguns) have grooves (or rifling) that cause bullets to spin so they fly straight, like a long football pass. To enable a bullet to turn in flight toward a target and to simplify the design, the spin had to go, Jones says.

The Sandia bullet flies straight due to its aerodynamically stable design, which consists of a center of gravity that sits forward in the projectile and tiny fins that enable it to fly without spin, just as a dart does, he says. 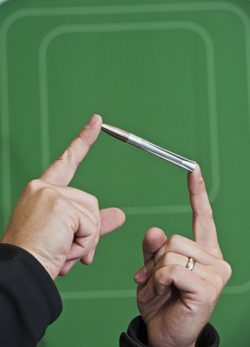 The 4-in.-long Sandia bullet has actuators that steer tiny fins that guide it to its target. [Photo by Randy Montoya]

Computer aerodynamic modeling showed the design would result in dramatic improvements in accuracy, Jones says. Computer simulations showed an unguided bullet under real-world conditions could miss a target more than a half mile away (1,000 m away) by 9.8 yd (9 m), but a guided bullet would get within 8 in. (0.2 m), according to the patent.

Plastic sabots provide a gas seal in the cartridge and protect the delicate fins until they drop off after the bullet emerges from the firearm's barrel.

The prototype does not require a device found in guided missiles called an inertial measuring unit, which would have added substantially to its cost. Instead, the researchers found that the bullet's relatively small size when compared to guided missiles "is helping us all around. It's kind of a fortuitous thing that none of us saw when we started," Jones says.

As the bullet flies through the air, it pitches and yaws at a set rate based on its mass and size. In larger guided missiles, the rate of flight-path corrections is relatively slow, so each correction needs to be very precise because fewer corrections are possible during flight. But "the natural body frequency of this bullet is about 30 hertz, so we can make corrections 30 times per second. That means we can overcorrect, so we don't have to be as precise each time," Jones says.

Testing has shown the electromagnetic actuator performs well and the bullet can reach speeds of 2,400 ft/sec, or Mach 2.1, using commercially available gunpowder. The researchers are confident it could reach standard military speeds using customized gunpowder.

And a nighttime field test, in which a tiny light-emitting diode, or LED, was attached to the bullet, showed the battery and electronics can survive flight, Jones says.

Researchers also filmed high-speed video of the bullet radically pitching as it exited the barrel. The bullet pitches less as it flies down range, a phenomenon known to long-range firearms experts as "going to sleep." Because the bullet's motions settle the longer it is in flight, accuracy improves at longer ranges, Jones says.

Note on video: The first bit of footage shows the plastic sabots, which protect the delicate steering fins, drop off after the bullet﻿ emerges from the firearm's barrel. The second portion of the footage shows the bullet curving slightly into its designated target. It is difficult to see the degree of curvature in the video due to the short distance the bullet is travelling in this segment. But who doesn't like to see slo-mo videos of bullets in flight?

"Nobody had ever seen that, but we've got high-speed video photography that shows that it's true," he says.

Potential customers for the bullet include the military, law enforcement, and recreational shooters.