Is this the perfect glass?

MIT researchers find a way to make glass that is anti-fogging, self-cleaning, and free of glare. 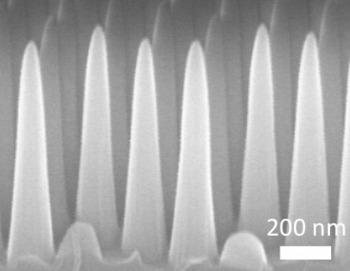 Through a process involving thin layers of material deposited on a surface and then selectively etched away, the MIT team produced a surface covered with tiny cones, each five times taller than their width. This pattern prevents reflections, while at the same time repelling water from the surface. [Image: Hyungryul Choi and Kyoo-Chul Park]

One of the most instantly recognizable features of glass is the way it reflects light. But a new way of creating surface textures on glass, developed by researchers at MIT, virtually eliminates reflections, producing glass that is almost unrecognizable because of its absence of glare -- and whose surface causes water droplets to bounce right off, like tiny rubber balls.

The new "multifunctional" glass, based on surface nanotextures that produce an array of conical features, is self-cleaning and resists fogging and glare, the researchers say. Ultimately, they hope it can be made using an inexpensive manufacturing process that could be applied to optical devices, the screens of smartphones and televisions, solar panels, car windshields and even windows in buildings.

Photovoltaic panels, Park explains, can lose as much as 40% of their efficiency within six months as dust and dirt accumulate on their surfaces. But a solar panel protected by the new self-cleaning glass, he says, would have much less of a problem. In addition, the panel would be more efficient because more light would be transmitted through its surface, instead of being reflected away -- especially when the sun's rays are inclined at a sharp angle to the panel. At such times, such as early mornings and late afternoons, conventional glass might reflect away more than 50% of the light, whereas an anti-reflection surface would reduce the reflection to a negligible level.

While some earlier work has treated solar panels with hydrophobic coatings, the new multifunctional surfaces created by the MIT team are even more effective at repelling water, keeping the panels clean longer, the researchers say. In addition, existing hydrophobic coatings do not prevent reflective losses, giving the new system yet another advantage.

Other applications could include optical devices such as microscopes and cameras to be used in humid environments, where both the antireflective and anti-fogging capabilities could be useful. In touch-screen devices, the glass would not only eliminate reflections, but would also resist contamination by sweat.

Ultimately, if the cost of such glass can be lowered sufficiently, even car windows could benefit, Choi says, cleaning themselves of dirt and grit on the exterior surface of the windows, eliminating glare and reflections that can impair visibility, and preventing fogging on the interior surface.

The surface pattern -- consisting of an array of nanoscale cones that are five times as tall as their base width of 200 nanometers -- is based on a new fabrication approach the MIT team developed using coating and etching techniques adapted from the semiconductor industry. Fabrication begins by coating a glass surface with several thin layers, including a photoresist layer, which is then illuminated with a grid pattern and etched away; successive etchings produce the conical shapes. The team has already applied for a patent on the process.

Since it is the shape of the nanotextured surface -- rather than any particular method of achieving that shape -- that provides the unique characteristics, Park and Choi say that in the future glass or transparent polymer films might be manufactured with such surface features simply by passing them through a pair of textured rollers while still partially molten; such a process would add minimally to the cost of manufacture.

The researchers say they drew their inspiration from nature, where textured surfaces ranging from lotus leaves to desert-beetle carapaces and moth eyes have developed in ways that often fulfill multiple purposes at once. Although the arrays of pointed nanocones on the surface appear fragile when viewed microscopically, the researchers say their calculations show they should be resistant to a wide range of forces, ranging from impact by raindrops in a strong downpour or wind-driven pollen and grit to direct poking with a finger. Further testing will be needed to demonstrate how well the nanotextured surfaces hold up over time in practical applications.

Andrew Parker, a senior visiting research fellow at Oxford University's Green Templeton College in the U.K. who was not involved in this work, says, "Multifunctional surfaces in animals and plants are common. For the first time, as far as I am aware, this paper learns a lesson in manufacturing efficiency from nature by making an optimized antireflective and anti-fogging device. This is the way that nature works, and may well be the future of a greener engineering where two structures, and two manufacturing processes, are replaced by one."

The research was funded by the Army Research Office through MIT's Institute for Soldier Nanotechnology; the Air Force Office of Scientific Research; Singapore's National Research Foundation through the Singapore-MIT Alliance for Research and Technology (SMART) Centre, and the Xerox Foundation. Park and Choi are recipients of fellowships from Samsung and the Kwanjeong Educational Foundation/STX Scholarship Foundation, respectively.