By Eric Kowal, The Picatinny Voice 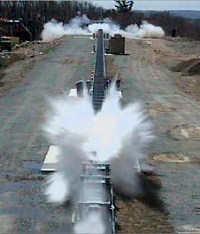 An overhead view of the Soft Catch (SCat) Recovery System firing a projectile.

Why would the U.S. Army want to fire a 155-mm projectile into 540 ft of steel catch tubes (called the Soft Catch (SCat) Recovery System) and then recover the projectile at the other end?

The answer is actually quite simple: It saves time, money, and helps to develop better products.

First, the forces the projectile experiences from being fired from a cannon tube can be recorded using on-board-recorders, which help engineers design robust and reliable precision munition systems and components.

That information is then transferred to a computer, analyzed, and provides valuable feedback to engineers and warfighters to help in the future development of weapons and munitions systems.

Second, the SCat Gun System saves money. Engineers can either catch the round and easily recover it within minutes at Picatinny Arsenal or traipse through the desert in Arizona looking for the round they just fired.

Without the Soft Recovery System facility and the Soft Catch Gun capability, the costs associated with weaponizing advanced technology increase to the point where programs are managed at high risk to fit within allocated budgets.

The SCat facility is owned and operated by the U.S. Army Armament Research, Development, and Engineering Center (ARDEC) and dovetails with the organization's mission.

Development programs such as the Excalibur precision ammunition and Precision Guidance Kits can use such a system for ongoing development, thus reducing development cycle time and cost.

"This is here to soft-catch projectiles so that we can tear them apart after we have fired them to determine what has or has not survived," says Robert Marchak, a mechanical engineer in the Fuze Division of the Munitions Engineering Technology Center.

"We are trying to increase the reliability of smart munitions when we give them to the Soldier," he says.

This is a hybrid system that uses both pressurized air and water to help slow down the projectile's momentum. It is the only system of its kind in the world.

The first part of the chain of catch tubes only contains atmospheric air. The next section, 320 ft of the tubes, contains pressurized air, followed by an 80-ft section filled with water.

A small burst diaphragm seals one end of the pressurized air, and a piston seals the other end.

The piston also separates the water and pressurized air sections. The burst diaphragm and piston are replaced after each test fire.

Once fired, the projectile achieves free flight for approximately 6 ft and travels down the catch tubes, generating shockwaves that interact with the atmospheric air section, the burst diaphragm, the pressurized air section, the piston, and the water section.

In a little over 1 sec, the projectile shockwaves break the burst diaphragm. The air section is compressed and pushed forward, shock and pressure shear the piston moving it against the water (momentum transfer), all while slowing the projectile to a stop.

The piston is ejected out of the end of the system, followed by the air and water, and finally the projectile comes to rest in a mechanized brake system. 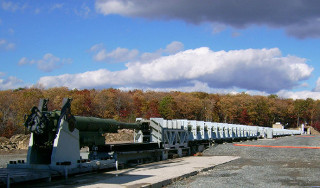 With a muzzle velocity of 888 m/sec, the entire test takes a little over 1 sec from the time the projectile is fired until it has completely stopped.

The speed of 888 m/sec is equal to 1,986 mph. If a commuter plane could travel at that speed, passengers could fly from Picatinny Arsenal in New Jersey to Albuquerque, NM, in 1 hr.

The catch tubes are made of the same steel used to manufacture the 155-mm gun tube.

What makes this system attractive is the tight fit achieved just over the projectile bourlette diameter. This helps keep the projectile straight and makes for a smooth ride.

In addition, the system was designed to quickly remove and replace broken parts. Having the capability to quickly turn the system around after part failures is critical in maintaining an ongoing testing capability, which in turn helps weapons programs stay on schedule.

Since the system is entirely made of metal, temperature fluctuations cause the system to expand with heat and contract when cold.

The system was designed to remain straight, yet have the ability to move in the axial direction during these temperature changes; otherwise, if completely fixed, the stresses caused by contractions or expansions could break bolts or other critical parts on the system.

"This whole system during the winter to summer months can grow or shrink about two inches on any given day," Marchak says.

The speed and or velocity of the projectile can be controlled by the energetic operator using a pre-determined amount of propellant, but in doing so, the amount of pressurized air and mass of water needs to be accounted for, as well.

"This whole system is more or less based on the velocity of the projectile. The faster the projectile flies, the more pressurized air and water mass you need to try and slow it down," Marchak says.

Marchak says that in order to determine the amount of air pressure and water mass used in the system, many variables need to be considered, including the outside temperature, since the density of the pressurized air changes with temperature.

"We also have a lot of instrumentation, pressure gauges, accelerometers, temperature sensors, proximity sensors," Marchak says. "We are trying to measure and characterize how the projectile and the shockwave that comes off the projectile travel down the tube."

The data is dumped into an electronics data conex box alongside the catch system, then transferred to the safety bunker where a team of engineers save, process, and evaluate the information.

Some of the items tested in the SCat gun include electronic safe and arm devices, GPS electronics boards, infrared cameras, control actuation systems, guidance and navigation units, and many more mechanical and electrical components.

The Goodrich use of the SCat Gun System has been increasing, with the team achieving a milestone of its 500th shot on May 22, 2012.

A typical test day includes four to five test shots at an average cost of $28,000, which Marchak describes as a small price for helping warfighters in the pursuit of battlefield dominance.

The first round fired from the 155-mm SCat Gun System came in April 2007. Now, with 559 shots completed to date, Marchak says the system is becoming the standard for precision munitions testing.