When the U.S. Navy's USS Makin Island leaves base, it does not steam across the ocean. It motors. The amphibious assault ship, commissioned in 2009, is the Navy's first hybrid ship. "It's like a floating Prius, but much bigger," says Paul English, a marine leader in GE's Power Conversion business. "If you consider a hybrid car, it makes sense to run the gas engine on the highway and switch to an electric motor in stop-and-go traffic. It's the same on the ocean." 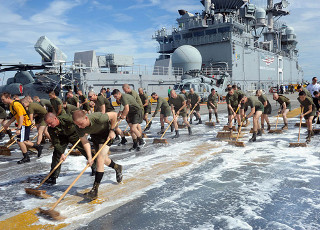 Sailors and Marines with the 11th Marine Expeditionary Unit scrub down the flight deck of the amphibious assault ship USS Makin Island. The ship is the Navy's first vessel powered by hybrid propulsion.

GE gave the Makin Island a new system using a combination of two advanced gas turbines for high-speed sailing (they use the same jet engine technology that powers Air Force One and many Boeing 747 jumbos) and a pair of 10,000-hp electric motors that kick in when the vessel slows down below 12 knots. The motors draw power from six diesel generators. "Most ships spend the overwhelming majority of their working life doing something other than rushing from one place to another at top speed," English says. "In fact, for about 70 percent of their operational life, ships tend to kind of hang around, deploy troops and aircraft, or support Marines on the ground."

English says that when a typical gas turbine falls well below maximum output, it becomes "tremendously inefficient, burning fuel just to turn over." The GE propulsion system solves the problem and saves millions in fuel costs along the way. The Navy estimates that hybrid propulsion will save $250 million in fuel over the life of the ship. "If you work that up over a fleet of ships, you'll see that something big is going on," English says.

The 800-ft-long USS Makin Island, which can carry close to 100 helicopters and 3,000 sailors and Marines, saved the Navy more than 4 million gallons of fuel worth $15 million during its first seven-month deployment. GE has already received orders for two more hybrid ships, including one for the Navy's latest large-deck amphibious assault ship, USS Tripoli, announced recently.

Says English: "It's astonishing. It's big time. It's kind of catching on."