Wheels:
Classical music -- designing the sound of the Porsche 911 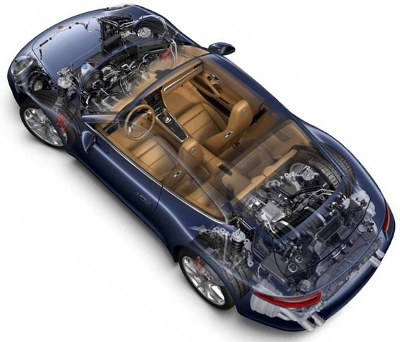 Designing any exhaust system today is a challenge, considering the role the exhaust plays in emissions reduction and fuel efficiency. But designing a system for a legendary sports car which not only satisfies noise regulations but also meets the emotional requirements of an iconic brand is tougher still.

The new Porsche 911, codenamed type 991, is the seventh in the famous Porsche dynasty dating back to 1963. Porsche believes that owning a 911 is much more than a merely practical experience, insisting that the emotional element to ownership is a crucial part of the picture. If that sounds like so much marketing hype, it is worth remembering that for whatever reason people choose to buy a Porsche, the need to acquire workaday transport is not uppermost in their minds.

Porsche takes this aspect of car ownership so seriously that in the press material for the latest 991 it gives a scientific description of emotion as "a psychophysiological process that is triggered by a conscious or unconscious perception and interpretation of an object or situation." And, as any Porsche owner would agree, one of the most important characteristics for tapping into the driver's emotions is the way the car sounds.

The sound of an icon
The basis of all 911s, the flat-7six engine, is a major benefit when it comes to creating an appealing sound. This is what Porsche calls the 911's 'voice' and it is a distinctive one with a low, rumbling, offbeat burble that has thrilled several generations of car enthusiasts. Sound is a defining part of the 911's character, crucial to the brand and something that makes successful design of the exhaust, which for most cars is no more than a utility component, absolutely vital.

In terms of noise, the 911 is more complex than many cars, simply because all of the sound -- mechanical, exhaust note, and induction -- emanates from the same place: the rear of the car. The exhaust sound is closely related to power output and, whereas induction noises are heard mainly inside the car, the exhaust is heard both inside and out. It needs to be thrilling when the car is driven hard, yet unobtrusive when the driver chooses a more leisurely approach. 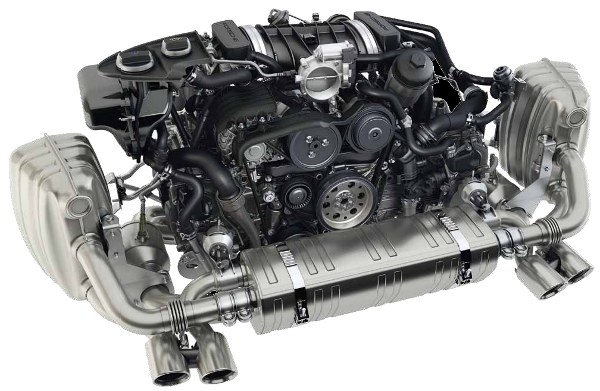 Bernd Müller is one of the senior engineers in the Porsche acoustics department charged with the difficult task of meeting this diverse set of criteria. "Increasing the emotional appeal of this car was, to a large extent, achieved through the acoustics," he confirms.

The fact that all of the sound emanates from the rear of the car is something of a hindrance, its concentration having an impact on the drive-by noise test. "We also had to provide an optional sports exhaust system, but none of the exhaust systems should have any annoying characteristics such as low speed boom," Müller continues. Any detrimental effect on engine power or delivery was out of the question, especially since in the standard 911 Carrera the engine capacity has been reduced from 3.6 to 3.4 liters.

Standardizing on WAVE software
Porsche is one of a growing number of automakers to have standardized on the use of Ricardo's WAVE software for 1D performance and gas dynamics simulation; the company's acoustics team therefore used the product to investigate possible scenarios and to design the finished exhaust systems.

No fewer than three different systems were needed -- one base system each for the 3.4-liter Carrera and the 3.8-liter Carrera S engines, plus the optional Sports exhaust. Weight reduction was vital too. Depending on specification, the new 991 model was designed to be between 30 kg and 45 kg lighter than its outgoing 997 equivalent: this was achieved in large measure by the use of a hybrid, steel-aluminium construction. Adding unnecessary weight by introducing non-essential components in the exhaust system would not be acceptable in this program. A further target was to reduce exhaust back-pressure in order to increase specific power output. This would be particularly important in the case of the downsized 3.4-liter engine.

The package space was compact too, given that the exhaust system of the 911 is effectively wrapped around the engine and there is only a small area between the engine itself and the rear and sides of the engine compartment. WAVE was used to evaluate a number of different concepts and to provide a simulation of the exhaust orifice noise based on a position 25 cm behind it at an angle of 45 degrees to one side. Using WaveMesher, the Porsche powertrain team modelled the entire engine, from the air intake system down to the exhaust. Both the air cleaner system and the exhaust silencer acoustics were modelled using WaveBuild3D.

Despite the downsizing to 3.4 liters, the power of the Carrera engine has increased from the 345 hp of the 3.6-liter unit to a new figure of 350 hp. Reducing back pressure was crucial in order to achieve this and, to this end, movable flaps were introduced into the 3.4-liter Sport and both variants of the 3.8-liter exhaust system to support the torque figures at low revs while providing free flow at higher revs. It was important that the flap switch points were not audible to the customer, especially on base systems, and that the sound of the exhaust was clearly different to that of the optional Sports system.

Separated -- and combined -- gas flow
The 3.4-liter system is to some extent a carry-over design from the previous 997 3.6 liter, comprising a center "premuffler" with a baffle to separate left and right cylinder banks and two main silencers each side. WaveBuild was used to model the center and side mufflers, including the design of the general layout, duct lengths and diameters, and the baffle position. The 3.8-liter baseline exhaust model required a different approach, with bypass pipes for the center volume of the muffler and flaps to achieve the necessary backpressure reduction. With the flaps open, the volume of the exhaust note increases but, because there is still a rigid baffle in the center of the muffler, the cylinder banks remain separated. 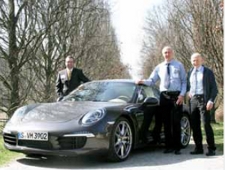 The sports exhaust system was the subject of some considerable thought, and a number of configurations were investigated using WAVE. A common chamber mixing the left and right cylinder bank flow would adversely affect torque at low rev range, yet it is this mixing which yields an even more characteristic flat-six sound. The solution was to split the premuffler into two separate volumes connected by a crossover controlled by flaps. When the flaps are opened the cylinder bank flows are combined, producing the characteristic sound. The sports system is 5 kg lighter than the previous version and is linked to a push-button control in the cabin so the sports exhaust note is selectable at any time.

Porsche engineers achieved all their goals for the three new exhaust systems, and carefully engineered their aural qualities without compromising strict engine performance and weight guidelines. Using WAVE, it was possible to evaluate and take decisions on a number of concepts without resorting to the manufacture of unnecessary hardware. Most important of all, concludes Müller, the aural emotions of the 911 have been enhanced by sound engineering and with the help of WAVE.

Concept 1
Alternative flow, where the exhaust is routed through the rear muffler before the front mufflers, by wrapping the exhaust around the engine. Clearly, this is an option not available to designers of front-engine exhaust systems.

Concept 2
A Porsche GT3-derived system with flap positioned before the center muffler. If the flaps are open, the gas flows from the center volume to the left and right tailpipes. If they're closed, it follows a split route to the side muffler then center muffler.

Concept 3
A "snail" system. The packaging in the 911 sometimes makes it difficult to achieve a long enough tailpipe. This design uses flaps which when closed significantly increase the tailpipe length.

Concept 4
A system derived from the 997 turbo. 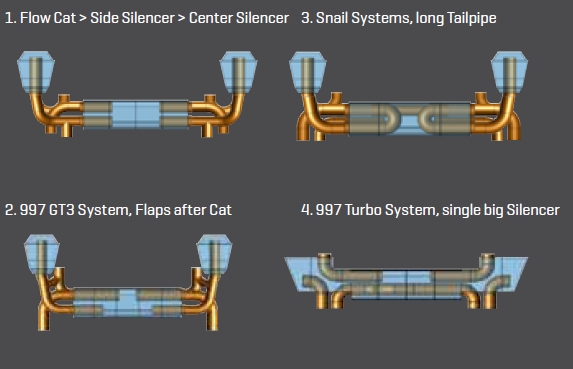 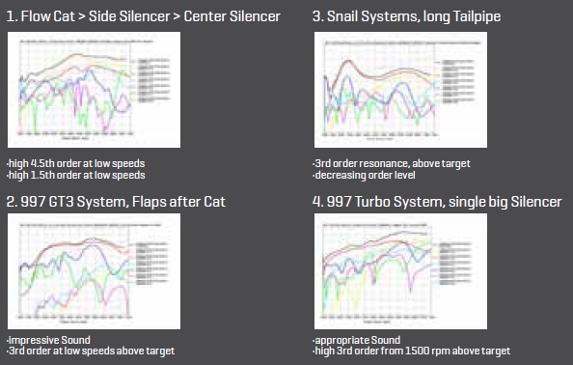