Builder of world's smallest production V8 engine discovers precision honing more critical than ever at quarter-scale. Perseverance over setbacks pays off as collectors and gear heads around the world "gotta have one." 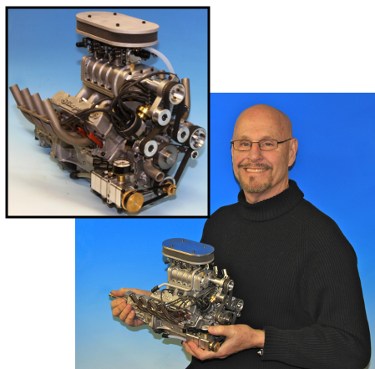 Gary Conley's 30-year quest to manufacture a true production V8 engine in quarter-scale almost went up in smoke twice: once in 2001 when a foundry fire claimed all his critical molds, and later when oil smoke proved a stubborn problem during run-offs of the engine. Conley overcame the first setback with years of sheer determination. The second issue required a Sunnen MB 1660 honing machine, abrasives, and some Sunnen know-how. Today, the man for whom "perfection is almost good enough" has a business called Conley Precision Engines building his Stinger 609 V8, with a long backlog of orders from collectors and hobbyists around the world, and he credits honing as the process that helped him come up with a smokin' hot product.

Conley's Stinger 609 is no toy or novelty, but a serious engine built for high performance and durability. Modeled on a Viper V-10 and available in naturally aspirated or supercharged versions, the Stinger has a dry sump, pressurized lubrication system, electronic ignition, electric starter, split main and rod bearings, steel valve guides, and seats. It weighs about 11.25 lb and measures approximately 14 in. long (from the front timing belt to the end of the transmission), 6 in. wide, and 8.25 in. tall. The supercharged version is about 10 in. tall. The bore is about 1 in., with a 0.952 stroke. The crank and cam are 4140, case-hardened to 20 microns deep and then ground. The engine uses freestanding, full-wet, cast-iron liners. On the cosmetics side, investment casting gives exceptional detail to parts cast in 356 aluminum and hardened to T6, such as the pan, heads, valve covers, crankcase, and timing cover. 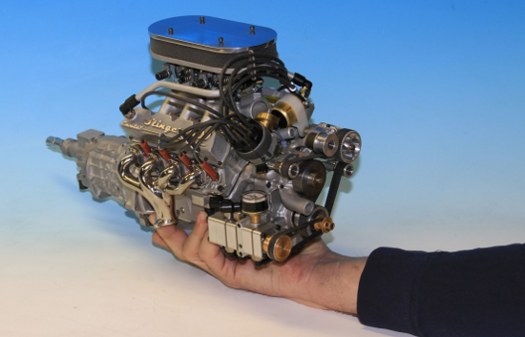 The quarter-scale Stinger 609 engine is a serious engine built for high performance. It is available in naturally aspirated or supercharged versions.

Genesis of the Stinger 609
Conley began pursuing his dream (with ample support from his wife) after completing his master's degree and doing a five-year stint as a teacher. In 1996, his reputation led Chrysler to request that he build a quarter-scale Viper V-10. Soon after, a full-size V-10 engine arrived at his shop to be "reverse engineered" to the quarter-scale size. After five years of development, with the V-10 ready to go into production, disaster struck when his molds were destroyed in a foundry fire. More than $350,000 in molds and five years of time vanished. However, Conley retained the mold masters from the V-10 and realized he had plenty of knowledge to build on. With steely determination over a period of additional years, he carefully redesigned his tooling to produce V8 components, and thus was born the Stinger 609.

Smoke gets in your eyes
According to Conley, the first units of the Stinger engine burned oil so badly they filled a room with smoke in seconds. He discovered the problem was too much oil being pushed up into the cylinders, and though he did not realize it at the time, his honed cylinder surface was too smooth. "The problem was that the molecular size of oil does not scale down," he says. "I thought this was caused by the rings and spent months assembling engines, making new liners, honing and decking the liners, re-designing the rings and pistons, and testing to no avail." 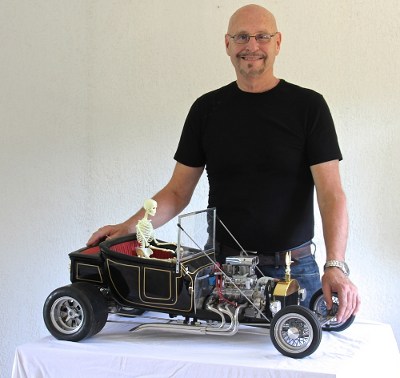 Conley's Stnger 609 engine is used by hobbyists and engine collectors in many ways, including model boats, dragsters, and this 1923 T-bucket roadster.

Digging deeper into the science of ring and cylinder design, he learned about the nuances of crosshatch, including the proper angle and depth required to create valleys to retain the oil. "At the time, I did not associate Sunnen with a solution to the problem," Conley says. "I was honing with the MB 1660 but came to learn my surface finish was too smooth. So, I got a very coarse, 80-grit, 5-hardness J25 silicone carbide honing stone. This produced nice surface valleys for the oil to be retained, but I had not accounted for the surface peaks. After installing rings with an end gap of 0.003 to 0.004 inches and running the engine, the end gap suddenly increased to 0.012 inch, because the rings were abrading the peaks off the cylinder finish, and the oil issue returned. Bear in mind, we are using stepped cast iron rings only 0.062-inch thick, without an oil control ring because there's no space for one."

After consulting with Sunnen engine experts, Conley determined that plateau honing was the answer. Plateau honing, which is a second pass with a brush or milder abrasive, removes the surface peaks left by the initial pass. It creates a surface profile that resembles a series of plateaus, providing a much greater bearing area while maintaining the crosshatch valleys for oil retention. "I once ran a set of new rings in a cylinder that had been plateaued and one that was not," Conley says. "The plateaued cylinder had no ring wear after run-in. The end gap did change slightly, but this is probably cylinder wear rather than ring wear, because so much happens so fast in these small engines." 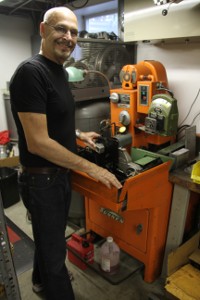 Gary Conley in his shop with the Sunnen MB 1660 hone.

Honing used on many bores
Today, honing continues to be an important step in creation of Conley's quarter-scale beasts, and he attributes much of his honing knowledge to Sunnen. "I learned decades worth of information about honing from Sunnen," he says. "Learning how to line-hone an engine block straight and true was quite an achievement. We could not get the tandem cam and crank bores on the same centerline without this. Using a three-stone mandrel, I can hold 0.001 inch, end to end, on a six-inch workpiece. After the investment-cast aluminum block is machined and the main bearing is torqued down, we line-hone the bores for the crankshaft and the camshaft. The 4140 camshaft rides on the T6 aluminum, just like a real Viper engine. The crank and cam bores are about 0.875 inch and 0.625 inch respectively. We machine the 7075 connecting rods and install a bearing insert that allows the engine to start dry, without oil pressure, and we experience no wear on the crank or con rods. The smallest bores we hone are the tops of the con rods -- about 0.248 inch -- and the piston pin bores. I stack a set of rods on a ground pin using the large end of the rod, then hone the pin bores to ensure they are all at the exact same height and straight."

Conley stresses that he designs for longevity. "Our use of six-bolt mains makes our lower almost bulletproof," he says. "We also have crankcase ventilation and split keepers on the valves to keep them in place. Oil filtration is critical on a small engine, too. It's amazing what comes out of the filter system." 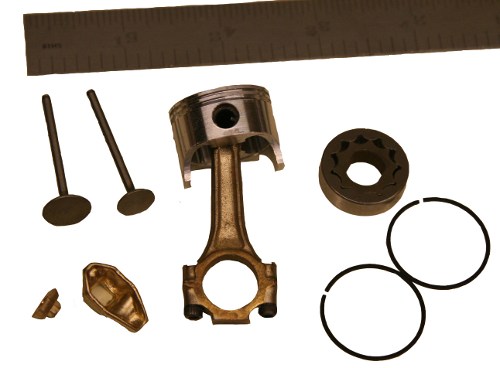 Conley uses the Sunnen MB 1660 to hone his engine components, such as con rods, crankshaft, camshaft, and piston pin bores.

Conley sources the parts that he doesn't create himself, including quarter-scale spark plugs from miniature model engine builder Paul Knapp in Payson, AZ; rings from Dave McMillan at D.A.M. Good Engineering in San Jose, CA; and castings from Invest Cast, Inc. in Minneapolis, MN. "I've been very fortunate to find people who share my passion for creating these engines," says Conley. "Bill Walker, Sr. at Invest Cast assured me that his group could cast the parts I needed, and they delivered."

In terms of output, the normally aspirated Stinger produces about 4.5 hp, while the supercharger version hits 9.5 hp at 10,000 RPM. Today, Conley sells the engines with a test stand for collectors or as crate motors for builders of model boats or other adult toys. "A customer in Austria recently purchased two supercharged engines for an 8-foot offshore boat," he says. He also offers the engines in a quarter-scale 1934 Ford or 1923 T-bucket roadster, and he has his own 7-ft dragster.

Conley was named the Joe Martin Foundation's 2012 "Metalworking Craftsman of the Year" and enjoys a bit of celebrity as he makes appearances at trade shows, signing autographs and holding court with gearheads. "I'm an overnight success that took 30 years," he says. And his backlog grows as people find new ways to put the mini engines to work in quarter-scale vehicles of all types.

To learn more about Conley Precision Engines, go to www.conleyprecision.com.