Army researchers are responding to a request from the U.S. Special Operations Command (SOCOM) for technologies to help develop a revolutionary Tactical Assault Light Operator Suit.

The Tactical Assault Light Operator Suit, or TALOS, is an advanced infantry uniform that promises to provide superhuman strength with greater ballistic protection. Using wide-area networking and on-board computers, operators will have more situational awareness of the action around them and of their own bodies. 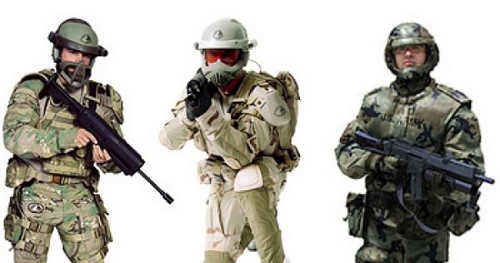 The U.S. Army Research, Development and Engineering Command, known as RDECOM, has submitted TALOS proposals in response to a May 15 request.

"There is no one industry that can build it," said SOCOM Senior Enlisted Advisor Command Sgt. Maj. Chris Faris during a panel discussion at a conference at MacDill Air Force Base, near Tampa, Fla., recently, reported Defense Media Network.

"[The] requirement is a comprehensive family of systems in a combat armor suit where we bring together an exoskeleton with innovative armor, displays for power monitoring, health monitoring, and integrating a weapon into that -- a whole bunch of stuff that RDECOM is playing heavily in," said. Lt. Col. Karl Borjes, an RDECOM science advisor assigned to SOCOM.

TALOS will have a physiological subsystem that lies against the skin that is embedded with sensors to monitor core body temperature, skin temperature, heart rate, body position, and hydration levels. 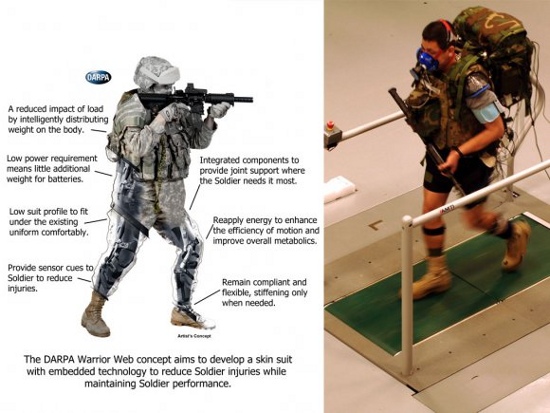 The Defense Advanced Research Projects Agency (DARPA) is working on the Warrior Web Project, which has many complementary technologies to the Army's Tactical Assault Light Operator Suit concept (TALOS) but mainly focuses on reducing the harmful effects of extra load weight on Soldiers. [Photo Credit: Department of Defense]

Concurrently, the Defense Advanced Research Projects Agency (DARPA) is working on the Warrior Web Project, which has many of the attributes of the Army's Tactical Assault Light Operator Suit concept (TALOS) but has a complementary focus. The Warrior Web program seeks to develop the technologies required to prevent and reduce musculoskeletal injuries caused by dynamic events typically found in the warfighter's environment. The ultimate program goal is "a lightweight, conformal under-suit that is transparent to the user (like a diver's wetsuit). The suit seeks to employ a system (or web) of closed-loop controlled actuation, transmission, and functional structures that protect injury prone areas, focusing on the soft tissues that connect and interface with the skeletal system," according to the DARPA website.

Scientists at the Massachusetts Institute of Technology (MIT) are currently developing armor made from magnetorheological fluids -- liquid body armor -- that transforms from liquid to solid in milliseconds when a magnetic field or electrical current is applied. Though still in development, this technology is being considered to support TALOS.

"RDECOM cuts across every aspect making up this combat armor suit," Borjes said. "It's advanced armor. It's communications, antennas. It's cognitive performance. It's sensors, miniature-type circuits. That's all going to fit in here, too."

SOCOM demonstrations will take place July 8-10, at or near MacDill Air Force Base.

The primary demonstration goal is to identify technologies that could be integrated into an initial capability within a year. A second goal is to determine if fielding the TALOS within three years is feasible.

U.S. Army science advisors, such as Borjes, are embedded with major units around the world to speed technology solutions to Soldiers' needs. The Field Assistance in Science and Technology program's 30 science advisors, both uniformed officers and Army civilians, provide a link between Soldiers and the RDECOM's thousands of subject matter experts.

The U.S. Army Research, Development and Engineering Command (RDECOM ) has the mission to develop technology and engineering solutions for America's Soldiers.

RDECOM is a major subordinate command of the U.S. Army Materiel Command. AMC is the Army's premier provider of materiel readiness -- technology, acquisition support, materiel development, logistics power projection, and sustainment -- to the total force, across the spectrum of joint military operations. As the saying goes, "If a Soldier shoots it, drives it, flies it, wears it, eats it, or communicates with it, AMC provides it."