Extreme miniaturization:
7 devices in one chip navigate without GPS 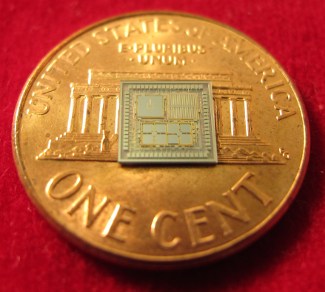 The U.S. military relies on the space-based Global Positioning System (GPS) to aid air, land, and sea navigation. Like the GPS units in many automobiles today, a simple receiver and some processing power is all that is needed for accurate navigation.

But what if the GPS satellites suddenly became unavailable due to malfunction, enemy action, or simple interference, such as driving into a tunnel? Unavailability of GPS would be inconvenient for drivers on the road, but could be disastrous for military missions. DARPA is working to protect against such a scenario, and an emerging solution is much smaller than the navigation instruments in today's defense systems.

DARPA researchers at the University of Michigan have made significant progress with a timing and inertial measurement unit (TIMU) that contains everything needed to aid navigation when GPS is temporarily unavailable. The single-chip TIMU prototype contains a six-axis IMU (three gyroscopes and three accelerometers) and integrates a highly accurate master clock into a single miniature system that is much smaller than a penny. This chip integrates breakthrough devices (clocks, gyroscopes, and accelerometers), materials, and designs from DARPA's Micro-Technology for Positioning, Navigation, and Timing (Micro-PNT) program.

Three pieces of information are needed to navigate between known points A and B with precision: orientation, acceleration, and time. This new chip integrates state-of-the-art devices that can measure all three simultaneously. The elegant design is accomplished through new fabrication processes in high-quality materials for multi-layered, packaged inertial sensors and a timing unit, all in a tiny 10-mm3, package. Each of the six microfabricated layers of the TIMU is only 50 microns thick, approximately the thickness of a human hair. Each layer has a different function, akin to floors in a building.

"Both the structural layer of the sensors and the integrated package are made of silica," says Andrei Shkel, DARPA program manager. "The hardness and the high-performance material properties of silica make it the material of choice for integrating all of these devices into a miniature package. The resulting TIMU is small enough and should be robust enough for applications [when GPS is unavailable or limited for a short period of time] such as personnel tracking, handheld navigation, small-diameter munitions, and small airborne platforms."

The goal of the Micro-PNT program is to develop technology for self-contained, chip-scale inertial navigation and precision guidance. Other recent breakthroughs from Micro-PNT include new microfabrication methods and materials for inertial sensors. 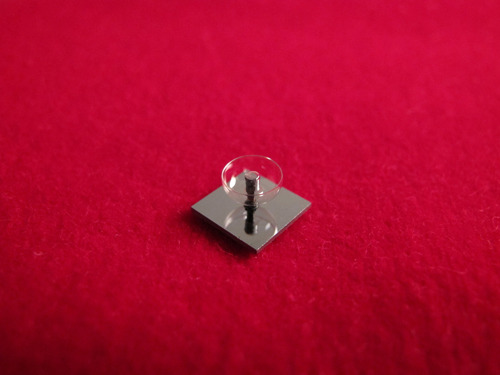 Researchers developed fabrication methods that replicate traditional glass-blowing techniques at the microscale. The result is tiny 3D wineglass-shaped inertial sensors. These sensors are symmetrical enough to have a frequency split approaching 10 hertz, a result never before achieved at this size and approaching levels of symmetry required for high-quality navigation devices. The frequency split is a measure to predict the symmetry (and thus accuracy) of the device. It is a measure of the difference between two different axes of elasticity. The greater the difference, the more imperfection is present, resulting in a less accurate sensor. 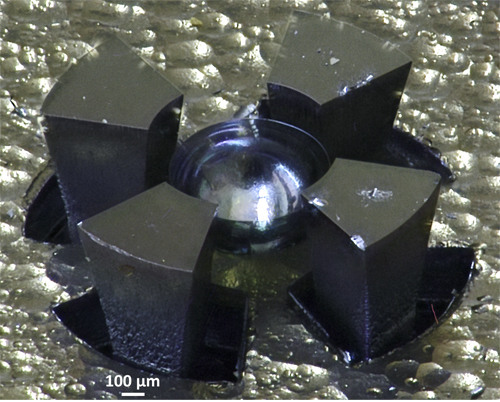 Similar to glass blowing, quartz blowing can be used to make an even more symmetric structure. Researchers developed fabrication techniques needed to heat quartz to 1,700 deg C (a typical softening point for glass is about 800 deg C) and to then cool it rapidly. The fabrication can be performed in large-quantity batches, producing hundreds of devices on a single wafer. 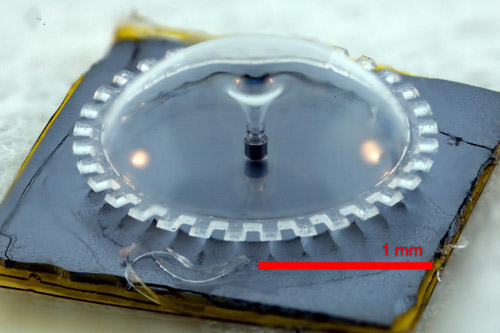 Layering diamond over a blown structure or depositing CVD diamond in a micro-well on the substrate have been shown to be effective, promising methods for creating highly symmetric, accurate 3D inertial-sensor structures.

"These new fabrication methods were thought to be unrealistic just a few years ago," says Andrei Shkel, the DARPA program manager.