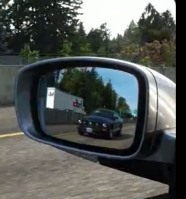 A new optical prescription for automobile side-view mirrors may eliminate the dreaded "blind spot" in traffic without distorting the perceived distance of cars approaching from behind. As described in a paper* published Jan. 28, 2012, in the Optical Society's (OSA) journal Optics Letters, objects viewed in a mirror using the new design appear larger than in traditional side-view mirrors, so it's easier to judge their following distance and speed.

Today's motor vehicles in the United States use two different types of mirrors for the driver and passenger sides.

The driver's side mirror is flat so that objects viewed in it are undistorted and not optically reduced in size, allowing the operator to accurately judge an approaching-from-behind vehicle's separation distance and speed. Unfortunately, the optics of a flat mirror also create a blind spot, an area of limited vision around a vehicle that often leads to collisions during merges, lane changes, or turns.

The passenger side mirror, on the other hand, possesses a spherical convex shape. While the small radius of curvature widens the field of view, it also causes any object seen in it to look smaller in size and farther away than it actually is. Because of this issue, passenger side mirrors on cars and trucks in the United States must be engraved with the safety warning, "Objects in mirror are closer than they appear."

In the European Union, both driver and passenger side mirrors are aspheric (one that bulges more to one side than the other, creating two zones on the same mirror). The inner zone (the section nearest the door) has a nearly perfect spherical shape, while the outer zone (the section farthest from the door) becomes less and less curved toward the edges. The outer zone of this aspheric design also produces a similar distance and size distortion as seen in spherical convex designs.

In an attempt to remedy this problem, some automotive manufacturers have installed a separate, small wide-angle mirror in the upper corner of side mirrors. This is a slightly domed square that provides a wide-angle view similar to a camera's fisheye lens. However, drivers often find this system to be a distracting, as well as expensive, addition.

A simpler design for a mirror that would be free of blind spots, have a wide field of view, and produce images that are accurately scaled to the true size of an approaching object -- and could work for both sides of a vehicle -- has been proposed by researchers Hocheol Lee and Dohyun Kim of Hanbat National University in Korea, and Sung Yi at Portland State University in Oregon. Their solution was to turn to a progressive additive optics technology commonly used in "no-line multifocal" eyeglasses that simultaneously corrects myopia (nearsightedness) and presbyopia (reduced focusing ability). 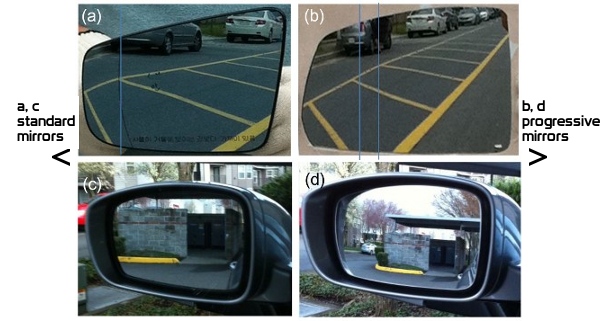 "Like multifocal glasses that give the wearer a range of focusing abilities from near to far and everything in between, our progressive mirror consists of three resolution zones: one for distance vision, one for close-up viewing, and a middle zone that makes the transition between the two," says Lee. "However, unlike glasses where the range of focus is vertically stacked [from distance viewing on top to close-up viewing on bottom], our mirror surface is horizontally progressive."

Lee says that a driver's side mirror manufactured with his team's new design would feature a curvature where the inner zone is for distance viewing and the outer zone is for near-field viewing to compensate for what otherwise would be blind spots. "The image of a vehicle approaching from behind would only be reduced in the progressive zone in the center," Lee says, "while the image sizes in the inner and outer zones are not changed."

The horizontal progressive mirror, Lee says, does have some problems with binocular disparity (the slight difference between the viewpoints of a person's two eyes) and astigmatism (blurring of a viewed image due to the difference between the focusing power in the horizontal and vertical directions). These minor errors are a positive tradeoff, the researchers feel, to gain a mirror with a greatly expanded field of view, more reliable depth perception, and no blind spot.

VIDEO CAPTION: This video demonstrates how the progressive mirror provides an accurate depiction of the distance to approaching-from-behind vehicles. The appearance of the vehicle out the side window just as it leaves the mirror's field of view demonstrates the smooth transition between zones and the elimination of the blind spot. [Credit: Optics Letters.]

To prove the merits of their design, the researchers used a conventional glass molding process to manufacture a prototype horizontal progressive mirror. They were able to produce a mirror with more than double the field of view of a traditional flat mirror.

Other wide-angle designs have also been proposed, but the new design described in the Optics Letters paper offers a particularly easy-to-manufacture approach to the problem of blind spots by seamlessly integrating just three zones.

The researchers claim that the manufacturing cost of their proposed mirror design would be cheaper than the mirror design with the added small wide-angle viewing section. Since mirror designs are stipulated by national automobile regulations, the new design would need to be approved for use in the United States before appearing on cars here.