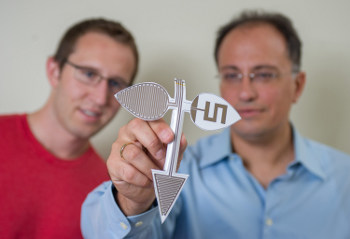 A Georgia Tech-led research team has been awarded a $2 million grant from the National Science Foundation (NSF) to develop a unique approach to making extremely compact and highly efficient antennas and electronics. The new technology will use principles derived from origami paper-folding techniques to create complex structures that can reconfigure themselves by unfolding, moving, and even twisting in response to incoming electromagnetic signals.

These novel structures could be fabricated from a wide variety of materials, including paper, plastics, and ceramics. Sophisticated inkjet printing techniques would deposit conductive materials such as copper or silver onto the antenna elements to provide signal-receiving and other capabilities.

Several potential activation mechanisms would allow the origami-shaped antennas to rapidly unfold in response to various incoming signals. These mechanisms include the harvesting of ambient electromagnetic energy in the air, as well as the use of chemicals that produce movement in ways that mimic nature.

"Traditionally, antennas have been sizable -- often very large -- and any reconfiguration required complex electronics technology like micro-electromechanical systems (MEMS)," said Manos Tentzeris, a professor in the Georgia Tech School of Electrical and Computer Engineering. "We expect these tiny new antennas to morph -- to fold, unfold and reconfigure themselves -- using self-activation mechanisms that in many cases would not require electronics or electrical power." 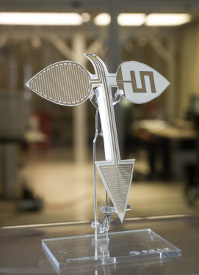 The result would be powerful, ultra-broadband capabilities in a diminutive antenna measuring only a couple of centimeters when folded. Commercial and military applications for such antennas could include many types of communications equipment, as well as wireless sensors, "smart skin" sensors for structural health monitoring, portable medical equipment, electronics mounted on vehicles or flying/space platforms, agricultural sensors, and cognitive electronics that adjust to ambient conditions in real time.

Origami is a traditional paper-folding art that is prominent in Japan and also practiced elsewhere, and includes both modular and moving types of structures. In recent years, mathematicians worldwide have focused on theoretical and practical questions raised by origami. Technical advances -- such as novel ways of folding vehicle airbags -- have resulted.

The Tentzeris team is working with mathematicians at Georgia Tech and elsewhere to develop formulations that will allow optimal exploitation of origami-related principles. One important goal, Tentzeris said, is to maximize the number of shapes that can be achieved in a single folding structure. That, in turn, will support antenna functionality.

"This is a major challenge -- to increase the shapes you can pack into a device of a specific size," he said. "Additional mathematical study could result in being able to form 16, 32, 64, or even more different types of antennas from a single device that's less than an inch square when folded."

Etnyre will focus on the mathematics of origami-shaped devices. Georgakopoulos will perform a significant set of tasks focused on resonators and related prototypes, while actively participating in the modeling procedure. Various international origamists will participate in this effort by introducing novel origami shapes and folding algorithms.

One element essential to the project is the concept of self-actuation: antennas unfolding by themselves.

In some cases, Tentzeris said, unfolding would happen automatically when a specific incoming frequency triggered a chemical activation mechanism. This kind of mechanism is related to the ability of plants, like daylilies, to unfold in response to a stimulus such as light.

In other cases, energy harvested from ambient electromagnetic energy in the air could provide power for activation, said Benjamin Cook, a graduate student working with Tentzeris on the project. Antenna deployment could be powered by built-in circuits that collect energy from such ambient airborne signals as TV and radio signals -- a technique already demonstrated successfully by a Tentzeris research team. 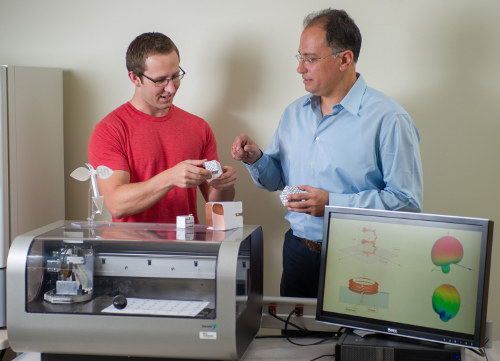 When required, antenna movement could be powered by activation beams from a special-purpose energy harvester. This device would collect ambient energy and transmit it to antennas from as far away as 50 to 100 meters. Novel wireless power transfer architectures, currently being investigated in another joint NSF project of Tentzeris and Georgakopoulos, could further enhance the range of beam-power transfer.

Inkjet printing will also be essential to the development of origami antennas, Tentzeris said. Special inkjet techniques developed in recent years by Tentzeris and his team can deposit tiny antenna circuitry and supporting electronics, dielectrics, and nanostructures onto a broad variety of materials.

Such materials could consist of paper, polymers, fabrics, carbon fibers, ceramics, and flexible organics, depending on the application. When necessary, the origami-shaped antennas could be ruggedized using robust materials.

Metallic inks -- formulated with a wide variety of conductive materials such as copper, silver, gold, nickel, and cobalt -- would be used. The choice of material would depend on the specific functionality required.

"My group's extensive research into inkjet printing will be critical to this project," Tentzeris said. "We have developed what I believe is the unique capability of being able to deposit multilayer conductors, nanostructures, and dielectrics on virtually any material, for applications up to the millimeter-wave and sub-terahertz frequency range."

This research was supported by the National Science Foundation (NSF) under award EFRI-1332348. Any opinions or conclusions are those of the authors and do not necessarily reflect the official views of the NSF.