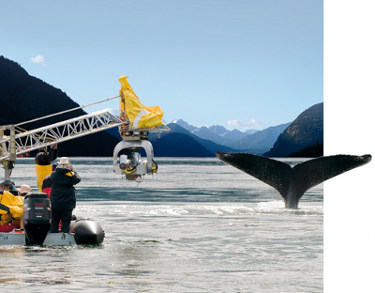 In the rugged environment of the ocean, making brilliant films is far from easy. To shoot the "OCEANS" documentary, French film company "Galatee Films" required some advances to be made to existing camera technology.

The challenge of creating the necessary camera stability to ensure that shudder-free images could be shot from a permanently shaky surface was a particularly difficult task for the developers. A gyroscopic mounting platform with several DC micromotors proved to be the perfect solution.

Shooting high-quality nature films is hard enough on land, but even more challenging at sea. For one thing, the crew is much more dependent on the weather, and for another, the kind of travel required on location is extremely time consuming and cannot be repeated indefinitely. Then there's the annimals ... This means that each take must produce the perfect shots. "Cut ... Take 2!" is seldom an option.

In this particular case, an 8-m-long and 2.5-m-wide rubber dinghy with a 200-hp outboard motor was chosen as the "assault vehicle." The inflatable was suitable for transporting the camera equipment in the shallow waters along the shoreline as well as out on the high seas. Onboard stabilization consisted of the Thetys platform, a 4.5-m jib crane and a stand to mount it on the boat. When attaching it to the bow, care had to be taken not to exceed the maximum allowable weight, so that the seaworthiness of the inflatable was not unduly impaired. These requirements meant that the 4.5-m-long crane weighing 300 kg had to be able to carry the stabilizing platform with 75 kg of its own weight, plus camera load. The platform itself can stabilize camera equipment weighing up to 40 kg. 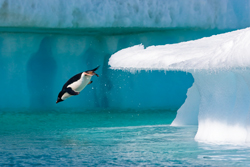 Fixed point in space
As is the case with aircraft, movement in a boat occurs in all three spatial directions. Lurching, rolling, and pitching are often accompanied by some hard knocks and mechanical impacts that all technical components must be able to withstand.

Shock-absorbing mounts can only block some of the occupational hazards of shooting at sea, such as motor vibrations. Since any equalizing movements have to occur in real time, rapid data processing is also called for, as well as a drive system that can quickly execute the related computerized commands with as little backlash as possible.

The necessary computations in this case are handled by a 1-GHz Pentium processor. The mounting plate for the camera is stabilized via three gyroscopes in all spatial directions. Optical tracking, to even out the fluctuating movements so that the lens is always focused on the right shot, is achieved via two drive systems per spatial axis.

Top performance in the tiniest space
The performance-inhibiting factors for rapid, dynamic, yet precise movements are breakaway torque, gear backlash, and drive efficiency. The non-linear behavior of these factors makes it harder for the computer to calculate the steering commands.

The actual drive consisted of a 24-VDC micromotor with a 38-mm diameter and matching planetary gearing supplied by FAULHABER.

"The main benefit of the drives," explains Jacques Perrin, director and co-developer of the stabilizing platform, "lies in their almost cog-free action. They also have no iron losses and offer high dynamic performance, thanks to low rotator inertia. The high performance ratio is a further plus for our purposes." 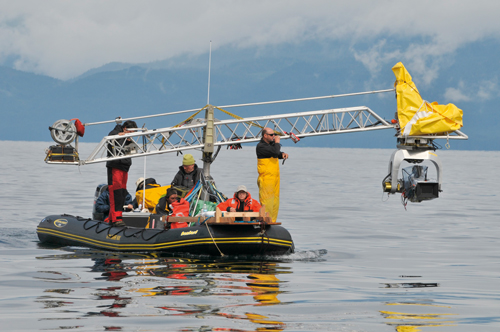 The motors weigh as little as 400 g but achieve 220 W. The triple-reduction gearing (with a reduction ratio of 1:64) increases the rated torque to 15 Nm. The maximum torque available for emergency situations (for example) is 30 Nm. In order to increase the response accuracy and minimize the backlash of the gears, two drives work on each axis in a push-pull arrangement. Weighing less than 2 kg, this drive is the optimal solution, due to both its rapid response and robust construction.

The chosen motor control system is also part of the FAULHABER product range. The 4-quadrant, switching pulse-width modulation facilitates high-precision motor movements. With up to 10 A, the controller also ensures the necessary power supply even during substantial equalization maneuvers. Modern micro drives and matching accessories like gears and control systems allow the complex actuators to be quickly assembled. Top performance in the tiniest space, minimal weight, yet high speed coupled with precise positioning make this an option that may well prove suitable for use in many other areas.

Especially if you speak French, there is more information about the "OCEANS" series at www.oceans-lefilm.com.