Cyrano the cat (above) is the first feline in the U.S to receive a Total Knee Arthroplasty (TKA). Femoral and tibial components were created with a direct metal laser sintering (DMLS) system from EOS.

For quite some time, Mr. Cyrano L. Catte II, an orange-and-white cat, had the perfect life. He had a nice home in Upperville, VA, more than adequate food, and owners who loved him very much.

Then, at the age of nine, he got bone cancer in his left hind leg.

Cyrano's owners spared no expense or effort. They took him to the University of Colorado, where he made instant veterinary history by being the first cat to receive stereotactic radiation (focused beams aimed at the tumor) therapy. Two sets of radiation cured his cancer -- full remission -- but one of the side effects was bone deterioration of his distal femur and some on the upper end of the tibia as well.

The normal procedure for such a condition would be to amputate the leg. In Cyrano's case, that was not recommended: he weighed 26 lb, and movement on three legs would be difficult. One potential alternative would be total knee arthroplasty (TKA): complete replacement of the cat's knee (stifle) with an artificial one. To explore this option -- a first in the U.S. for felines -- Cyrano's intrepid owners took him to the veterinary facility at North Carolina State University in Raleigh.

There the owners (and Cyrano) met with Dr. Denis Marcellin-Little, a veterinary surgeon and a professor of orthopedic surgery in the College of Veterinary Medicine at NC State. "It was clear that the procedure would present a number of challenges," Marcellin-Little says. "For one thing, we would need to design and build a very small implant." For another, the potential poor quality of the joint's bone structure made it advisable to anchor the implant components securely with stems inserted into the bones.

"Fortunately, I've worked with additive manufacturing processes for more than ten years," says Marcellin-Little. "They're very well-suited for fabricating a device this small and complex."

Design and DMLS
Much of the veterinarian's work with additive manufacturing (AM) has been on-campus, researching in tandem with Professor Ola Harrysson of the Industrial and Systems Engineering (ISE) department at NC State. Harrysson's areas of expertise include manufacturing and rapid prototyping, with much of his research focusing on medical applications. "Denis and I have teamed up to create over 300 models for practicing and designing surgeries," Harrysson says. "In recent years, we've started making bone plates and implants." 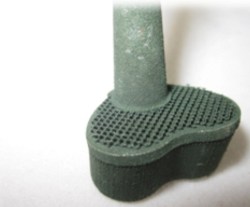 The porous mesh in the laser-sintered cobalt-chromium components of the knee implant -- created at the same time as the parts -- facilitates strong osseointegration.

Marcellin-Little discussed with Harrysson the requirements for Cyrano's operation and the challenges ahead. Early on, the men decided that they would make the two main components of the artificial knee using direct metal laser-sintering (DMLS) from EOS. "We had worked with EOS on some previous projects," Harrysson says. One of the projects was to manufacture an artificial jaw for a cat (who also had cancer). Another was a metal radius prosthetic for a small dog. In both cases, laser-sintering was used to "grow," layer-by-layer, the complex geometries needed for the final part.

DMLS can work with a number of different metals; two of them -- titanium and cobalt chromium -- are frequently used for implants. Each has its advantages. "Titanium is great for bone ingrowth," Marcellin-Little points out, "but it's much softer than cobalt chromium." The loads on a titanium femoral head would wear the metal down eventually. Because the implant components would already be thin in some places, they might be subject to breaking or cracking if they eroded still further. "Cobalt chromium was our best choice," Marcellin-Little says.

The selection of DMLS for manufacturing the knee was crucial to its design. The addition of the stems and the incorporation of features to match up with custom drilling and cutting guides gave the metal components shapes that were not readily manufacturable by traditional molding or subtractive cutting processes.

There was also the issue of the varied surface textures of the final device. "From an orthopedic standpoint, we wanted to include different types of surfaces," Marcellin-Little says. The two stems that extended inside the hollowed-out femur and tibia were slightly textured to promote bone ingrowth. Further up on the femoral and tibial components was an area of porous mesh to facilitate strong osteointegration. While the stems provided short-term stability for the implant, the textured and meshed surfaces would promote long-term stability. Finally, the bearing surface at the end of each cobalt chrome piece had to be extremely polished to enable smooth motion against the polyethylene tibial mobile bearing surface, which would rotate during leg movement.

A model of the assembled implant shows the stems that insert into the leg bones and the bolts that fix them in place. The complex shapes of these components would be difficult to make with traditional processes.

All these textures were possible, and fairly easy to create, by using additive manufacturing (laser sintering). "AM not only gives us design freedom for orthopedic implants," Harrysson says. "It also offers the means to build osseointegrated surfaces directly into the part." Traditionally manufactured implants often have surfaces added in post-processing, such as multiple layers of beads sintered on manually. More recently, designers have explored plasma spraying and other surfacing techniques, but they are not as accurate as DMLS, which allows designers to specify the pore size, density, and the layout of the porous section.

The road to the manufactured part
Key to the project was assembling a multi-talented design and manufacturing team. "This kind of implant had never been made before, and this surgery never attempted," Marcellin-Little says. "When we do it again, we could pull the team together with a few emails and phone calls, but for the first time it was a lengthy process."

"It sounds complicated," Marcellin-Little says, "but all these varied skill sets were important to making the best implant possible."

Design started with 3D data from CT scans of Cyrano's good and bad hind legs. 3D design models of the implant components were made using MIMICS software from Materialise. During this period, the team worked closely on multiple design iterations with experts from BioMedtrix.

"We started from one of BioMedtrix's knee implants for dogs that was much larger than Cyrano's implant, and miniaturized it," Marcellin-Little says. "That eliminated a lot of upfront work for us. Afterward we added the stems, the bolts that hold the stems in place, and other features unique to this design."

The result was very sophisticated compared to other feline implants currently in use. "We incorporated features from human devices," Harrysson says. "The trick was in making them small enough for a cat -- think of a finger joint prosthesis, which would be about the right size."

After several iterations and a thorough final review, the team sent the metal component models to EOS' global headquarters in Krailling, Germany for manufacture. The cobalt-chrome parts presented a special challenge: Although EOS had been adding surface roughness and porosity to titanium dental prostheses and implants for years, this was the first porous cobalt-chrome device they had produced. EOS successfully manufactured six sets of the metal components and shipped them back to the U.S. 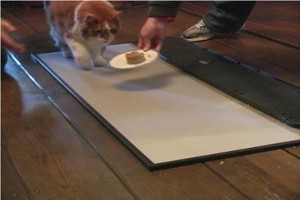 NC State personnel use a pressure-sensitive walkway to evaluate Cyrano's gait and progress two months after the operation. He is much more comfortable now and is able to use the leg and joint well.

When the DMLS components arrived from EOS, the team checked them for accuracy and fit, then sent them to BioMedtrix for finishing by a supplier. The supplier removed the greenish chromium oxide layer (caused by secondary heat treating on the parts), polished the load-bearing surfaces to a mirror finish, and sent the parts back. A final checkup confirmed that all dimensions were still correct and that features on the components lined up perfectly with the custom drill guide for the surgery. Now the DMLS parts were ready for handing off to the surgical team.

Surgery and recovery
Prior to the actual operation, the surgical team staged six rehearsals. Four were performed on plastic bone replicas manufactured via additive manufacturing processes, using Cyrano's CT data. These rehearsals used the actual implant. Two more rehearsals involved cadaver surgeries to practice the soft tissue reconstruction. The implant's small size made finding geometric data points to connect drill guides to the tibial and femoral components quite challenging. "In retrospect, we would have been unable to do the surgery without these rehearsals," Marcellin-Little says.

All that preparation paid off. The actual surgery, which took six hours, went smoothly. "As we suspected, Cyrano's distal femur had very poor bone quality," Marcellin-Little notes. "Without the stems that we had designed in, the femoral component would not have been stable at all, even if we had used polymethylmethacrylate bone cement." At the end of surgery, radiographs showed good fit and optimal placement for the implant. Now Cyrano began the long road of rehabilitation and therapy that would lead to his recovery.

For the first three months he was closely monitored and did well. Toward the end of that time he underwent gait assessment on a pressure-sensitive walkway built especially for cats. He has an observable limp, but he is able to use the leg and joint. "Cyrano was a perfect patient, very cool and very calm," Marcellin-Little says. "He is much more comfortable than he had been since the cancer developed, and he's pleased, and his owners are pleased." 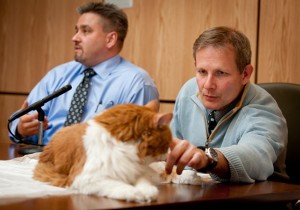 The researchers at NC State are pleased as well. What was learned from the Cyrano project is transferable to other animals and even to human medicine. "Now that we know how to miniaturize a joint this sophisticated," Harrysson says, "there are a number of potential applications, in hands or jaws, for example."

In some ways, one of the greatest benefits of this project will be the additional experience the researchers gained by designing for additive manufacturing. "When I look back and compare the implants we were building with AM ten years ago to what we design now, it's like night and day," Marcellin-Little says. "The recent ones are more refined, more precise, and more sophisticated."

He adds, "The main change this technology has brought is that the manufacturing process is no longer a barrier to the imagination of an orthopedic clinician who needs to create something very specific."