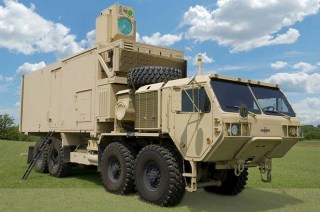 The Army used a vehicle-mounted high-energy laser for the first time to successfully engage more than 90 mortar rounds and several unmanned aerial vehicles in flight.

This was the first full-up demonstration of the HEL MD in the configuration that included the laser and beam director mounted in the vehicle, according to officials of the U.S. Army Space and Missile Defense Command/Army Forces Strategic Command. They said a surrogate radar, the Enhanced Multi Mode Radar, supported the engagement by queuing the laser.

The HEL MD is being developed to show directed-energy force-protection capabilities against rockets, artillery and mortars, known as RAM. It is also intended to protect against unmanned aerial vehicles, known as UAVs, and cruise missiles.

Mortars travel at low velocities for short ranges in high-arching trajectories. These weapons, as well as UAVs, are representative of the threat encountered by U.S. and allied forces on the battlefield, officials said.

The demonstration and testing confirms the capability of a mobile solid-state laser weapon system to counter mortars, UAVs, and intelligence, surveillance and reconnaissance sensors mounted on the UAVs, officials said.

The recent testing utilized a 10-kW class laser. In the future, a 50-kW class laser will be integrated into the HEL MD platform, officials said. The 50-kW laser is scheduled to be upgraded to a 100-kW class laser in subsequent demonstrations, they added.

The supporting thermal and power subsystems will also be upgraded to support the increasingly powerful solid-state lasers, according to USASMDC/ARSTRAT officials. They said these upgrades will increase the effective range of the laser or decrease required lase time on target.

The Boeing Company is the prime contractor for the HEL MD program.