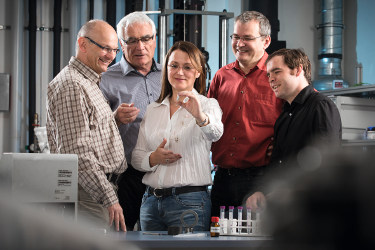 Thanks to a new type of lubricant, small gears can run with virtually no friction.

Although lubricants are widely used in motors, axles, ventilators, and manufacturing machines -- just for starters -- there have been almost no fundamental innovations for this product in the last 20 years.

Together with a consortium, the Fraunhofer Institute for Mechanics of Materials IWM in Freiburg, Germany, has developed an entirely new class of substance that could change everything: liquid crystalline lubricant.

Its chemical makeup sets it apart. Although it is a liquid, the molecules display directional properties like crystals do. When two surfaces move in opposite directions, the liquid crystal molecules between the two surfaces align themselves so that the frictional resistance is extremely low. This enables nearly frictionless sliding.

Liquid crystal is known for its use in liquid crystal displays (LCDs) in TV screens, mobile phones, or touchscreens. The unusual idea to use them as a lubricant was proposed by Nematel GmbH, which then turned to Fraunhofer IWM to see if it would work. There, Dr. Tobias Amann applied the lubricant made from liquid crystal between two metal workpieces. "Even in the first test, we measured extremely low friction coefficients," says Amann.

Match-shaped molecules form a liquid crystalline structure
The researchers at Fraunhofer IWM discovered that liquid crystal is well suited for lubricants because its molecules are long and thin. "When used as a lubricant between two surfaces that slide past each other, the molecules become aligned in parallel to each other in ordered boundary layers," explains Dr. Andreas Kailer, acting director for the Tribology business unit at Fraunhofer IWM. These layers are very stable but slide easily over each other, keeping friction and wear to a minimum.

Still, much was missing before a liquid crystal lubricant suitable for practical applications could be developed. Fraunhofer IWM launched a project along with Nematel GmbH and the lubricant experts at Dr. Tillwich GmbH in 2010, sponsored by the German Federal Ministry of Education and Research (BMBF). Susanne Beyer-Faiss, a chemist at Tillwich, improved the liquid crystal's stability with help from additives. At the same time, her colleague, Werner Stehr, built a special test unit that uses laser technology to enable contact-free measurement of the extremely low friction coefficients.

Tobias Amann deciphered the mechanisms that are responsible for these ultra-low frictional coefficients and discovered how to further optimize the new lubricants in specific ways. He also examined the chemical mechanisms displayed during friction and the effects of mixing different liquid crystal molecules.

When the project came to an end, the partners had produced a liquid crystalline lubricant prototype that performed best in sliding bearings made of iron. For this pioneering work, Dr. Tobias Amann, Dr. Andreas Kailer, Susanne Beyer-Faiss, Werner Stehr, and Dr. Holger Kretzschmann received the Stifterverband Science Prize, which is awarded every two years for scientific excellence in applied research projects.

Currently, the award winners are developing innovative sliding bearings lubricated with liquid crystal for small electric motors for use in the automobile industry, for instance in alternators or windshield wiper motors.