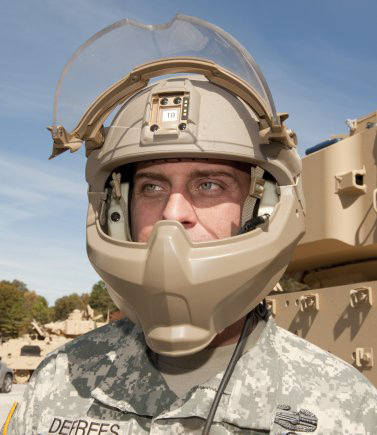 The U.S. Army is looking at helmet prototypes with optional parts to protect the face and jaw from various threats, including blast waves. But, as Dr. David Mott -- an aerospace engineer at the U.S. Naval Research Laboratory (NRL) -- says, more parts lead to more surprises. He and colleagues Ted Young and Doug Schwer published their findings with the American Institute of Aeronautics and Astronautics in June 2014.

Says Mott, "[Army] was interested in seeing how different combinations of the optional components -- including the face shield, including the mandible protection -- affected the blast loading on the head." NRL's research is part of an effort across the Department of Defense (DoD) to better protect war fighters from improvised explosive devices (IEDs).

In 2014, the Army concluded a study of the Helmet Electronics and Display system - Upgradeable Protection (HEaDS-UP), which was a multi-year effort to develop integrated headgear technologies for the ground Soldier and Marine. The program, managed by Donald R. Lee II at the Natick Soldier Research, Development, and Engineering Center, considered potential upgrades for safety and integration with other equipment (like communications and display technologies).

Says Lee, "As the Army looks to develop and field personal protective systems for the future, we need to get a better understanding of how this equipment affects the Soldier. Characterizing blast overpressure is still a relatively new endeavor, and the work conducted by NRL is one piece of a very large puzzle."

Mott can't offer a simple conclusion about which helmet geometry is best for every IED scenario, even within the parameters of his study -- let alone given the many in-theatre variables, like the intensity and location of the IED, how the face and body of the solider are oriented, or other structures that could reflect shock waves.

He also says that helmets must deliver a lot more than just blast protection. "Helmets are required to protect against a combination of threats, including ballistic and blunt impacts," he says. NRL's research is helping DoD better understand how the shape of the helmet matters in an IED environment, so DoD can pursue designs that combine protection for multiple threats and capabilities.

2008: Understanding how blast waves "underwash" through gaps
In 2008, NRL tested military helmets for the U. S. Marine Corps, in collaboration with counter-threat solutions provider Allen-Vanguard. The researchers set off an explosion near a mannequin, which had pressure sensors on its head. "After the initial wave hit, they were getting some additional spikes in the pressure on the forehead," says Mott, "and it wasn't clear where these spikes were coming from."

In NRL's Laboratory for Computational Physics and Fluid Dynamics, Mott, Young, and Schwer ran computer simulations of the experimental setup. "We were able to show that the [forehead pressure spikes] were actually part of the physics that was going on with the mannequin and the helmet, and not stray reflections from the experimental setup," says Mott.

The simulations showed the incoming wave of pressure can, as he says, "infiltrate the gap between the head and the helmet shell." Sometimes called underwash, the effect has since been studied with various helmet types and reproduced by other investigators.

The pressure waves that infiltrate under the brim can then converge under the helmet. This causes "high pressures on the side of the head away from where the blast originated." Trapped, the high pressure can then send a wave back toward the blast source, and this effect caused the forehead sensor in the 2008 experiments to "pick up a spike as that wave was exiting from under the helmet." 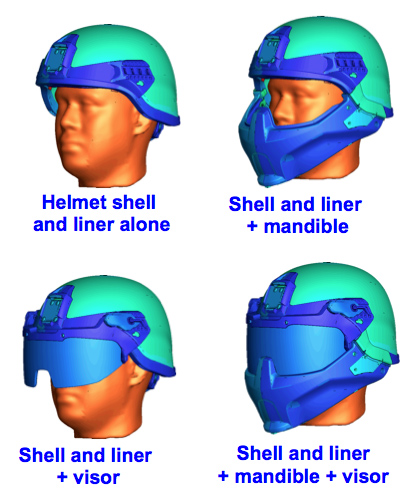 NRL tested four configurations of an Army helmet prototype against computer simulations of blast waves from various directions. "Multiple shocks interacting with each other can amplify the pressure, as can reflections off the structures that are in the suspension," says Dr. David Mott, the lead author of the paper on the project. [Image: U.S. Naval Research Laboratory]

What NRL learned from the simulation data would have been very hard, perhaps impossible, to obtain from experiments alone. "Experiments are important, particularly at the beginning of a project," says Mott. But once the experiments have illuminated the relevant physics and validated the computational model, he says, "you can often look at lots of different scenarios much more cheaply, more efficiently, and faster than you could if you had to do all those tests experimentally."

2013: Options with Army prototype helmet alter blast wave effects
Mott and his colleagues worked to solve the differential equations describing the underlying physics (think back on your school days to conservation of mass, conservation of momentum, conservation of energy) to predict a flow field. "It's all very physics based, it's all going back to the governing laws," says Mott.

The IED simulations start with computing a blast in air, sending out a spherically expanding pressure wave that reflects off the ground.

The researchers then add the complex mannequin geometry in front of the expanding wave. "The model that the Army provided us is the head itself, and then all the different helmet components," says Mott. The 2008 study demonstrated that wave reflections from the body play a significant role, so they added a neck and torso. After refining the geometries, they were ready for testing. "For fluid dynamics, you need them to be water tight," Mott says.

"So basically, we can just turn off and on the different pieces of equipment for each run. And we can rotate the geometry so the blast is coming at the mannequin from a different direction."

As the helmet variants got more complicated, so did the wave behavior. "When you start adding these extra pieces of equipment, you don't always get what you expect," says Mott. "Multiple shocks interacting with each other can amplify the pressure, as can reflections off the structures that are in the suspension." (Suspension refers to the pads or lining inside a helmet.) 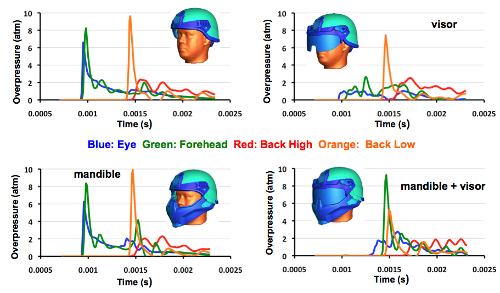 Pressure changes on the head after a front-facing blast for each of four Army prototype configurations. "When you start adding these extra pieces of equipment," says Dr. David Mott of his research at NRL, "you don't always get what you expect." [Image: U.S. Naval Research Laboratory]

Mott points to a figure showing what happens with an explosion from the front. When using just the helmet shell and suspension, the shock wave hits the face, creating a pressure spike on the eye. The wave also reflects from the suspension under the front of the helmet, causing a pressure spike on the forehead. "Now when you add the face shield, it keeps that direct hit from happening. A weaker wave still refracts around the bottom of the shield and reaches the face, but you significantly reduce the pressure on the forehead and the eyes by adding that shield."

If the simulation includes the mandible shield with the face shield, again, most of the initial wave is deflected -- "but an even weaker form of [the initial wave] will still get in this little gap underneath the mandible," he says. Now, in pursuit, comes a wave that's been reflected off the torso. It's captured under the mandible shield and directed over the face. "These two waves combine into a stronger wave, and reflect off that suspension on your forehead, and you get a pressure spike on your forehead. It's comparable -- it's actually even a bit larger -- than what you had on the forehead when you didn't have the face protected at all. So that's one of those unexpected results." 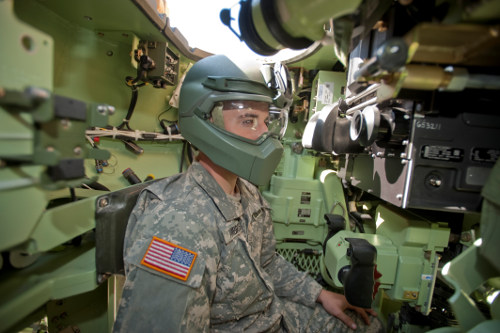 The new integrated helmet technology would eliminate the need for crew members to switch to their Army Combat Helmets when dismounting from their vehicles. [Photo Credit: David Kamm, NSRDEC Photographer]

Mott emphasizes that helmet blast response is complex; an increase in the peak pressure in one location on the head is typically accompanied by reductions in other locations. Today's helmets provide significant protection from blast pressures as compared to no helmet at all, not to mention protection from ballistic and blunt-force impacts as well.

NRL's research suggests some general trends about protecting from blast waves, but they'd like to run more studies. "The direction we're going is including the material response, including a more complete body geometry and other equipment," says Mott. The work they've published so far assumed a rigid head and body, but the body is supple and responsive to pressure. He's also interested in testing other design modifications to the helmet and suspension, and different ways to integrate the helmet with body armor. 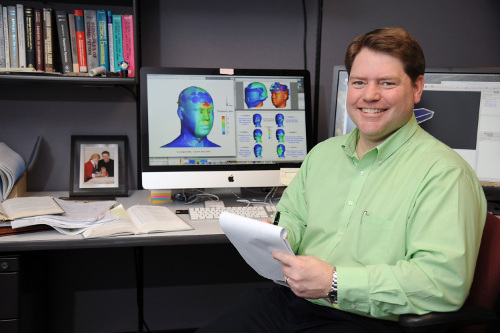 Asks Mott, "Can we make the next generation of equipment better, so that we're providing not only protection, but also cooling to make the Marine more comfortable, less fatigued, and better able to focus on his or her job?"

Protecting our troops while enabling them to perform at their best is a complicated riddle, but Mott is confident in his group's expertise. "The advantage that we have for [the military] is that we have a strong expertise, a very long history, in fluid dynamics: characterizing, predicting, and describing complex flows. And so we offer expert analysis and understanding of these flow fields and complex geometries, under conditions relevant to the warfighter."

Additionally, the lab has experts in combustion and propulsion, researchers improving sensors to detect toxic agents, and astrophysicists looking at supernova explosions. "What unifies it all is that many of the basic underlying physical processes are similar," he says.