Imagine staying dry underwater for months. Now Northwestern University engineers have examined a wide variety of surfaces that can do just that -- and, better yet, they know why.

The research team is the first to identify the ideal "roughness" needed in the texture of a surface to keep it dry for a long period of time when submerged in water. The valleys in the surface roughness typically need to be less than one micron in width, the researchers found. That's really small -- less than one millionth of a meter -- but these nanoscopic valleys have macroscopic impact.

Understanding how the surfaces deflect water so well means the valuable feature could be reproduced in other materials on a mass scale, potentially saving billions of dollars in a variety of industries, from antifouling surfaces for shipping to pipe coatings resulting in lower drag. That's science and engineering, not serendipity, at work for the benefit of the economy.

"The trick is to use rough surfaces of the right chemistry and size to promote vapor formation, which we can use to our advantage," said Neelesh A. Patankar, a theoretical mechanical engineer who led the research.

"When the valleys are less than one micron wide, pockets of water vapor or gas accumulate in them by underwater evaporation or effervescence, just like a drop of water evaporates without having to boil it. These gas pockets deflect water, keeping the surface dry," he said. 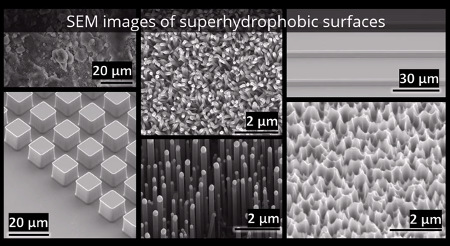 In a study published Aug. 18 by the journal Scientific Reports, Patankar and his co-authors explain and demonstrate the nanoscale mechanics behind the phenomenon of staying dry underwater.

In their experiments, the researchers used a variety of materials with and without the key surface roughness and submerged them in water. Samples with the nanoscale roughness remained dry for up to four months, the duration of the experiment. Other samples were placed in harsh environments, where dissolved gas was removed from the ambient liquid, and they also remained dry.

"It was amazing and what we were hoping for," said Patankar, a professor of mechanical engineering in the McCormick School of Engineering and Applied Science. "My lab likes to defy normal experience. In this work, we looked for properties that manipulate the water phase changes we know." 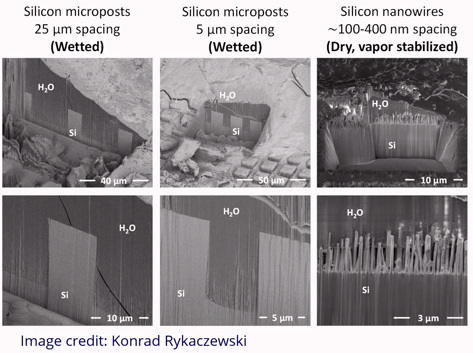 The researchers also report that nature uses the same strategy of surface roughness in certain aquatic insects, such as water bugs and water striders. Small hairs on the surfaces of their body have the less-than-one-micron spacing, allowing gas to be retained between the hairs.

"These gas-retaining insects have surface properties consistent with our predictions, allowing them to stay dry for a long time," said Paul R. Jones, the study's first author. He is a Ph.D. student in Patankar's research group.

The researchers focused on the nanoscopic structure of surfaces, which, at the nanoscale, are somewhat akin to the texture of a carpet, with tiny spike-like elevations separated by valley-shaped pores in between. 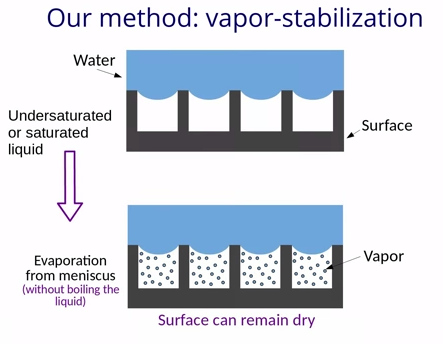 When submerged, water tends to cling to the top of the spikes, while air and water vapor accrue in the pores between them. The combination of trapped air and water vapor within these cavities forms a gaseous layer that deters moisture from seeping into the surface below.

"When we looked at the rough surfaces under the microscope, we could see clearly the vacant gaps -- where the protective water vapor is," Patankar said.

Historically, scientists had not understood how to keep water vapor from succumbing to condensation within the pore, which can cause water to wet the surface. But the Northwestern team found the molecular key: They demonstrated that when the valleys are less than one micron in width, they can sustain the trapped air as well as vapor in their gasified states, strengthening the seal that thwarts wetness.

The Initiative for Sustainability and Energy at Northwestern (ISEN) supported the research.