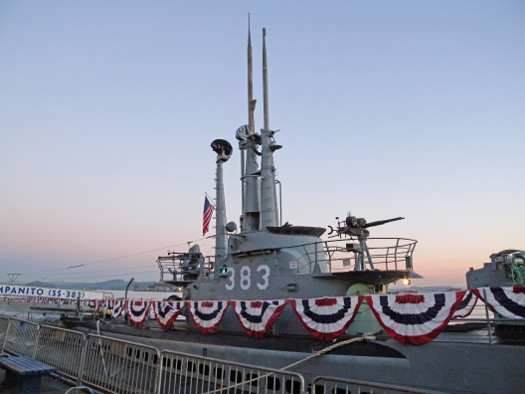 The historic World War II-era submarine USS Pampanito at dock at Fisherman's Wharf, San Francisco, recently had its hydraulic systems upgraded with the installation of a Rexroth RexPak hydraulic power unit. During WWII, if the submarine swept the sea clear of its enemies they would raise a broom on the periscope shears to signal a successful mission.

One of the most popular attractions at San Francisco's historic Fisherman's Wharf is the World War II submarine the USS Pampanito. Over 110,000 people visit the Pampanito annually, a Balao-class submarine which had six combat patrols in the Pacific War and is now a U.S. National Historic Landmark.

Operated by the non-profit San Francisco Maritime National Park Association, the Pampanito has been restored by association volunteers to a specific point in time (late 1945) to represent the height of WWII submarine development. This restoration effort includes making key submarine systems fully functional, so visitors can see the periscope being raised and lowered, and the torpedo doors being opened and closed.

To accomplish this goal, the Pampanito needs efficiently functioning hydraulics -- and Bosch Rexroth was glad to assist, contributing a custom-configured RexPak hydraulic power unit to help bring the ship's systems to life. 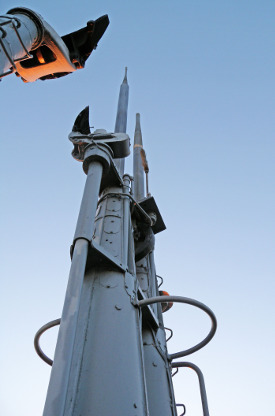 With the RexPak hydraulic power unit, hydraulic power can be more easily and efficiently supplied to the submarine's systems, so that visitors to the Pampanito have the opportunity to experience things like how the periscope works.

Working memorial to the Pacific War
Since the association took possession of the boat in 1976, it has undergone multiple restoration projects, including four separate dry-dock visits. Almost all of the ship's systems have been restored; as a result, much of the onboard electrical and mechanical equipment is now functional.

"As much as possible, we try to utilize 1940s-era technology for the restorations," said Richard Pekelney, secretary on the association's board of trustees. "However, for some systems, we find it's more effective for us to utilize modern equipment, like the Rexroth RexPak hydraulic unit."

There are three hydraulics-powered ship systems that have been restored to working condition: the external bow planes used in navigating the ship, the torpedo tube doors, and the ship's periscope. Until recently, hydraulic power was supplied to this equipment by the boat's original "air-over-hydraulics" unit: high-pressure air is pumped into a hydraulic accumulator, creating the necessary hydraulic oil pressure to operate this equipment.

This air-over-hydraulics system presented some difficulties: It takes up to a full day to get the high-pressure air system running, and there are safety considerations that required proper training for its operation, which usually required the assistance of a naval veteran with background in operating a pneumatic-hydraulics system. Volunteers provide virtually all the restoration, maintenance, and operation work performed on the Pampanito, so keeping the pneumatic-hydraulic system well maintained and running was problematic, limiting the times it could be operated.

A former Navy submariner who volunteers on the sub decided to find a better, simpler solution. All it took was a hand-drawn sketch on a piece of paper.

One volunteer's passion for the Pampanito
Charlie Butcher is the equipment manager for Northern California at Manson Construction Co. (Seattle, WA), one of the nation's leading heavy civil marine construction and dredging companies. He's also a retired U.S. Navy Master Chief Petty Officer and submariner with 30 years of service in the U.S. Navy and Navy Reserves. Manson Construction has long supported the restoration and historic operation activities of the Pampanito as a museum ship by taking care of moorings and other maintenance.

"Initially, I wanted to find a simple pressure-compensated hydraulic pump to raise the periscope," said Butcher. In discussions with Pekelney, it became clear that being able to open the torpedo tube doors and move the boat's bow planes was a priority as well, which would make it easier to perform hull maintenance when the submarine goes into dry-dock.

A new unit to supply hydraulic power
As Butcher and Pekelney refined their hydraulics requirements, Butcher contacted Bill McDaniel, account manager at Hydraulic Controls (Emeryville, CA), one of the leading suppliers of hydraulic components in the Pacific Southwest and a Bosch Rexroth distributor partner.

That's where the sketch comes in. "We knew we would need a larger solution than just a simple pump," Butcher said. "I made a little design sketch, since I knew the boat's hydraulic systems, and sent it off to everybody to see what we could work out." 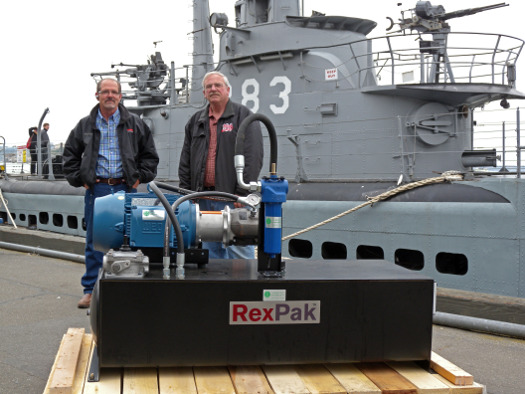 According to McDaniel, the sketch Butcher provided, along with his descriptions of the boat's hydraulics requirements, led him to consider several Rexroth options. "At first, we looked at using a closed-coupled motor package," he said. "But after consulting with Rexroth, we decided that the RexPak hydraulic unit was a better option. We could supply a complete package, test it, make sure everything was good to go, and ship them the whole system."

The RexPak hydraulic power unit bridges the gap from standard market products to custom-engineered power units. Designed for a variety of applications that require hydraulic power up to 75 horsepower (HP) and 65 gallon-per-minute flow (GPM), with operating pressures to 3,200 lb per square inch (PSI), each RexPak system is custom configured from a core set of components: motor, pump, fluid reservoir, and associated control valves.

Although each RexPak solution is unique, units are built from readily available Rexroth hydraulics products and can be designed, configured, and delivered in as little as six weeks. 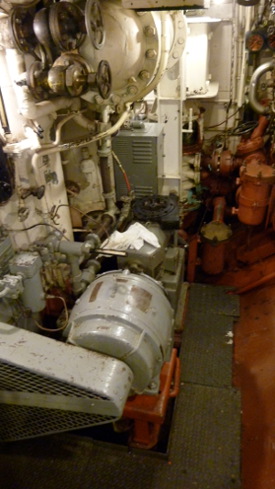 The RexPak unit's compact design made it well-suited for the tight confines in the Pampanito's engineering spaces; it was also easy to integrate into the WWII era equipment on the ship.

RexPak offers the perfect fit
McDaniel worked with Bosch Rexroth to create the Pampanito's RexPak configuration. They used the RexPak Design Engine, an online configuration tool that captures the key data needed to configure a RexPak hydraulic power unit. "It was extremely helpful in guiding us to determine the right configuration to provide the hydraulic pressure required to operate the boat's equipment," McDaniel said. "It gave us all the right questions to ask -- the weight of the bow planes and the periscope, how much hydraulic fluid is accumulated from the forward engine room, the distances between the hydraulic power unit and the equipment it will operate, and so forth."

For the Pampanito, the RexPak is configured with a 71-cc Rexroth A10VSO axial piston pump driven by a 15-HP motor, providing a 30-GPM flow and supplying a maximum working pressure of 750 psi. The unit includes an 80-gallon hydraulic fluid reservoir, a mounted inline relief valve, pressure gauge, and both return and pressure filters.

According to Butcher, this configuration provides sufficient hydraulic power to demonstrate how the different pieces of equipment on the boat work, and allows the 2,000-lb periscope to be raised and lowered at its original speed.

Each piece of equipment being demonstrated is operated independently, so the RexPak does not have to supply hydraulic power to all three systems simultaneously. And since the RexPak has been integrated into the boat's existing hydraulic lines, the boat's original controls on the bridge and in the engine and torpedo rooms can be used to demonstrate how the equipment originally operated.

According to McDaniel, the RexPak Design Engine system also helps Butcher and his fellow volunteers with detailed documentation. "It provides an engineered drawing and a detailed datasheet of every component, so we could take the original sketch and make it into something formal in a very short period of time." 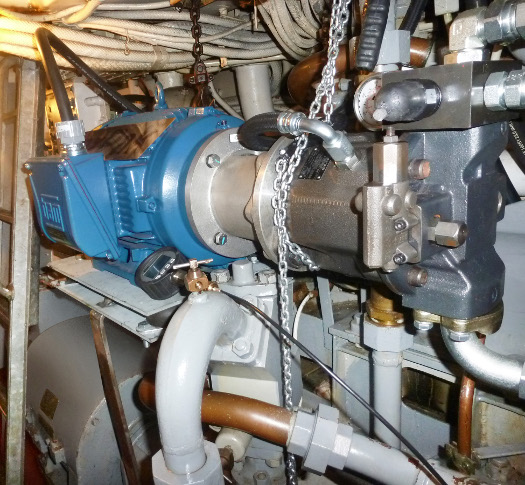 The RexPak hydraulic power unit, installed in the engine room, supplies hydraulic pressure to multiple pieces of the ship's equipment, including the periscope, bow planes, and torpedo tube doors.

Donations support hydraulics restoration
Butcher believed the RexPak unit would work well in the Pampanito, due to its modularity and ease of integration with the boat's existing hydraulics piping and controls -- even though much of that equipment is decades old. The team was able to install the Rexroth equipment in such a way that the ship's original hydraulics plant can still be operated with the modern technology, to retain the museum ship's authenticity.

"We wanted to keep the functionality of the original system," he said. "We had to install some special flanges and mounting brackets in some places, but in most cases you can't even tell that the system's there." Technicians were able to fabricate brackets to take advantage of existing bolts and holes to support the RexPak pump, motor controller, hydraulic fluid filters, and other system elements.

Using the RexPak unit will help the Pampanito save energy, since it takes much less power, compared to running the high-pressure pneumatic air compressor. And the system can be easily broken down into its constituent parts and carried piece by piece below decks, then reassembled. According to Butcher, this helped simplify installation.

The RexPak unit is also much easier to operate, which means many more volunteers, not just veterans, can be trained on it, so the periscope and other systems can be demonstrated more frequently to visitors eager to see the authentic submarine.

The valuable time and effort to get the right solution for the Pampanito's hydraulic restoration was all donated -- as was the RexPak unit itself: Bosch Rexroth provided the system at cost to its distributor partner Hydraulic Controls Inc., who donated the system, as well as their time. And, of course, Charlie Butcher has been donating all his time, along with other Manson Construction Co. technicians, to configure brackets and other supporting materials to complete the project.

The 30-year Navy man and former submariner appreciates how the RexPak makes some of the more popular Pampanito sub equipment operational. "Everyone wants to look out the periscope," said Butcher. "From the young people to the World War II submarine vets and their wives, they all like to see things in operation, so we know the visitors will really appreciate it."