An immensely powerful yet invisible force pulls water from the earth to the top of the tallest redwood and delivers snow to the tops of the Himalayas. Yet despite the power of evaporating water, its potential to propel self-sufficient devices or produce electricity has remained largely untapped -- until now.

In the June 16 online issue of Nature Communications, Columbia University scientists report the development of two novel devices that derive power directly from evaporation -- a floating, piston-driven engine that generates electricity causing a light to flash, and a rotary engine that drives a miniature car. 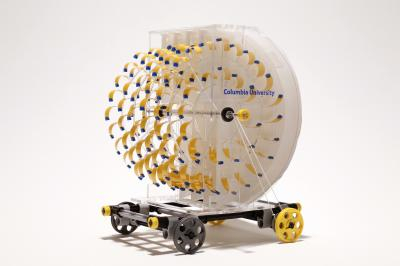 Eva, the first evaporation-powered car, has a turbine engine that rotates as water evaporates from a wet paper lining the walls of the engine. [Credit: Xi Chen, Columbia University]

When evaporation energy is scaled up, the researchers predict, it could one day produce electricity from giant floating power generators that sit on bays or reservoirs, or from huge rotating machines akin to wind turbines that sit above water, said Ozgur Sahin, Ph.D., an associate professor of biological sciences and physics at Columbia University and the paper's lead author.

"Evaporation is a fundamental force of nature," Sahin said. "It's everywhere, and it's more powerful than other forces like wind and waves."

Last year, Sahin found that when bacterial spores shrink and swell with changing humidity, they can push and pull other objects forcefully. They pack more energy, pound for pound, than other materials used in engineering for moving objects, he reported in a paper published in Nature Nanotechnology, which was based on work Sahin had started as a Scholar in Residence at the Wyss Institute for Biologically Inspired Engineering at Harvard University.

Building on last year's findings, Sahin and his Columbia colleagues sought to build actual devices that could be powered by such energy.

To build a floating, piston-driven engine, the researchers first glued spores to both sides of a thin, double-sided plastic tape akin to that in cassette tapes, creating a dashed line of spores. They did the same on the opposite side of the tape, but offset the line so dashes on one side overlapped with gaps on the other. 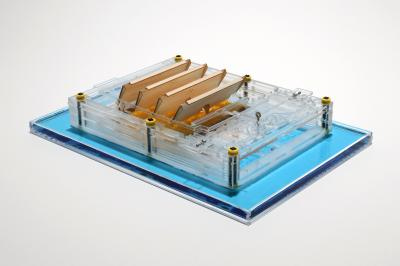 The evaporation engine floats on the surface of water. It creates piston-like back-and-forth motion as the water evaporates from the surface. The movement of the engine produces electricity when connected to a generator. [Credit: Xi Chen, Columbia University]

When dry air shrinks the spores, the spore-covered dashes curve. This transforms the tape from straight to wavy, shortening the tape. If one or both ends of the tape are anchored, the tape tugs on whatever it's attached to. Conversely, when the air is moist, the tape extends, releasing the force. The result is a new type of artificial muscle that is controlled by changing humidity.

Sahin and Xi Chen, a postdoctoral fellow in his lab, then placed dozens of these tapes side by side, creating a stronger artificial muscle that they then placed inside a floating plastic case topped with shutters. Inside the case, evaporating water made the air humid. The humidity caused the muscle to elongate, opening the shutters and allowing the air to dry out. When the humidity escaped, the spores shrank and the tapes contracted, pulling the shutters closed and allowing humidity to build again. A self-sustaining cycle of motion was born.

"When we placed water beneath the device, it suddenly came to life, moving on its own," Chen said.

The spore-covered artificial muscles function as an evaporation-driven piston. Coupling that piston to a generator produced enough electricity to cause a small light to flash.

"We turned evaporation from a pool of water into light," Sahin said.

With its current power output, the floating evaporation engine could supply small floating lights or sensors at the ocean floor that monitor the environment, Chen said, speculating that an improved version with stickier plastic tape and more spores could potentially generate even more power per unit area than a wind farm.

The Columbia team's other new evaporation-driven engine -- the Moisture Mill -- contains a plastic wheel with protruding tabs of tape covered on one side with spores. Half of the wheel sits in dry air, causing the tabs to curve, and the other half sits in humid environment, where the tabs straighten. As a result, the wheel rotates continuously, effectively acting as a rotary engine.

The researchers next built a small toy car, powering it with the Moisture Mill, and were successful in getting the car to roll on its own, powered only by evaporation. In the future, Sahin said, it may be possible to design engines that use the mechanical energy stored in spores to propel a full-size vehicle. Such an engine, if achieved, would require neither fuel to burn nor an electrical battery.

A larger version of the Moisture Mill could also produce electricity, Sahin said, suggesting a wheel that sits above a large body of water and evaporates saltwater, causing the wheel to rotate and generate electricity. This development would steadily produce as much electricity as a wind turbine, Sahin said.

Sahin's work on this project was funded by the U.S. Department of Energy, Office of Science, and the David and Lucile Packard Fellows Program.