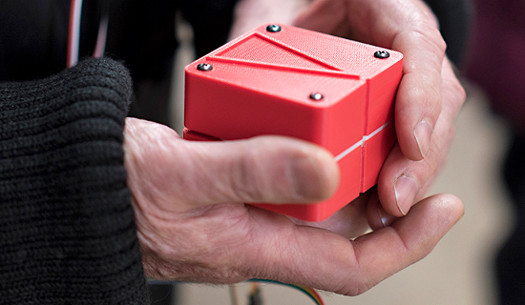 Combine mechanical engineering, experimental theater, and an old dark church, and you're bound to get some interesting results -- a new navigation device, for instance.

That's what happened when Yale University engineer Adam Spiers, a postdoctoral associate in the robotics lab of associate professor Aaron Dollar, worked on a London-based interactive production of "Flatland." Based on Edwin A. Abbott's 1884 story of a two-dimensional world, the production took place in an old church in London. The sighted and visually impaired audience members were kept in complete darkness most of the time as they wandered through the space four at a time while a spoken narrative and sound effects told the story.

Guiding them through the darkness were handheld, shape-shifting cubes that Spiers designed and created with 3D-printing technology. The user's position in the environment determines the shape of the wireless device. The top half of the cube twists to direct users toward their next destination and extends forward to indicate the distance to reach it. Rather than look at the device, as with a smartphone, users know where to go by feeling the changing shapes.

"The simple idea is that when you've arrived at your target destination, it becomes a little cube again," said Spiers, who specializes in the field of haptics, the sense of touch.

Extant, the London-based production company that put on the production, intended "Flatland" to be enjoyed equally by sighted and visually impaired people. The company itself has many visually impaired members, including its artistic director, Maria Oshodi. Spiers has been working with Extant and Open University professor Janet van der Linden since 2010. They first received funding from the U.K. government for a similar project that evolved into "Flatland."

Spiers originally called the device the Haptic Sandwich, but he's now leaning toward Animotus, the name that it took on in the "Flatland" story. 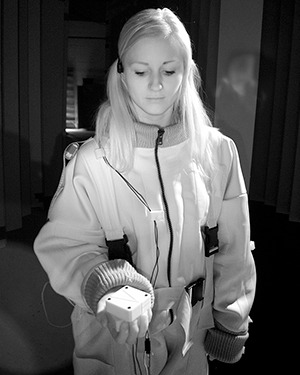 Spiers said building the device took some trial and error because there was little precedent for it. "Shape-changing is pretty new in haptics, so not a lot of people have done it before."

Spiers thinks the Animotus has potential to guide pedestrians and hikers while allowing them to fully appreciate their surroundings.

"I'd like to try this out for the outdoors -- hook it up to Google Maps and see what happens," he said.

It's designed to communicate unobtrusively. Too many haptics-based devices rely on vibration, he said, which can get annoying. Devices with audio cues are even more distracting, especially for people with visual impairments.

"Sound is pretty much how they appreciate the world," he said. "If you visit a city, you look around and you get an impression. That's what visually impaired people do also, but with audio."

During the "Flatland" production, audience members wore large suits, which housed equipment to track their movements. Spiers said he was surprised by how efficiently audience members traveled between the points on their routes, walking only .3 meters less per second than average.

"That implies that they were pretty confident as they were moving around," he said. "They only slowed down a little bit, despite being guided through an unknown dark space by a wholly unfamiliar technology."

Some unexpected results emerged during the production, including how users reacted to the device. For the final scene, audience members were guided to one spot, where the devices were "confiscated," followed by the sounds of the devices being destroyed.

"Some people found this very upsetting," Spiers said. "It's about 40 minutes that they were in there with the Animotus, so they got pretty emotionally attached to it."