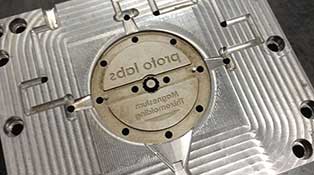 Long ago in a galaxy not far from here, fuel was cheap. Vehicles were large and not particularly efficient. Devices were heavy and tended to stay in one place, and iron was king. That was then; today, all that has changed. Energy is costly, vehicles are smaller and lighter, our devices travel with us in pockets or purses, and iron is something you pump for exercise. To meet our ever-growing demands for economy and portability, we have been steadily replacing iron with aluminum and plastic, and increasingly with magnesium.

Applications for magnesium
Magnesium is finding its way into a growing variety of applications, particularly those in which it helps reduce energy consumption. In aerospace applications, it's used in engines, airframes, and internal parts. In automotive applications, it turns up in steering components, seat and sunroof tracks, and interior frames, not to mention "mag" wheels. More recently, it's being used in roof, hood, and rear-deck lids, manifolds, cylinder head covers, and oil pans. It is even being tested for use in engine blocks. And for similar reasons, magnesium is showing up in motorcycle and bicycle parts, such as lightweight frames. In consumer applications, magnesium is often used in laptops, cell phones, digital cameras, power tools, and sporting goods. Military applications include hand-held communication devices, night-vision gear, and robotics.

This is for good reason. Magnesium is the lightest usable structural metal -- widely available and easy to produce. By weight, it's the seventh most common material in the Earth's crust and the third most common in seawater. It is found in every cell of the human body and is an essential element in the chlorophyll in green plants. Because of its reactivity, it is one of nature's more sociable elements and does not naturally occur in elemental form. It is, however, relatively simple to separate from its salts, and once in solid form, its surface oxidizes, producing a tenacious protective layer that resists further oxidation. Additionally, it can be coated by various means for further protection.

While it can be used in essentially pure form, magnesium typically is found in lightweight alloys, most commonly with aluminum, zinc, or manganese. It's nearly as strong as aluminum and about one-third lighter, giving it a significant strength-to-weight advantage. It has excellent electrical characteristics, excellent thermal conductivity, is reasonable in cost, and is easily recyclable. For these reasons, it's a very desirable material, and we can expect to see magnesium in a growing range of applications as technology for its use and fabrication continues to develop.

Besides machining, which is typically used when small numbers of parts are needed, the primary fabrication methods for magnesium are:

Die casting
Because the metal dies used in magnesium die casting are expensive to manufacture, the process is typically used for high-volume production. Unlike lost wax casting, die casting is a simple process consisting of four main steps. The process is particularly well suited for small- to medium-size parts and produces good surface finish and dimensional stability. Since magnesium cannot be used in hot-chamber die cast machines, it is die cast using a cold chamber method in which metal is melted in a separate chamber before injection. 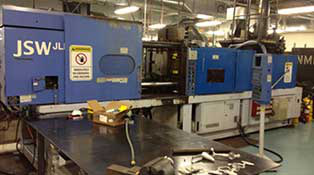 Thixomolding
Thixomolding is a rising star in magnesium fabrication. Once reserved for small and thin parts, it's now being used for a range of shapes and sizes in many different applications and industries. The process relies on the thixotropic nature of certain magnesium alloys: at a specific temperature, the mixture becomes gel-like and exhibits "shear thinning," or reduced viscosity when agitated. In that state, it can be injection molded in a process similar to plastic injection molding.

The process uses specialized equipment for high-speed injection and uses inert gas to keep the heated magnesium from oxidizing. It can accurately produce complex geometries. It can also produce thinner walls and less porous parts than die casting, and in some cases, allows the molding of features that would require secondary operations for die cast parts. 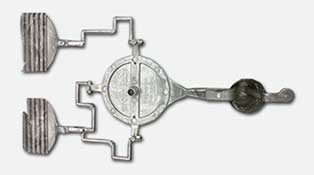 Magnesium thixomolding is just one variant of semi-solid metal casting, the others being thixocasting, rheocasting, and strain induced melt activated (SIMA). A thixomolding machine for magnesium looks much like an injection-molding machine, with a similar clamp for the tool and a screw-based injection barrel. The primary differences are: 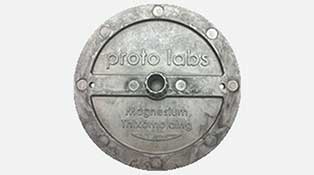 Thixomolding can generally produce a net-shape magnesium part that is quite complex, has minimal porosity, and very thin walls. The process is safer and more environmentally friendly than magnesium casting processes.

Prototyping
As in all development, prototyping helps ensure that magnesium parts will perform as expected. The availability of fast, affordable methods for low-volume prototyping helps ensure that designs will be "bug-free" by the time they are ready for production and helps shorten the entire development process. Different methods for producing magnesium parts may be used as development progresses. Firstcut, Proto Labs' CNC machining service, can cost-effectively produce machined magnesium parts directly from a 3D CAD model in quantities as small as one piece. For larger quantities, Proto Labs can produce fully dense magnesium parts by thixomolding, again working directly from a CAD model.

Oxidation and corrosion
The biggest obstacle to magnesium's wider adoption may be its afore-mentioned sociability. Most of us have seen, probably in a high school science class in our teens, how energetically a magnesium ribbon burns. The same is usually not true of final parts made of the material. Magnesium is highly heat-conductive, making sustained combustion nearly impossible in bulk magnesium.

While the sociability of magnesium is almost never a safety issue for the end user, it poses problems for machining or casting. During the manufacturing process, the chips and powder (swarf) formed when magnesium is machined are at least as eager to oxidize as that science-class ribbon. To add to the problem, once manufacturing swarf is ignited, it's hard to extinguish, combining with nitrogen if oxygen is unavailable. Once ignited, molten magnesium or magnesium swarf actually burns more furiously in the presence of water, which it breaks down to form free hydrogen. Burning magnesium can only be extinguished with Class D extinguishers (most other types of extinguishers will actually accelerate combustion). Clearly, however, since tons of magnesium is being cast, molded, and machined each year, these obstacles can be overcome, but fabricators know that you cannot simply replace resin, steel, or aluminum with magnesium and start cranking out parts.

Safe fabrication
In machine shops, mills used for machining magnesium incorporate dedicated safety equipment. Operators handle waste carefully to prevent accumulation and exposure to ignition sources. They keep appropriate fire control equipment handy, and molding processes use inert cover gases to prevent heated magnesium from igniting. With these precautions in place, magnesium is no more dangerous than hundreds of other materials we use safely every day. And once parts are finished, magnesium's superior conductivity makes it difficult to bring the material to its auto-ignition point even if you try. Magnesium parts can be shipped via common carrier with no special precautions, and the fact that magnesium is being used in engine blocks is an indication of just how stable it can be.

Another issue in using magnesium is also related to its quick oxidization. Depending on the conditions of use and if alloys are not carefully chosen, the material may corrode. One avoidable problem is the presence of iron, copper, and nickel in a magnesium alloy. Too much of any of these can activate corrosion. For that reason, they are kept to very low levels in high-purity magnesium alloys like AZ91D, the most widely used alloy of the metal. A variety of finishes can be applied to magnesium parts both to prevent oxidation and to enhance cosmetic appearance. These include ecoat, powder coat, paint, anodizing, tagnite, and several plated finishes.

Learn more about the basics of the thixomolding process for magnesium parts from Proto Labs here.

Proto Labs also has a special thixomolding Design Guide section that you can access here.