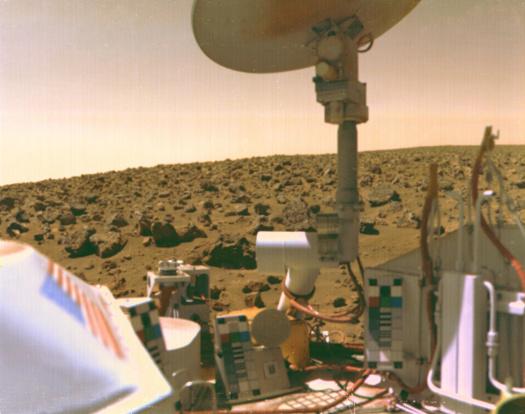 The surface of Mars as seen from the Viking 2 lander, which landed on Mars in September 1976 -- immediately following the first successful spacecraft landing on Mars by Viking 1. Viking 2 operated on the surface for 1,281 Mars days until its batteries ran out on April 11, 1980.[Credits: NASA]

NASA has planted landers and rovers on Mars a handful of times in recent decades, and a future crewed mission to the Red Planet is in sight.

Much of the fundamental science that has enabled those missions (and that will help us send humans to the fourth planet from the sun, too) has its roots in a program known as Viking.

July 20, 2015, marked 39 years since the Viking 1 lander first settled onto the rocky Martian surface and started collecting data. A few weeks later, Viking 2 did the same.

John Newcomb, who served on the Viking management team, discussed the project's evolution and contributions to the NASA and aerospace community. 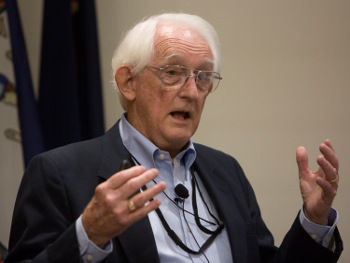 John Newcomb, part of the Viking management team, discussed the project's evolution and contributions to the NASA and aerospace community during a recent Viking seminar. [Credits: NASA/David C. Bowman]

All five of the "Old Vikings," as they're sometimes called, offered fascinating insight into what it was like to land a machine on Mars in the 1970s. Here are a few of the interesting things they shared:

The original landing date for Viking 1 was supposed to be on the nation's bicentennial, July 4, 1976. "We put that out to all the press -- everything," said Newcomb. "Then, of course, we didn't do it." The original landing site appeared too rough. As the team gave itself more time to find a suitable landing site, pressure mounted for NASA to reveal a new date. During a particularly prickly press conference, a reporter "came on aggressive" to Tom Young, Viking mission director, wanting to know what the new landing date would be. The team still hadn't decided. Newcomb remembers Jim Martin, Viking project manager, cutting in. "I'll take this question," he said. "We will land when I consider it safe to land -- and not one minute before."

The first photo taken on Mars captured just a few feet of the Martian surface and part of one of the lander's footpads. There was good reason for that. According to Newcomb, one of the questions people have most frequently asked over the years is, "You could have taken a picture of this beautiful landscape, but you took a picture of a footpad?" The rationale was purely scientific. "We wanted to understand what the bearing strength of that surface was," Newcomb said. "We wanted to understand how the surface would respond to the footpad."

The Viking program generated some impressive technologies. Among many other firsts, the Viking 1 lander was the first spacecraft to be completely sterilized. Part of that sterilization process involved folding the lander into a hermetically sealed cocoon then putting it in an oven and cooking it at 120 degrees for 40 hours. "We're dealing with 1960s technology here," Newcomb said. "Take your phone and throw it in the oven and do that -- then try to make a phone call. I dare you."

Even with all the impressive technological breakthroughs, science was always at the root of the Viking program. "We were science driven," Guastaferro said, "rather than aeronautics, rather than space, rather than technology." From 1968 to 1976, a group of more than 70 scientists from universities around the country helped define the Viking program, and had a say in every critical aspect of it, from engineering, to design, to operation. "We never lost sight of what our customer was," Guastaferro said. "Our customer was knowledge and science." 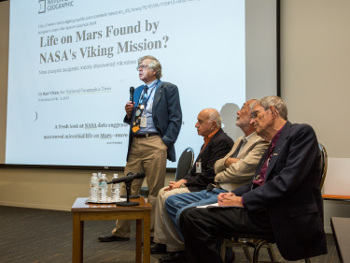 Both landers had unexpectedly rocky welcomes to the Red Planet -- literally. Using the best available data and images, the Viking team looked for a smooth place to set down the first lander. After the initial site turned out to be a no-go, the team finally found a spot that looked relatively rock free. It wasn't. For Viking 2, the team chose a spot where a geologist predicted the rocks would be buried beneath 25 ft of sand. That also turned out to be untrue. But the rocky terrain didn't hinder the mission. "You had to be able to react to the reality of what you got," Crabill said, "and we did."

The Viking program gave us some awesome technologies, but also relied on technologies that seem pretty antiquated today. Siemers ran through a list of technologies that didn't exist when he was figuring out how to send the Viking landers racing through the Martian atmosphere down to the surface -- smartphones, desktop computers, computational fluid dynamics, conference calls, PowerPoint.

"What we did have -- and this is kind of tongue in cheek -- was a central computing system," Siemers said. "It was a building up the road here in which after you wrote your program and punched all your little cards and put them in a box and carried them to the central computing system, you put them in the queue. Then you go back to your office, and they'd call you when your run was over. And that might take an hour, a day, a week -- you never knew."

Did Viking discover life on Mars? No. Yes. Maybe? According to Levine, the picture is still unclear -- but maybe yes? Both Viking landers conducted three biological experiments, and on both landers one of those experiments, the Labeled Release experiment, or LR, gave what appeared to be positive results. Gilbert Levin, the principal investigator for LR, believes the experiment did, in fact, reveal metabolic activity in the Martian soil.

That's long been a minority belief.

The general consensus in the scientific community has been that the results showed a false positive.