Engineer's Toolbox:
A nanoscale look at why a new alloy is amazingly tough -- especially when cold

Just in time for the icy grip of winter: A team of researchers led by scientists from the U.S. Department of Energy Lawrence Berkeley National Laboratory (Berkeley Lab) has identified several mechanisms that make a new, cold-loving material one of the toughest metallic alloys ever. 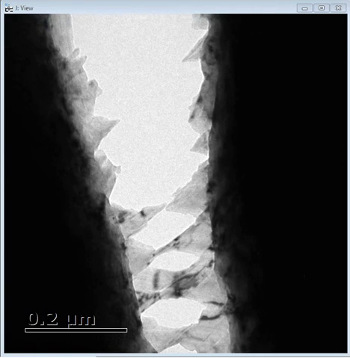 The alloy is made of chromium, manganese, iron, cobalt, and nickel, so scientists call it CrMnFeCoNi. It's exceptionally tough and strong at room temperature, which translates into excellent ductility, tensile strength, and resistance to fracture. And unlike most materials, the alloy becomes tougher and stronger the colder it gets, making it an intriguing possibility for use in cryogenic applications such as storage tanks for liquefied natural gas.

To learn its secrets, the Berkeley Lab-led team studied the alloy with transmission electron microscopy as it was subjected to strain. The images revealed several nanoscale mechanisms that activate in the alloy, one after another, which together resist the spread of damage. Among the mechanisms are bridges that form across cracks to inhibit their propagation. Such crack bridging is a common toughening mechanism in composites and ceramics but not often seen in unreinforced metals.

Their findings could guide future research aimed at designing metallic materials with unmatched damage tolerance. The research appears in the Dec. 9, 2015, issue of the journal Nature Communications.

Video: One secret of the new alloy's amazing toughness is seen in this transmission electron microscopy movie that shows the formation of nano-size bridges across a growing crack. These bridges inhibit the crack's growth and are one of several mechanisms identified by the scientists that give the alloy incredible toughness and strength. [Credit: Berkeley Lab]

"We analyzed the alloy in earlier work and found spectacular properties: high toughness and strength, which are usually mutually exclusive in a material," says Robert Ritchie, a scientist with Berkeley Lab's Materials Sciences Division who led the research with Qian Yu of China's Zhejiang University and several other scientists.

"So in this research, we used TEM to study the alloy at the nanoscale to see what's going on," says Ritchie.

In materials science, toughness is a material's resistance to fracture, while strength is a material's resistance to deformation. It's very rare for a material to be both highly tough and strong, but CrMnFeCoNi isn't a run-of-the-mill alloy. It's a star member of a new class of alloys developed about a decade ago that contains five or more elements in roughly equal amounts. In contrast, most conventional alloys have one dominant element. These new multi-component alloys are called high-entropy alloys because they consist primarily of a simple solid solution phase, and therefore have a high entropy of mixing.

They're a hot topic in materials research and have only recently been available in a quality suitable for study. In 2014, Ritchie and colleagues found that at very cold temperatures, when CrMnFeCoNi deforms, a phenomenon called "twinning" occurs, in which adjacent crystalline regions form mirror arrangements of one another. Twinning likely plays a part in the alloy's incredible toughness and strength. But twinning isn't extensively found in the alloy at room temperature (except in the crack bridges), yet the alloy's toughness and strength are still almost off the charts.*

"If we don't see twinning at room temperature, then what other mechanisms give the alloy these amazing properties?" asks Ritchie.

To find out, the scientists subjected the alloy to several straining experiments at room temperature, and used transmission electron microscopy to observe what happens.

The images also captured the nanoscale version of chewing a mouthful of toffee and having your teeth stick together: In some cases, tiny bridges deformed by twinning are generated across a crack, which help prevent the crack from growing wider.

"These bridges are common in reinforced ceramics and composites," says Ritchie. "Our research found that all of these nanoscale mechanisms work together to give the alloy its toughness and strength."

The research was funded in part by the Department of Energy's Office of Science.

* From the Nature Communications article referenced above: "CrMnFeCoNi, which forms a face-centered cubic (fcc) solid solution, has been found to display excellent damage tolerance with tensile strengths of ~1?GPa, ductilities of ~60-70%, and fracture toughness values exceeding 200?MPa√m, properties that are comparable to the very best cryogenic steels, specifically austenitic stainless steels and high-Ni steels."