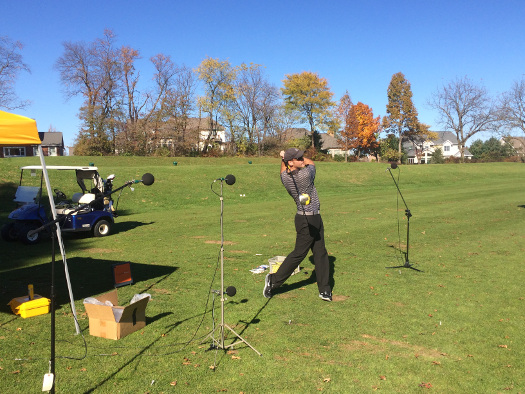 In 2007, a new type of golf club hit the market. The distribution of mass in the club head of the Nike SUMO 2 made it less likely to twist, making an off-center hit less likely to send the ball veering off course.

It was the second iteration of the SUMO (SUper MOment of inertia), explained Daniel Russell, a professor of acoustics at The Pennsylvania State University. This maximized the USGA-allowed dimensions to move the club weight to the outer edges, increasing the moment-of-inertia and making the club more forgiving for off-center hits so that balls tended to be hit straighter.

It did have one drawback: a loud noise when it struck the ball, piercing through the tranquility of a golf course. The club never grew popular among players, with many saying they disliked the noise.

"Some players compared the sound to a cookie tray hitting the top of a car," said Russell. "It was such a different -- some say annoyingly loud -- sound, it raised eyebrows."

Russell and his graduate student Peter Kerrian set out to find the cause of the offensive clang. They had analyzed a variety of clubs from recent years and the "noisy club" stood out as a particularly interesting test case.

The researchers tracked the clanging sound to vibrations in the bottom of the club head, called the sole, that were strongest in the most sensitive range of human hearing.

The researchers presented their results* at the 171st meeting of the Acoustical Society of America, held May 23-27 in Salt Lake City.

Russell has long studied the acoustics of sports equipment, including baseball bats, tennis rackets, and hockey sticks. He says sound is one of the major considerations for players in selecting equipment. "They want to hear the sound and be able to get a sense of the quality of the hit," he said.

In the case of the new driver, the sound not only didn't match expectations, it annoyed people.

"The sound had peaks in the 2- to 3-kilohertz range. The human ear is very sensitive to this range," Kerrian said. He compared the sound to the tin-can ping of an aluminum baseball bat, another grating sound for sports aficionados.

To get at the source of the golf club's clang, the researchers tested it in their lab and measured its vibrations. They also asked members of the Penn State golf team to hit some balls with the club, and recorded the sounds. 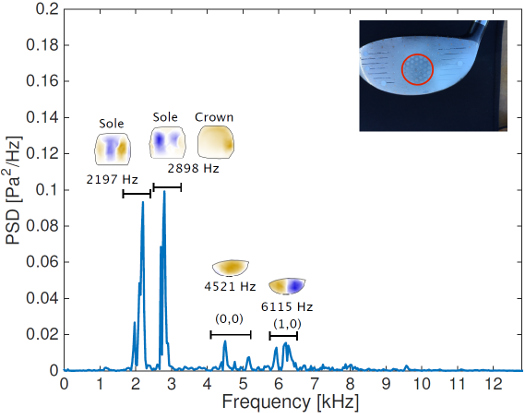 Noise spectrum for a ball impact dead center on the face of the "noisy" club. The frequency spectrum from the recorded impact sound shows two very strong peaks at approximately 2,000 Hz and 3,000 Hz, which correspond to vibration mode shapes of the sole and crown of the club. These peaks completely dominate the sound of the impact, they fall within the range of frequencies where humans hearing is most responsive, and they have 10 times the amplitude of the largest frequency peak in the spectrum for a similar impact from a "normal" sounding club. [CREDIT: Dan Russell/ The Pennsylvania State University]

The scientists matched the vibrational modes of the club to the recorded sounds. They found that the annoyingly loud component could be matched to a natural vibration of the bottom part of the club head. The large size of the club head compared to traditional drivers meant it radiated the 2- to 3-kHz range very effectively, Russell said.

The researchers say the club could likely be redesigned to muffle the sound without sacrificing its forgiveness of off-center hits if acoustical analysis plays a role in the design. This might be done by integrating different materials that absorb the peak frequencies. They are starting collaborations with golf club manufacturers and say acoustical analysis could serve an important role in future equipment development.

The club had a titanium (or titanium alloy) crown and sole in addition to the titanium face, Russell said.

"Some of the newest clubs, which are made of lightweight composite materials, have the opposite problem in that they're almost too quiet," he added

The SUMO2 was one of several clubs that Russell's team tested (including several brand new and future designs) as part of a larger study to better understand what parts of the driver vibrate and produce the impact sound.

Ultimately, the tools of acoustical science could help designers find the sweet spot that merges top-notch performance with solid sound, and no annoying, cookie-sheet clangs.