A look at the sensor solutions that are critical for drones

In today's fast-growing drone market segment, sensor technologies are often the unheralded secret sauce inside. In this article, we discuss the current state of drones and the sensor technology that empowers them.

Industrial drones are a substantial growth industry. The market research firm Tractica estimates that annual worldwide shipments of commercial drones will increase from the current 80,000 units to approximately 2.7 million units in 2025. Services enabled by these drones could generate annual revenue of $8.2 billion. 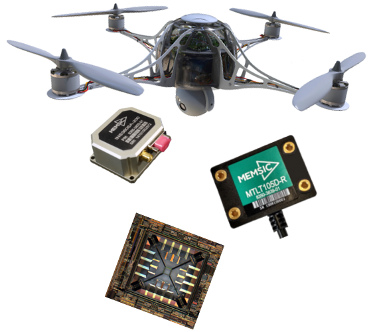 In the past, innovations in drone technology extensively focused on military applications. However, recently the trend has instead started to focus on the commercial market. Here are some important industry verticals where growth is expected:

Cargo transport and delivery
Drones can be used to transport medicines and smaller utility items to and from areas that are remote or not readily accessible by conventional means. They can also play a role in delivering supplies to disaster-stricken areas such as those that have experienced earthquakes, floods, and disease outbreaks. For commercial transport, Amazon and Google also announced in 2013 that they are planning to use drones as part of their delivery service to bring orders to their customers within a couple of hours. One critical hurdle is FAA flight rules. Although drones are currently limited to line of site from the operator, further modification of FAA rules may allow beyond visual range deliveries to commence. The FAA currently has a committee of 27 companies and trade associations investigating and recommending flight rules for commercial drones based on drone size and flight paths over people. We expect continued focus on defining tests and flight rules, with the ultimate goal of allowing autonomous drones to become a part of everyday commerce.

Monitoring and surveying
Surveying and monitoring are also a substantial growth sector. Some examples include geomagnetic surveying, which can be used to predict the location of mineral deposits, gas and oil pipeline monitoring, disaster-area inspection, and wildfire detection and prevention. Other uses include investigation and data collection such as archaeology. Archaeologists can use drone technology to create three-dimensional models of sites, which can save months of time for the researchers.

Conservation and animal rights
Conservation groups and animal rights organizations are using drones to good effect in their efforts to curb abuse. For example, The World Wildlife Fund for Nature (WWF) started to use drones in 2012 to help aid conservation efforts in Nepal. They were used to monitor the populations of rhinos, tigers, elephants, and deer. The WWF has also worked with the Namibian government, using drones to help reduce rhino poaching. Anti-whaling activists such as Sea Shepherd have used drones to monitor Japanese whaling ships.

Law enforcement
For the last several years, police in many countries have used drones to monitor suspects and public places. Drones may be equipped with non-lethal tools such as Tasers to identify criminals and facilitate arrest. An example of this is being tested in North Dakota, with Taser-armed drones known as Predators. Other drones are equipped with sensors to identify chemical, biological, radiological, and/or nuclear materials.

Commercial filmmaking
The media and filmmakers make use of drones to capture images and video that would otherwise be taken by a helicopter or expensive crane gear. Drones reduce costs dramatically and can also improve the process by being more agile and maneuverable, offering the director more flexibility to get the right shot. Drones are also used to capture sporting events to get a dynamic, close-up look at the athletes or game in progress. These drones capture the excitement of a moving image that precedes or follows a fast-moving athlete. Accelerometer sensors work with the guidance system of the drone to make that possible.

An example of a commercially available drone for filmmaking is DJI's Phantom 3, which is extensively used for filmmaking, and with a price range of only $799 to $999 (depending on configuration), it is one of the lower cost drones available in the market. At the end of 2014, GoPro even announced that it will be investing in a drone that uses its camera for video recording. Excitement is mounting now, because the GoPro Karma drone release is anticipated by the end this year.

Agriculture
Drone use in agriculture has increased substantially over the last several years. Farmers use drones to monitor and improve crop health and irrigation, livestock location, and grazing patterns. Given issues such as dealing with severe drought, drones will become increasingly important as a useful tool for the agriculture industry. According to a Bank of America Merrill Lynch global research report, the agricultural drone market has the potential to generate more than 100,000 jobs in the United States and $82 billion in economic activity between 2015 and 2025.

Healthcare
The use of drones in healthcare is also gaining attention. Small drones can be used inside medical facilities to efficiently and autonomously carry and deliver medicine to the bedside of a patient. They can also be used to deliver critical items such as blood for analysis and medical supplies.

Ambulance drones are also being tested. These drones can be used to deliver automatic external defibrillators, increasing the survival rates with cases of cardiac arrests. Prototypes have been conceived and developed by TU Delft University in the Netherlands.

The technology that makes drones work

Given the current growth trends for drones, what are the underlying sensor technologies that make them work? 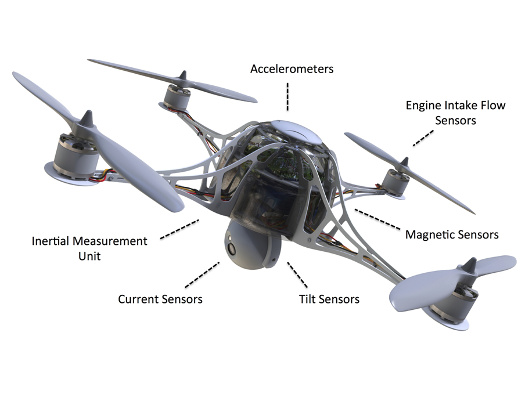 Accelerometers
Accelerometers are used to determine position and orientation of the drone in flight. Like your Nintendo Wii controller or your iPhone screen position, these small silicon-based sensors play a key role in maintaining flight control. MEMS accelerometers sense movement in several ways. One type of technology senses the micro movement of very small structures embedded in a small integrated circuit. The movement of these small "diving boards" changes the amounts of electrical current moving through the structure, indicating change of position relative to gravity.

Another technology used in accelerometers is thermal sensing, which offers several distinct advantages. It does not have moving parts, but instead senses changes in the movement of gas molecules passing over a small integrated circuit. Because of the sensitivity of these sensors, they play a role in stabilizing on-board cameras, which are vital for applications like filmmaking. By controlling up and down movement, as well as removing jitter and vibration, filmmakers are able to capture extremely smooth-looking video. Additionally, because these sensors are more immune to vibrations than other technologies, thermal MEMS sensors are perfect in drone applications to minimize problems from the increased vibration generated by the movement of rotating propulsion fans/propellers. 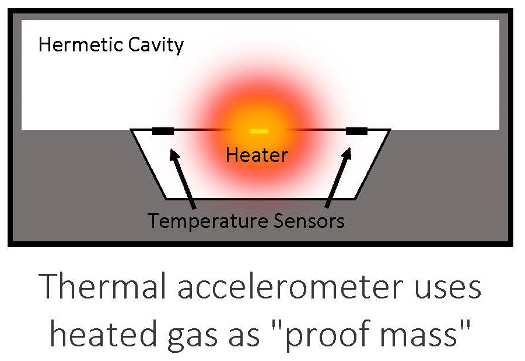 Tilt sensors
Tilt sensors, combined with gyros and accelerometers, provide input to the flight control system in order to maintain level flight. This is extremely important for applications where stability is paramount, from surveillance to delivery of fragile goods. These types of sensors combine accelerometers with gyroscopes, allowing the detection of small variations of movement. It is the gyroscope compensation that allows these tilt sensors to be used in moving applications like motor vehicles or drones.

Current sensors
In drones, power consumption and use are important, particularly those that are battery powered. Current sensors can be used to monitor and optimize power drain, oversee safe charging of internal batteries, and detect fault conditions with motors or other areas of the system. Current sensors work by measuring electrical current (bi-directional) and ideally provide electrical isolation to reduce power loss and eliminate opportunity for electrical shock or damage to the user or systems. Sensors with fast response time and high accuracy optimize the battery life and performance of drones.

MEMSIC's technology suite for complex systems
MEMSIC's MEMS technology is unique, in that it combines rugged silicon wafer fabrication with integrated circuit technology, all on one chip. This increases the robustness of the sensors and systems while providing maximum tolerance to high g forces and vibration. MEMSIC's portfolio of accelerometers are used in a wide variety of applications, and in addition to drones, play a critical role, for example, in automotive safety systems such as stability control and rollover detection. MEMSIC's accelerometers are thermal sensors as described above. Because there are no moving parts, just moving molecules, the robustness is unmatched. 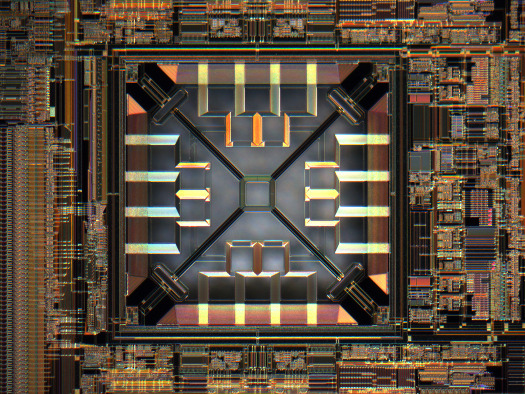 The thermal MEMS accelerometer is based on the principle of convection of heated gas molecules within a sealed cavity. Highly accurate temperature sensors can detect the change in temperature profile resulting from very small changes in acceleration (or inclination).

The same basic technology used so effectively in measuring acceleration can also be used to measure gas flow. MEMSIC's mass gas flow and differential pressure sensors are small in size, and offer class-leading power consumption and dynamic range. They are perfect for mobile applications such as the gas-powered drone pictured above and new classes of therapeutic medical devices.

MEMSIC's series of inertial navigation units (IMUs) are used in hundreds of types of aircraft. These FAA-rated units play an increasingly important role in guidance for new types of aircraft and systems where directional accuracy is a must, from agricultural drones to autonomous vehicles. MEMSIC's IMU380 product line is small, rugged, and designed for applications like personal aircraft, drones, and farm equipment. 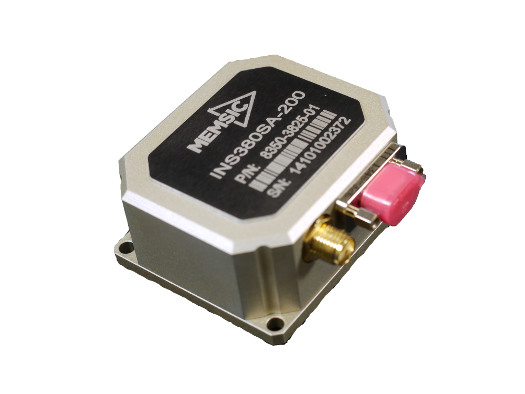 The INS380SA is a complete inertial navigation system with a built-in 48-channel GPS receiver. The SmartSensing technology enables a turnkey system with better than 0.01-m/s velocity measurement accuracy. The integrated 3-axis magnetometer allows for accurate operation when the GPS signal is lost or when the vehicle comes to a stop.

Tilt sensors with gyro compensation are essential to keeping industrial and construction machinery level. These highly accurate sensors play a role in safety-critical applications. They are also used in consumer products like riding lawn mowers and motorcycles. 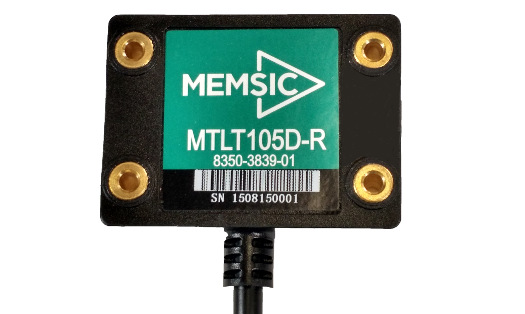 Sensors are more essential to complex products than ever. In today's critical environments, safety and security of successful operations rely on critical input that is derived from highly accurate and reliable sensing technologies.

Acknowledgements
We would like to thank Northeastern University graduate students Gayatri Kakarla, Rithvik Narayanan, Rachel Parkin, and Ke Xuan, and Associate Professor Tucker Marion, for their participation in gathering market research for this article.

"How drones will drastically transform U.S. agriculture, in one chart"
"Ambulance Drone"