Traditional round ram design (pictured above) consists of all-metal components. As the square ram design has evolved, one of the key improvements has been the replacement of metal cam followers with plastic cam followers. This design improvement produced significant cost benefits by protecting cams from wear and eliminating the need for lubrication.

Can-making equipment is nothing if not specialized, yet the subsystems found on these machines offer a number of design lessons that can be applied more broadly by any engineer working to improve the performance and reliability of high-speed equipment.

Consider, for example, the cam-driven ram actuators found on a can-line's necking stations. Mounted on a rotating turret and moving at speeds up to 250 strokes per minute, these rams push the round can shell onto a series of shaping dies that gradually reduce the diameter of the can to form its neck.

Traditionally, these rams have consisted of a round moving pin that translates axially within a barrel-like steel housing, with a machined keyway to keep the pin from rotating. The ram was driven directly via a pair of metal cam followers that mount on the rear end of the pin and engage a stationary cam.

Having solved other lubrication issues on the necker, engineers and designers at Intech were asked to examine the possibility of eliminating ram lubrication. Upon further examination, they learned that the traditional ram design suffers from three problems in the field. For one, it requires an aggressive lubrication regimen to function properly and to counter the ram and cam wear. For another, it allows the pin to lift and twist in the barrel, causing premature wear that extends all the way back to the can. And lastly, the traditional design limits the operating speed of the necker.

By focusing on lubrication elimination, Intech addressed all three problems with a new ram design that serves as a drop-in replacement for the traditional ram. Here's how.

Defining the problem: Excess wear and expensive lubrication
One of the chief problems with the traditional design was its propensity to wear out prematurely, despite lubrication. This lifecycle issue came as no surprise given that these machines run around the clock and typically produce between 2,000 and 3,000 cans per minute.

We began our work by analyzing the source of the wear and found that much of it came from an obvious source: metal-on-metal contact between the pin and barrel as well as between the cam followers and drive cams. In the traditional ram design, the absence of a lubricant would lead to failures in a very short period of time.

A less obvious source of wear emerged when we conducted an FEA analysis of the ram. We simulated not only the forces needed to extrude the can neck but also the related centrifugal and acceleration forces. What we found was that the ram was deflecting upward and twisting. This deflection significantly increased the effects of the metal-on-metal wear throughout the ram assembly. In particular, the centrifugal and acceleration forces contributed to the wear on the leading edge of the ram body and on its keyway, resulting in a telltale "pleating defect" on the can neck.

With all the metal-on-metal contact associated with traditional ram designs, on-going lubrication of both the ram itself and its cam followers had been a necessity. In fact, these machines typically have automated lubrication systems, which are costly to install and run.

The solution: Better materials, less weight
The answer to the wear problem involved a change in the ram's materials and pin geometry. By moving to an aluminum ram and square pin, we reduced the ram weight by 60 percent for an equal reduction in centrifugal and pin acceleration forces. The square shape also guides the pin better during the extrusion cycle and distributes forces evenly over a larger area, further diminishing the potential for wear.

Even if we did nothing else, the weight reduction would have extended the wear life of the ram as well as its drive cam and metal cam followers. Yet as long as the ram had any metal-on-metal contact, especially between its cam follower and the drive cam, we could not fully achieve our goal of creating a lubrication-free system. 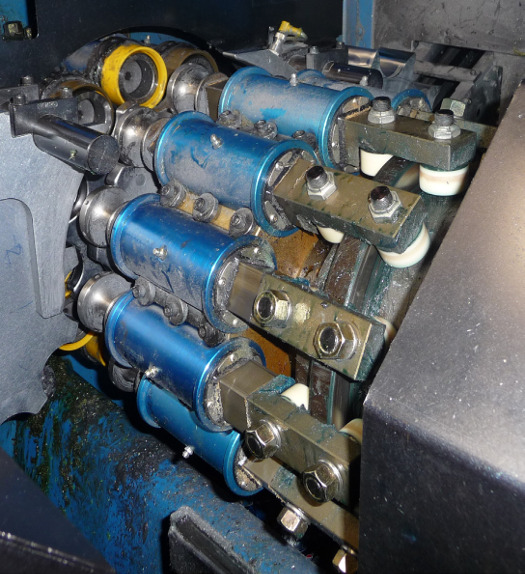 A redesigned square ram with polymer cam followers eliminates 720 lubrication points and nearly 1 metric ton of moving mass from the necker mechanism of the can-making machine.

Selecting the right polymers for both the cam follower and sleeve job turned out to be a crucial part of the design solution. However, it's easier said than done, since most such materials do not have the strength of metals. And it is important to note that data sheets for self-lubricating polymers do not accurately reflect changes in mechanical properties under operating conditions.

We based our materials selection process on a thorough understanding of the forces involved, which we had from our FEA work. We also had to perform additional engineering calculations that allowed us to predict how the self-lubricating materials would behave over time under the actual operating conditions. That's often easier said than done. Fortunately, we have developed proprietary material models over the years that allowed us to make those calculations with high reliability.

The result of the materials and geometry changes has been impressive. Reductions in forces, friction, and wear have at least doubled the life of a typical ram. And the wear-induced pleating defect has dropped from 3 percent to less than 1 percent in high-speed lines.

More important, given our original design intent, the revamped ram completely eliminated the need to lubricate the ram body and its two cam followers -- each of which required its own lubrication port. With a total of 240 rams on a typical 10-stage necker, the improved ram design gets rid of 720 lubrication points from the machine. It also makes the expensive automatic lubrication system unnecessary. 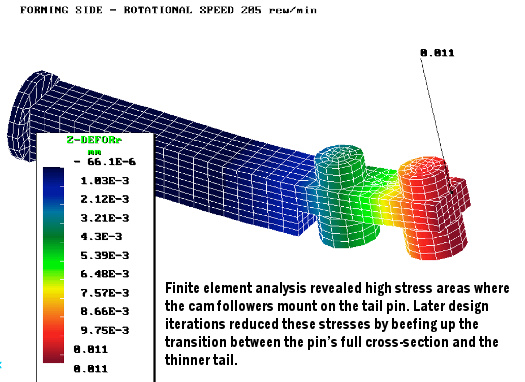 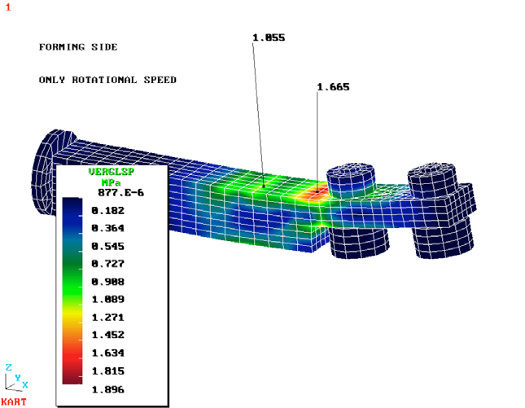 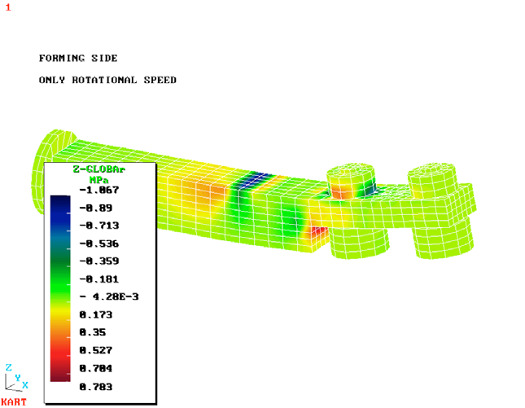 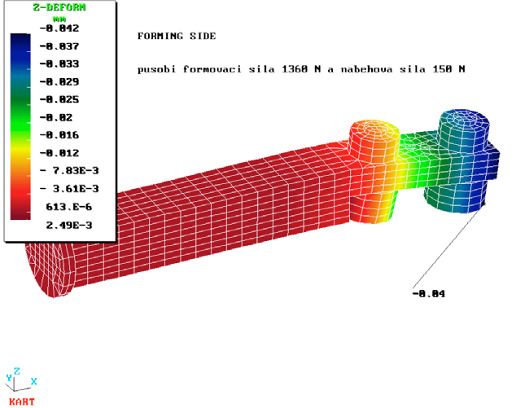 The payoff
With industrial machines, improvements to a seemingly minor component can often have an oversized payback. The square ram design is a case in point:

The total cost reduction associated with the square rams has already resulted in their adoption by can-making operations around the globe.

Design Extra 1: Polymers eliminate cam wear for maximum savings
The square rams could not do their job without a cam to propel them. And in fact, the biggest value of the square ram design is that it extends the ram life and eliminates cam wear completely. Some measure of protection comes from the fact that the lightweight square ram operates at lower forces than traditional round rams. However, an even more important contribution to cam longevity comes from a clever use of materials.

As part of the ram redesign, we replaced metal cam followers with proprietary cam followers made from a self-lubricating polymer. Because the polymer cam followers will not produce wear on the much-harder cam surfaces, the use of polymers completely eliminates the chief wear mechanism behind cam failure. While the cost of replacing a ram is not insignificant, it pales in comparison to the cost of replacing the necker cams. The cams themselves are precision ground and expensive. Then there's the downtime and labor costs to replace the cams.

Taken together, these factors mean that the typical cam change can cost tens of thousands of dollars -- only to be repeated every few years.

Speed. In can making, line speed equals profit, and the traditional round ram design imposed a speed limit on the necking operation. Made from steel with steel cam followers, these rams typically weighed in at 14 lb total, with a pin that weighed 8 lb. Operating these heavy rams at high speeds triggered high centrifugal forces that accelerated wear. So, machine speeds would be dialed down from their design specifications to keep the rams from wearing out prematurely.

To lift that speed limit, we cut the ram weight by more than half to 5.2 lb. The moving mass represented by the pin and cam followers dropped to 3 lb. We achieved this weight reduction by crafting the ram components from aircraft aluminum and polymers, rather than steel. Total weight reduction of rotating mass on a 10-stage line is nearly 1 metric ton.

The move to lightweight material has resulted in significant cycle-time increases. Based on the reports from the plants now using our square ram design, necker cycle times have increased on average by 12 to 15 percent on older machines. On new neckers, the square ram has enabled operation at or near the design speeds.

Energy savings. By cutting nearly 1 metric ton of mass that would otherwise have to be accelerated and decelerated, the square ram has lowered necker energy consumption significantly. In some cases, energy costs have dropped by 25 percent.

Less shock and vibration. The square ram's use of lightweight materials has the added benefit of reducing shock and vibration, which usually represents an important speed constraint in rotating machines. In particular, the polymers used on the ram's cam followers provide a significant amount of mechanical damping -- with the damping properties of the polymers peaking near the operating temperatures of a necker.