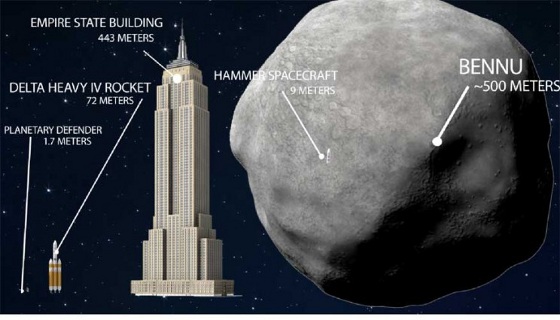 Deflecting the massive asteroid 101955 Bennu was the focus of recent research by a national planetary defense team. Bennu will make a very close approach to Earth on Sept. 25, 2135.

Lawrence Livermore National Laboratory (LLNL) scientists are part of a national planetary defense team that has designed a conceptual spacecraft to deflect Earth-bound asteroids. They have evaluated whether it would be able to nudge a massive asteroid -- which has a remote chance of hitting Earth in 2135 -- off course. The design and case study are outlined in a paper published recently in Acta Astronautica.

The 9-m-tall, 8.8-ton spacecraft -- dubbed HAMMER (Hypervelocity Asteroid Mitigation Mission for Emergency Response vehicle) -- features a modular design that would enable it to serve as either a kinetic impactor, essentially a battering ram, or as a transport vehicle for a nuclear device. Its possible mission: deflect 101955 Bennu, a massive asteroid around 500 m (more than five football fields) in diameter, weighing around 79 billion kg (1,664 times as heavy as the Titanic), circling the sun at around 63,000 mph. Based on observation data available, Bennu has a 1 in 2,700 chance of striking Earth on Sept. 25, 2135, and it is estimated that the kinetic energy of this impact would be equivalent to 1,200 megatons (80,000 times the energy of the Hiroshima bomb). 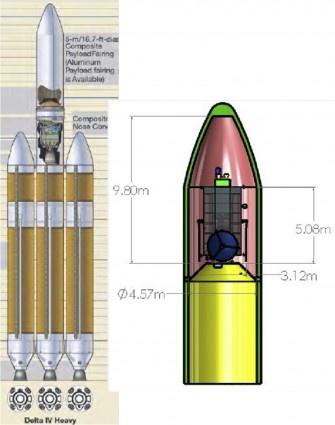 The 8.8-ton conceptual HAMMER spacecraft (right) is designed to fit within the Delta IV Heavy, the world's second highest-capacity launch vehicle in operation, surpassed only by SpaceX's Falcon Heavy rocket.

"The chance of an impact appears slim now, but the consequences would be dire," said Kirsten Howley, LLNL physicist and coauthor on the paper. "This study aims to help us shorten the response timeline when we do see a clear and present danger so we can have more options to deflect it. The ultimate goal is to be ready to protect life on Earth."

The effort is part of a national planetary defense collaboration between the National Aeronautics and Space Administration (NASA) and the National Nuclear Security Administrationl (NNSA), which includes LLNL and Los Alamos National Laboratory (LANL). Of the three prongs of planetary defense, NASA is responsible for the first, detecting asteroids with enough time to mitigate the risk. The LLNL planetary defense team is the technical lead on the second prong, mitigation of the threat. The LLNL team also supports the third prong, emergency response should mitigation fail.

The preferred approach to mitigating an asteroid threat would be to deflect it by ramming a kinetic impactor into it, delivering a gentle nudge large enough and soon enough to slow it down and change its collision course with Earth, but not so large that the object breaks apart. This study helped quantify the threshold where a kinetic impactor would no longer be an effective deflection option. To evaluate this threshold, researchers focused on determining how many HAMMER impactors it would take to deflect Bennu.

"The push you need to give it is very small if you deflect the asteroid 50 years out," Howley said. "But that far out, you're likely to think the percentage of being hit would be 1 percent. The probability of a Bennu impact may be 1 in 2,700 today, but that will almost certainly change -- for better or worse -- as we gather more data about its orbit. Delay is the greatest enemy of any asteroid deflection mission. That's why there's urgency in getting viable deflection platforms on the shelf today."

If the decision was made to embark on a mission to deflect Bennu, researchers estimate that it would take a minimum of 7.4 years before an impulse could be delivered to the Earth-bound object. This includes the time it would take to build the spacecraft, plan the mission, and travel to the object. Assuming the impactor successfully hits the asteroid, slowing it down slightly, it would take many years for the small change in speed to accumulate into a sufficient change in trajectory.

The researchers evaluated a number of deflection scenarios in this study, ranging from launching 10 years before impact to 25 years before. In the 10-year scenarios, it was determined that it could take between 34 and 53 launches of the Delta IV Heavy rocket, each carrying a single HAMMER impactor, to make a Bennu-class asteroid miss the Earth. If there were a 25-year lead time, that number could be reduced to seven to 11 launches. The exact number would depend on the desired Earth-miss-distance and the impact conditions at the asteroid.

"When many launches are required for a successful deflection, the mission success becomes more difficult, due to the failure rate associated with each individual launch," said Megan Bruck Syal, LLNL physicist and coauthor on the paper. "If we only had 10 years from launch, we would need to hit Bennu with hundreds of tons of HAMMER mass just to barely deflect it off of an Earth-impacting path, requiring dozens of successful launches and impact at the asteroid."

Just how large an asteroid could a single impactor deflect? Researchers determined that a single HAMMER impactor could deflect an object 90 m in diameter by around 1.4 Earth radii with 10 years of lead time -- from the time of launch to anticipated Earth impact. If they needed less of a deflection, around a quarter of an Earth radii, a single impactor could be effective on an object as large as 152 m in diameter in this same scenario. 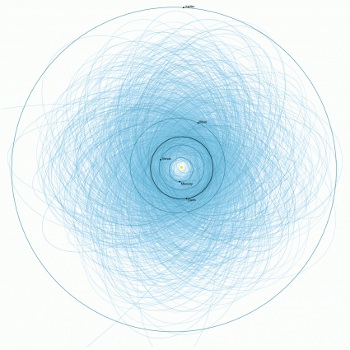 This 2013 plot by NASA JPL shows the orbits of potentially hazardous (more than 140 m in diameter) near-Earth objects that pass within 4.7 million miles of Earth's orbit. Earth's orbit is represented by the darker black circle. Jupiter is the outer-most circle. The sun is in the center.

The paper concluded that using a single HAMMER spacecraft as a battering ram would prove inadequate for deflecting an object like Bennu. While recent simulations of nuclear deflection scenarios are not included in this paper (they will be included in a companion paper to be submitted for publication in the near future), the findings suggest that the nuclear option may be required with larger objects like Bennu. The nuclear approach carries the potential to deposit much more energy into an object like Bennu, causing a greater change in speed and trajectory.

Unlike popular portrayals of a nuclear deflection mission -- like the movie "Armageddon" -- the nuclear deflection approach would consist of detonating a nuclear explosive some distance from the asteroid. This would flood one side of the asteroid with X-rays, vaporizing a layer of the surface, which would create rocket-like propulsion as vaporized material is ejected from the object. Unlike a kinetic impactor, the amount of energy deposited into an asteroid with a nuclear device could be tuned by adjusting how far it is from the asteroid when detonated.

Because Bennu regularly passes close enough to Earth for radar observations, researchers are able to estimate its orbit with enough accuracy to give a few decades of warning, if it's bound to impact the Earth. This near-Earth Bennu fly-by happens every six years. But for other objects that do not regularly pass close enough to Earth for radar observations, much more uncertainty exists. If limited to telescopic observations, it's possible that researchers may not be 100 percent certain of an impact until less than a year before collision. In a scenario where there is too little time to mount an effective deflection mission, the last option may be robust disruption via nuclear explosive, though the window of opportunity would be very tight. A robust disruption scenario would envision breaking the asteroid into a number of smaller pieces.

"Successful disruption requires ensuring that the asteroid pieces are sufficiently small and well-dispersed, so that they pose a much-reduced threat to the Earth," Syal said. "Disruption carried out as late as tens of days before impact can still be very effective in reducing the total damage felt by Earth. Previous work by our research group has shown that the impacting debris is reduced to less than 1 percent of its initial mass by disrupting the asteroid, even at these late times."

Bennu is one of more than 10,000 near-Earth objects found by NASA so far, and scientists estimate that this is just a fraction of the objects that come within about 28 million miles of Earth, close enough to where impact with Earth can't be precluded due to the uncertainty in the object's path. The good news is that most of these objects are much smaller than Bennu. NASA's Center for Near Earth Object Studies lists just more than 2,500 near-Earth objects discovered that are potentially as large as Bennu.

This research is the first of three case studies to be published, each examining different mitigation scenarios. The next case studies will examine deflection of Didymos B, the target of NASA's DART mission, and a scaled-down Comet Churyumov-Gerasimenko, which was visited by the European Space Agency's Rosetta mission in 2014 to 2016.