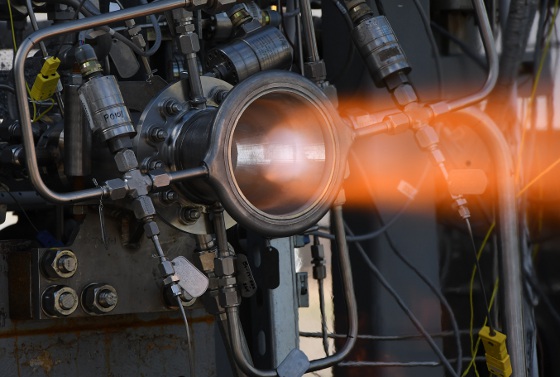 During hot-fire testing at NASA's Marshall Space Flight Center, engineers put this nozzle through its paces, accumulating more than 1,040 seconds at high combustion chamber pressures and temperatures. Now, this technology is being licensed and considered in commercial applications across the industry. [Credits: NASA/MSFC/David Olive]

Rocket engine nozzles operate in extreme temperatures and pressures from the combustion process and are complex and expensive to manufacture. That is why a team of engineers at NASA's Marshall Space Flight Center in Huntsville, AL, developed and proved out a new additive manufacturing technique for nozzle fabrication that can greatly reduce costs and development time.

A new process called Laser Wire Direct Closeout (LWDC) was developed and advanced at NASA to build a less-expensive nozzle in significantly less time. LWDC is a different process than most 3D-printing technologies, which are powder-based and fabricated in layers. It uses a freeform-directed energy wire deposition process to fabricate material in place. This new NASA-patented technology has the potential to reduce build time from several months to several weeks.

"NASA is committed to revitalizing and transforming its already highly advanced manufacturing technologies for rocket engines," said Preston Jones, director of the Engineering Directorate at Marshall. "What makes this development project even more unique is there were three separate, state-of-the-art, advanced manufacturing technologies used together to build a better nozzle and prove it out through hot-fire testing -- an example of why Marshall continues to be a worldwide leader in manufacturing of propulsion technologies."

Nozzles may look simple from the outside, but they are very complex. The new LWDC method employs a wire-based additive manufacturing process to precisely close out the nozzle coolant channels, which contain the high pressure coolant fluid that protects the walls from the high temperatures a nozzle must withstand. 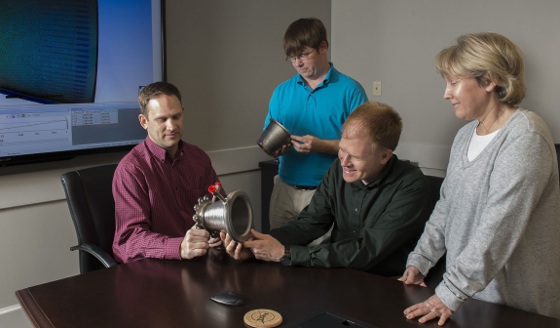 Nozzles are actively cooled, or regeneratively cooled, meaning the propellant later used in the combustion cycle is routed through the nozzle to properly cool the walls so they do not overheat. To regeneratively cool the nozzles, a series of channels are fabricated within the nozzle, but then must be closed out, or sealed, to contain the high-pressure coolant. The new patented process using the LWDC technology closes out the coolant channels and forms a support jacket in place, reacting structural loads during engine operation.

"Our motivation behind this technology was to develop a robust process that eliminates several steps in the traditional manufacturing process," said Paul Gradl, a senior propulsion engineer in Marshall's Engine Components Development & Technology Branch. Gradl has focused his whole career on rocket nozzles and combustion chambers, like this one developed and patented at Marshall. "The manufacturing process is further complicated by the fact that the hot wall of the nozzle is only the thickness of a few sheets of paper and must withstand high temperatures and strains during operation."

After Marshall co-developed and patented the LWDC process, Keystone Synergistic of Port St. Lucie, FL, used the technology to fabricate and test a nozzle. Through hot-fire testing at Marshall, engineers put this nozzle through its paces, accumulating more than 1,040 seconds at high combustion chamber pressures and temperatures. Now, this technology is being licensed and considered in commercial applications across the industry.

The second technology tested as part of this campaign was an abrasive water-jet milling process to form the coolant channels advanced by Ormond, LLC of Auburn, WA, while a further technology developed was an arc-based deposition technology to additively manufacture the near net shape liner that would contain the water-jet milled channels. All three technologies were developed through NASA's Small Business Innovation Research program, working to bring together the agency with its industry partners to advance manufacturing. With projects such as these, Marshall is stimulating small business to maximize the return on America's investment in space technology and exploration.

"One of the things I get excited about is advancing and proving out new technologies for our application with industry partners that a private space company can then use as part of their supply chain," said Gradl. "That was the objective behind some of this -- we formulated the concept, worked with external vendors, and now we're partnering to infuse this new technology throughout industry to improve advanced manufacturing."