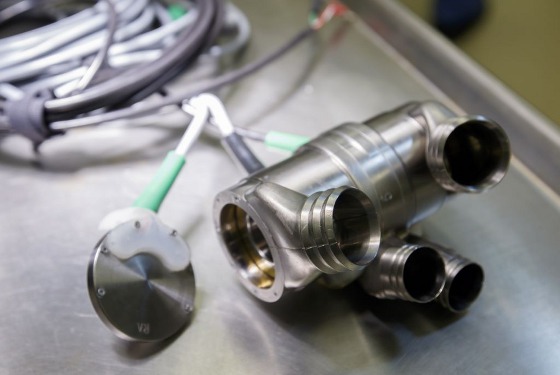 In the new permanent heart design, two ventricles of the human heart are replaced with one titanium tube that houses a hollow rod that shuttles back and forth to create a pulse-like motion. [OHSU/Kristyna Wentz-Graff]

Physicians and researchers at Oregon Health & Science University (OHSU) are developing what they hope will be the first permanent total artificial heart, which could provide some of the approximately 75,000 Americans who die of heart failure every year another chance at life.

The device was originally designed by the now-retired Richard Wampler, M.D., who was inspired to help those experiencing heart disease when he was as a surgical resident at OHSU under Albert Starr, M.D. Starr co-invented and successfully implanted the first world's first artificial heart valve in 1960 and now has emeritus status at OHSU.

Just one artificial heart is currently approved for human use in the U.S., but its manufacturer describes it as a temporary device. Artificial hearts have mostly been viewed as short-term fixes to help ailing patients while they wait for a human heart transplant.

The OHSU device has the potential to be a permanent replacement because of its simple design. It replaces two ventricles -- the human heart's lower chambers -- with one titanium tube that contains a titanium alloy-coated hollow rod that shuttles back and forth. This to-and-fro motion moves blood to the lungs so it can grab oxygen and then sends the resulting oxygen-rich blood throughout the body.

"Considering the human heart beats 14 million times a year, it's crucial that an artificial heart is durable and robust," Kaul said. "The simple, efficient design of our total artificial heart makes its potential for failure very low." 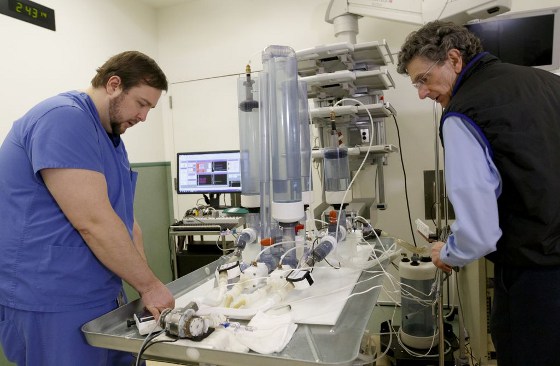 (Left to right) Igor Dykan, M.D. and George Giraud, M.D., Ph.D., test a total artificial heart prototype aimed to be a permanent replacement for those with failing hearts. [OHSU/Kristyna Wentz-Graff]

OHSU's artificial heart will be powered by a combined controller and rechargeable battery pack that users could carry in a pocket, attach to a belt, or place in a backpack. With improved battery efficiency and design, the battery could eventually be implanted under the skin and recharged from the outside.

Keeping it simple
Other artificial heart designs have many complex and moving parts, including two artificial ventricle chambers and various artificial valves. The more parts there are in a machine, the more parts that could break or malfunction, Kaul said. The OHSU device doesn't have valves, and its interior hollow rod is suspended with hydrodynamic bearings, meaning it never touches the tube in which it moves.

OHSU's artificial heart is also unique because it creates a blood flow that mimics a natural human pulse. Other artificial heart pumps send blood through the body in a continuous flow, without a pulse. Having a pulse-like blood flow minimizes blood damage, reduces the risk of blood clotting, and may also reduce some of the complications seen in devices that don't pulse, such as gastrointestinal bleeding and stroke. 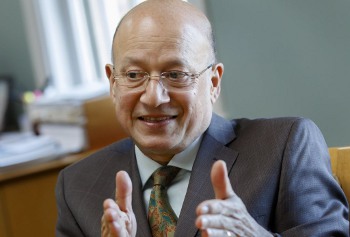 OHSU created a spinoff company named OregonHeart in 2014 that was wholly owned and supported financially by OHSU. The spinoff created two successive versions of the device that it tested in animals at the University of Louisville. The first version was larger and demonstrated the design's proof of principle when it was implanted in cows. The second was small enough to fit in humans and was used for short-term testing in sheep.

OHSU took on the technology's development again in August 2017 after OregonHeart ceased operations. OHSU plans to implant the smaller version of the total artificial heart in sheep for short-term studies to understand its physiology, followed by three-month-long tests. If sheep fare well after being implanted with the device, OHSU plans to request federal permission to run clinical trials using the device in people.

The OHSU total artificial heart's initial development was supported with funds donated by Phil and Penny Knight to establish the OHSU Knight Cardiovascular Institute in 2012.