The U.S. Army is developing technology that visually alerts Soldiers to hidden explosives in the ground rather than just providing them an audible notification during use of mine detector equipment.

Called real-time spatial location tracking, the technology can show sensor images of buried bombs on either a heads-up display or tablet attached to a handheld detector.

As a Soldier sweeps with the device, a colored representation of the area -- where orange means the user is close to a metallic object -- appears on the screen.

The goal is to keep Soldiers safe when clearing routes by being able to better identify potential threats.

"You can immediately see the shape of the object and roughly its size," said Christopher Marshall, a scientist in the Countermine Division of the Night Vision and Electronic Sensors Directorate. "By providing this information to the Soldier, it makes it easier to operate and it means a faster response." 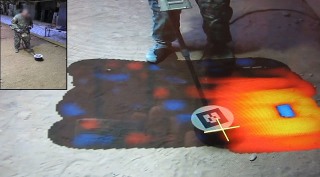 A video still image of real-time spatial location tracking, a piece of technology the Army is developing to visually alert a Soldier to hidden explosives in the ground rather than just a sound while sweeping with a mine detector. NOTE: The visual colored sweep is what the user sees on a screen or in a headset viewfinder. [Photo Credit: Courtesy of CERDEC]

The directorate falls under the Army's Communications-Electronics Research, Development and Engineering Center, which held a media day at Fort Belvoir, VA, at the end of February to highlight its emerging technology.

With the device's position location capabilities, information about where a Soldier has swept, and what was found there, can be easily passed on, in real time, to observers in other locations. Current handheld minesweeping technology requires users to mark potential threats with sticks or other markers.

The system also monitors how a Soldier swings the mine detector as he or she uses it, to ensure they are not fatigued in such a way that it may cause them to miss a hidden object.

"If the Soldier is starting to swing erratically, that could be an early warning sign, so operationally that can help," Marshall said. "Then someone could come up to take the place of the Soldier."

VIDEO: Visual minesweeper: Real-time spatial location tracking visually alerts a Soldier to hidden explosives in the ground rather than just a sound while sweeping with a mine detector.

Other advanced technology to better discriminate between metal objects that the device finds is also being worked on. That way, a Soldier can more quickly differentiate between harmless objects and would-be threats.

With its displays, Sgt. 1st Class Jared Huffstickler, a combat engineer assigned to the Countermine Division, said the technology would help Soldiers be more aware of their surroundings as they clear dangerous routes.

"This is giving us an opportunity to actually see signatures in the ground without taking away our situational awareness on the battlefield," he said.

Since the device tracks sweeping patterns, it could even serve as a training tool for Soldiers like him who are taught to sweep at certain speeds and distances with metal detectors, he added.

Mine detection robots could also be equipped with the technology to capture and send back imagery to Soldiers in a nearby vehicle.

"The idea is that we take these exact same technologies that we're maturing for the handheld dismounted operation and we put it there," Marshall said of the robots. "Now the Soldier isn't even in the picture, and it's much safer."