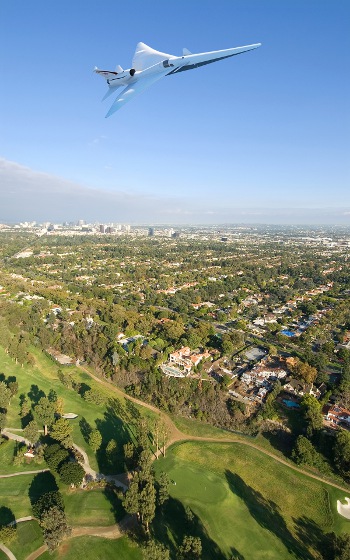 NASA has awarded a contract for the design, building, and testing of a supersonic aircraft to Lockheed Martin Aeronautics Co. [Credits: NASA]

NASA has taken another step toward re-introducing supersonic flight with the award last Tuesday of a contract for the design, building, and testing of a supersonic aircraft that reduces a sonic boom to a gentle thump.

Lockheed Martin Aeronautics Co. of Palmdale, CA, was selected for the Low-Boom Flight Demonstration contract, a cost-plus-incentive-fee contract valued at $247.5 million. Work under the contract began April 2 and runs through Dec. 31, 2021.

Under this contract, Lockheed Martin Skunk Works will complete the design and fabrication of a full-scale experimental aircraft, known as an X-plane, that will cruise at 55,000 ft at a speed of about 940 mph and create a sound about as loud as a car door closing, 75 Perceived Level decibel (PLdB), instead of a sonic boom. The preliminary design was developed under NASA's Quiet Supersonic Technology (QueSST) effort.

Once NASA accepts the aircraft from the contractor in late 2021, the agency will perform additional flight tests to prove the quiet supersonic technology works as designed, aircraft performance is robust, and it's safe to operate in the National Airspace System. 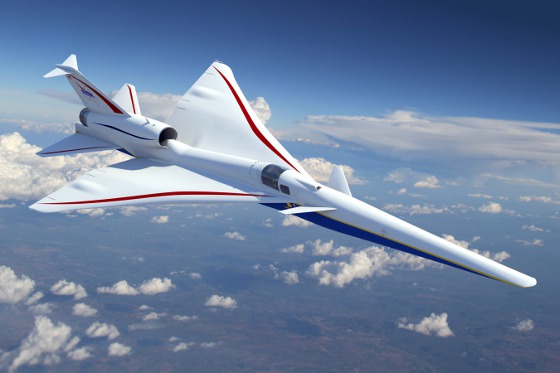 The experimental supersonic aircraft -- known as an X-plane -- aims to reduce a loud sonic boom to a gentle thump. [Credits: NASA]

Beginning in mid-2022, NASA will fly the X-plane over select U.S. cities and collect data about community responses to the flights. This data set will be provided to U.S. and international regulators for their use in considering new sound-based rules regarding supersonic flight over land, which could enable new commercial cargo and passenger markets in faster-than-sound air travel. 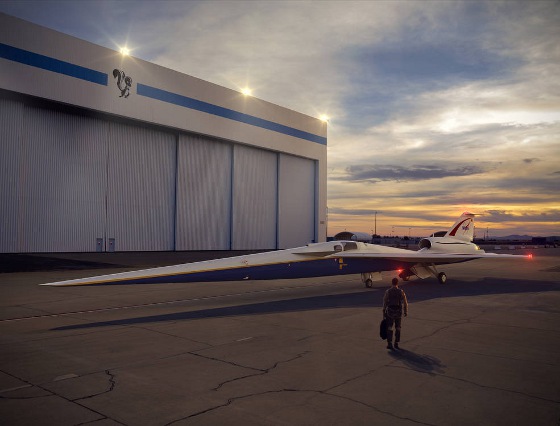 "It is super exciting to be back designing and flying X-planes at this scale," said Jaiwon Shin, NASA's associate administrator for aeronautics. "Our long tradition of solving the technical barriers of supersonic flight to benefit everyone continues."

The key to success for the Low-Boom Flight Demonstrator mission will be to demonstrate the ability to fly supersonic, yet generate sonic booms so quiet that people on the ground will hardly notice them, if they hear them at all.

Current regulations, which are based on aircraft speed, ban supersonic flight over land. With the low-boom flights, NASA intends to gather data on how effective the quiet supersonic technology is in terms of public acceptance.

The complete set of community response data is targeted for delivery in 2025 to the Federal Aviation Administration (FAA) and the International Civil Aviation Organization (ICAO) from which they can develop and adopt new rules based on perceived sound levels to allow commercial supersonic flight over land.

Years of sonic boom research, beginning with the X-1 first breaking the sound barrier in 1947 -- when NASA was the National Advisory Committee for Aeronautics -- paved the way for the Low-Boom Flight Demonstration X-plane's nearly silent treatment of supersonic flight.

The answer to how the X-plane's design makes a quiet sonic boom is in the way its uniquely shaped hull generates supersonic shockwaves. Shockwaves from a conventional aircraft design coalesce as they expand away from the airplane's nose and tail, resulting in two distinct and thunderous sonic booms. 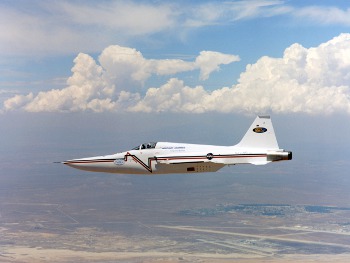 This modified Northrop F-5E jet was used during 2003 for NASA's Shaped Sonic Boom Demonstration program, a successful effort to show that an aircraft's shape can be used to reduce the intensity of the sonic booms it creates while flying supersonic. [Credits: NASA]

But the design's shape sends those shockwaves away from the aircraft in a way that prevents them from coming together in two loud booms. Instead, the much weaker shockwaves reach the ground still separated, which will be heard as a quick series of soft thumps -- if anyone standing outside notices them at all.

It's an idea first theorized during the 1960s and tested by NASA and others during the years since, including flying from 2003-2004 an F-5E Tiger fighter jet modified with a uniquely shaped nose, which proved the boom-reducing theory was sound. 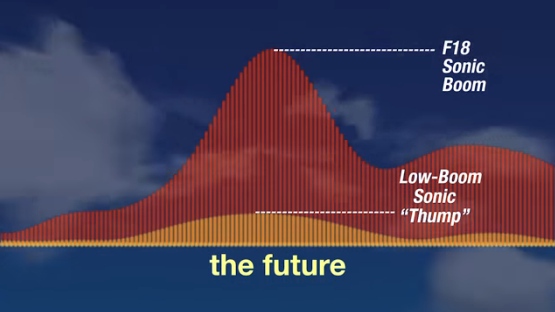 Recent studies have investigated methods to improve the aerodynamic efficiency of supersonic aircraft wings, and sought to better understand sonic boom propagation through the atmosphere.

The swept wing design generally produces crossflow, which is a name for air flow disturbances that run along the span of the wing, resulting in turbulent flow, increased drag, and ultimately higher fuel consumption.

"Swept wings do not have much laminar flow naturally at supersonic speeds, so in order to create a smoother flow over the wing, we put small Distributed Roughness Elements, or DREs, along the leading edge of the wing," says CST Subproject Manager Brett Pauer. "These DREs can create small disturbances that lead to a greater extent of laminar flow."

Swept wing laminar flow technology allows NASA to consider wing designs that have low-boom characteristics, yet can be more efficient.

Even a 150-year-old photographic technique has helped unlock the modern mysteries of supersonic shockwave behavior during the past few years.

"We've reached this important milestone only because of the work NASA has led with its many partners from other government agencies, the aerospace industry, and forward-thinking academic institutions everywhere," said Peter Coen, NASA's Commercial Supersonic Technology project manager. 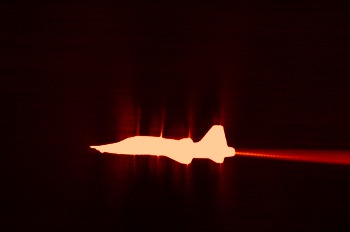 In this schlieren image, shockwaves are seen starting to form around this T-38. They propagate away from the aircraft and are heard on the ground as a sonic boom. NASA uses this imagery to study shockwaves and learn how to make sonic booms quieter. [Credits: NASA]

So now it's time to cut metal and begin construction.

The X-plane's configuration will be based on a preliminary design developed by Lockheed Martin under a contract awarded in 2016. The proposed aircraft will be 94 ft long with a wingspan of 29.5 ft and have a fully fueled takeoff weight of 32,300 lb.

A single pilot will be in the cockpit, which will be based on the design of the rear cockpit seat of the T-38 training jet famously used for years by NASA's astronauts to stay proficient in high-performance aircraft. 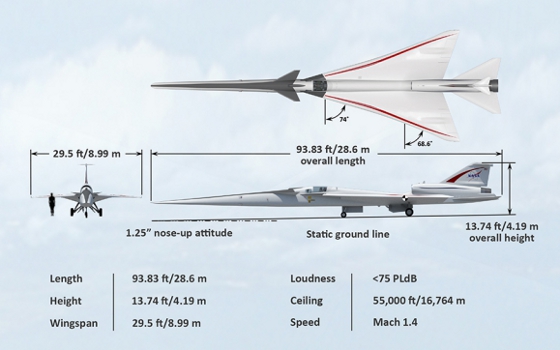 Jim Less is one of the two primary NASA pilots at the Armstrong Flight Research Center in California who will fly the X-plane after Lockheed Martin's pilots have completed initial test flights to make sure the design is safe to fly. 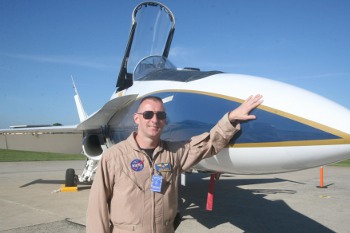 "A supersonic manned X-plane!" Less said, already eager to get his hands on the controls. "This is probably going to be a once-in-a-lifetime opportunity for me. We're all pretty excited."

Less is the deputy chief pilot for Low-Boom Flight Demonstration. He and his boss, Chief Pilot Nils Larson, have already provided some input into things like cockpit design and the development of the simulators they will use for flight training while the aircraft is under construction.

"It's pretty rare in a test pilot's career that he can be involved in everything from the design phase to the flight phase, and really the whole life of the program," Less said.

The program is divided into three phases, and the tentative schedule looks like this:

All of NASA's aeronautics research centers play a part in the Low-Boom Flight Demonstration mission, which includes construction of the demonstrator and the community overflight campaign.

For the low-boom flight demonstrator itself, these are their roles:

"There are so many people at NASA who have put in their very best efforts to get us to this point," said Shin. "Thanks to their work so far and the work to come, we will be able to use this X-plane to generate the scientifically collected community response data critical to changing the current rules to transforming aviation."