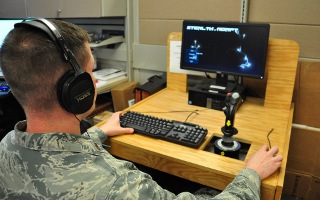 An Air Force officer operates a computer game designed to aid the U.S. Navy discover future operators for its remotely operated, unmanned vehicles (UxV). The project, titled StealthAdapt, is being developed by The Naval Aerospace Medical Institute and Adaptive Immersion Technologies, a software company, and is sponsored by the Office of Naval Research. [USAF photo by Staff Sgt. Alexx Pons]

To find out, the Naval Aerospace Medical Institute and Adaptive Immersion Technologies, a software company, are developing a computer game to identify individuals with the right skills to be UxV operators. The project, sponsored by the Office of Naval Research (ONR), is called StealthAdapt.

"The Navy currently doesn't have a test like this to predict who might excel as UxV operators," said Lt. Cmdr. Peter Walker, a program officer in ONR's Warfighter Performance Department. "This fast-paced, realistic computer simulation of UxV missions could be an effective recruitment tool."

Since the wars in Afghanistan and Iraq began, UxV have played ever-larger roles in intelligence, surveillance and reconnaissance, and other missions. Consequently, there's an increasing need for well-trained UxV operators.

In recent years, the Air Force established its own formal screening process for remotely piloted aircraft operators, and the Marine Corps designated an unmanned aviation systems (UAS) career path for its ranks.

The Navy, however, doesn't have an official selection and training pipeline specifically for its UxV operators, who face challenges unique to the service. For UAS duty, the Navy has taken aviators who already earned their wings; provided on-the-job, UAS-specific training; and placed them in temporary positions.

However, this presents challenges. It's costly and time-consuming to add more training hours, and it takes aviators away from their manned aircraft duties. Finally, the cognitive skills needed for successful manned aviation can vary from those needed for unmanned operators.

StealthAdapt is designed to address this issue. It consists of a cognitive test, personality assessment, and biographical history assessment. The cognitive exam actually is the game-based component of the system and takes the form of a search-and-rescue mission. Each player's assignment is to rescue as many stranded friendly forces as possible, within a pre-set time limit, while avoiding fire from hostile forces.

"We're trying to see how well players respond under pressure, which is critical for success as an unmanned operator," said Dr. Phillip Mangos, president and chief scientist at Adaptive Immersion Technologies. "We're looking for attention to detail, the ability to multitask and prioritize, and a talent for strategic planning-thinking 10 moves ahead of your adversary."

To maintain this pressure, players complete multiple 5- to 10-minute missions in an hour. Each scenario changes, with different weather, terrain, number of friendlies and hostiles, and potential communication breakdowns.

After finishing the game portion, participants answer questions focusing on personality and biographical history. Mangos' team then crunches this data with game-performance metrics to create a comprehensive operator evaluation.

Last year, over 400 civilian and military volunteers participated as StealthAdapt research subjects at various Navy and Air Force training centers. Mangos and his research team currently are reviewing the results and designing an updated system for validation by prospective Navy and Air Force unmanned operators. It will be ready for fleet implementation this year.

Mangos envisions StealthAdapt serving as a standalone testing and recruitment tool, or as part of a larger screening process such as the Selection for UAS Personnel, also known as SUPer. SUPer is an ONR-sponsored series of specialized tests that assesses cognitive abilities and personality traits of aspiring UxV operators.