There's always a tradeoff: Study shows that some wearable exoskeletons don't eliminate stress -- they just shift it to other parts of the body

You can wear an exoskeleton, but it won't turn you into a superhero.

That's the finding of a study in which researchers tested a commercially available exoskeleton -- a mechanical arm attached to a harness -- that's typically worn by workers to help them carry heavy objects hands-free. 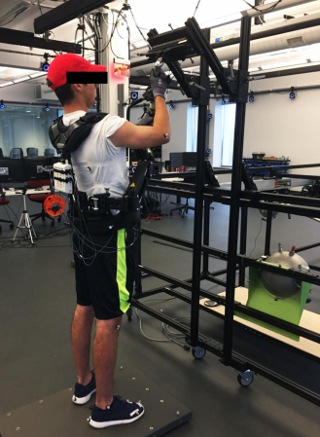 In the journal Applied Ergonomics, the researchers report that that the device relieved stress on the arms just as it was supposed to -- but it increased stress on the back by more than 50 percent.

There are tradeoffs with all exoskeletons on the market today, because they inherently change the way we move, said William Marras, director of The Ohio State University Spine Research Institute and Honda Chair Professor of Integrated Systems Engineering at Ohio State.

"The simplest way to describe it is like dancing with a really bad partner," he said. "Someone is tugging and pulling on you in directions you're not expecting, and your body has to compensate for that. And the way you compensate is by recruiting different muscles to perform the task."

For the study, 12 volunteers used two different pneumatic tools, a torque wrench and an impact wrench, as they might in industry. They used the wrenches with and without the aid of the exoskeleton.

The torque wrench weighed about 10 lb, while the impact wrench weighed 30 lb. When participants wore the exoskeleton, the wrenches were supported by the mechanical arm, which transferred the weight to a vest-like harness. The participants then only had to grip the wrench and move it up or forward as they might to tighten bolts in a factory.

Over the course of a few hours, researchers measured the forces on the volunteers' back muscles and spine. They found that wearing the exoskeleton increased compressive spinal loads up to nearly 53 percent compared to not wearing it. Stress on different muscles in the torso increased anywhere from 56 percent to 120 percent while wearing it.

"This exoskeleton is meant to offload weight from your arms, so for your arms it's great," said Gregory Knapik, senior researcher at the institute. "The problem is, the weight of the tool, the weight of the mechanical arm, and the weight of the vest you're wearing -- that all goes to your back. At the end of the day, you're just trading one problem for a potentially even worse problem."

The volunteers didn't seem to notice the extra strain on their backs, but they did notice that they were uncomfortable, chiefly because of the stiff metal rods that lined the harness and prevented them from moving normally.

"You see people wearing this same exoskeleton all the time -- workers in industry, camera people at sporting events -- so you'd think they'd be more comfortable. But, no," said Knapik. "People hated it for the short time that they wore it. Every single person said they would never wear this if they didn't have to."

Given that the study participants had to wear the harness for only part of a day, the researchers expect that the stresses would be higher for someone who had to wear it for an entire work shift, day after day.

The manufacturer of this particular exoskeleton is aware that it can cause back fatigue. Like makers of similar products, it recommends that users undergo muscle conditioning to prevent injury while wearing it.

Passive exoskeletons, like the one tested in this study, contain braces and springs to help support areas of the body. Active exoskeletons, like those worn by Iron Man or Ripley in the movie Aliens, are just now starting to become a reality. They contain motors that aid movement -- almost, Marras said, "like power steering for the body." He and Knapik will be testing the spinal loads caused by just such a powered exoskeleton this fall.

Co-authors on the study included Eric Weston, Mina Alizadeh, and Xueke Wang, all of Ohio State.