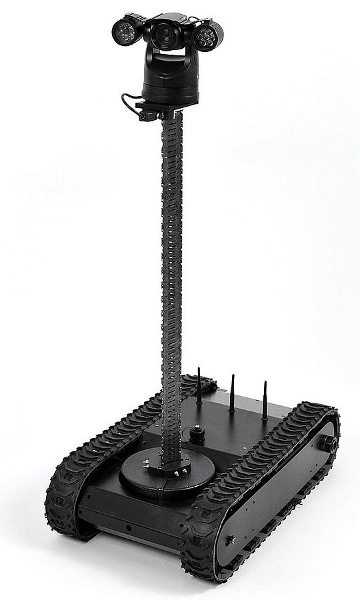 The Bavarian company progenoX supplies vehicles for unmanned exploration. The highlight of their unmanned ground vehicles (UGVs) is the extremely compact "Zippermast," which consists of three interlocked steel tapes that function similar to a zipper/tape measure-tech combo. A small DC motor from FAULHABER provides the unique design with reliable retraction and extension.

"Whoever sees the Zippermast for the first time is amazed by how high it can be extended," says Frank Woodcock, general manager of progenoX. That is because the housing where the mast is hidden is very small: the smallest model, the ZM4, is just under 6 in. (15 cm) high, and the standard model, the ZM8, is 9.84 in. (25 cm). How far the mast can be extended can be seen from the model number; it corresponds to the height in feet. In the case of ZM8, which is easy to carry with its weight of 15.4 lb (7 kg), the mast extends to around 8.2 ft (about 2.5m). The mast of the ZM40 reaches a height of more than 40 ft (over 12 m).

Inspiration from the lowly tape measure
The trigger for the development of the innovative telescope technology was a request from the American armed forces. They were searching for a particularly compact and robust system that can be used on unmanned vehicles. For the design of the Zippermast, its developer, George Woodruff, was inspired by a metal tape measure, which can be extended without kinking due to the tension caused by its curvature. Woodruff used three steel tapes and interlinked them when extending according to the zipper principle. In this way, the flexible tapes become a stable mast. 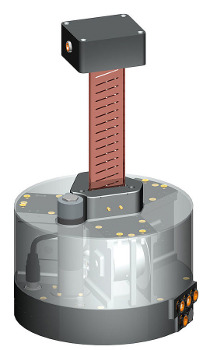 The three tapes made of spring-tempered stainless steel are wrapped around coils and arranged in relation to each other at angles of 120°. A guiding spindle, which is in the middle of this triangle, grips the tapes in the beveled slots provided. The tapes are rolled upward by the rotation of the guiding spindle. Their jagged outer edges interlock with each other. The Zippermast can be extended to any position in between. No additional locking mechanism is required to hold this position. The weight of the tapes and the load rest on the guiding spindle's thread, which can only be moved by rotation, like the nut on a screw.

"When I saw the Zippermast for the first time, I was immediately excited by the design principle," says Frank Woodcock, who acquired the technology in the United States back in 2012 and brought it to Germany. He reworked the telescopic mast with his team from progenoX and got it ready for series production. progenoX customers primarily consist of fire departments, emergency services, disaster control, civil defense, and police stations. They mostly deploy the masts for monitoring and surveillance purposes, which is the application design area originally intended. But the Zippermast has also proven itself to be useful at other tasks, such as inspecting pipes and shafts. For that reason, it is used in nuclear power plants in order to search ventilation systems for cracks and foreign objects.

Saving space while providing stability
Thanks to the coiled tapes, the Zippermast can occupy a small space in a very small housing. Another advantage of this design is that the diameter of the Zippermast remains constant in any position along the entire length of the mast, unlike telescopic masts that consist of components nested into each other. Because of this design, enough space in the interior of the mast remains to lead the cable through the guiding spindle to the head and be protected from outside influences.

Furthermore, its design principle makes the Zippermast extremely stable. This sturdiness is increased further by the heat treatment of the steel tapes. The coiled tapes are heated while on the coils and subsequently cooled again. The crystal structure of the steel adapts itself to this position and seeks to adopt it as the default. Tension is therefore generated by rolling up the tapes, which further stabilizes the mast. Thanks to its stability, the Zippermast can also extend horizontally and be loaded.

Suitable for challenging applications
ProgenoX has done a lot to make the Zippermast fit for everyday use. The steel tapes are coated with a special surface coating in order to minimize wear. The guiding spindle is hardened in a heating process, the electronics molded. Furthermore, the spindle motor used originally has been replaced. "When selecting the optimal drive, we received outstanding technical support from MICROMO and FAULHABER," says Woodcock. 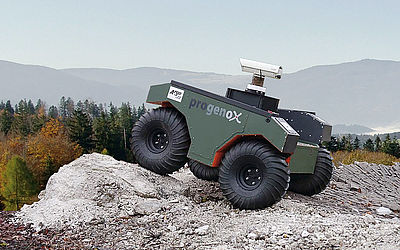 Because the Zippermast is often used in the most severe conditions, it must have a particularly robust and long-lasting motor. Furthermore, it was important to achieve very high performance at low volumes. "The motor which drives the guiding spindle, had to find space between two of the three coiled steel tapes and could only have, at most, a diameter of 32 millimeters," says Andreas Eiler, who supervised the project. Nevertheless, the micro DC motor had to deliver high output torque in order to extend the mast quickly, even when loaded. The final choice was to use a FAULHABER small DC motor. This provides a rated torque of 120 mNm with its powerful rare-earth magnets. The Zippermast also requires a very powerful drive. Here, the choice fell on a FAULHABER planetary gearhead, because, as Eiler says, "They are made solely from steel components."

Because of its construction, the motor can also work reliably under the most adverse conditions, and it has an extremely robust housing made from highly resistant plastic. The micro DC motor thereby fulfills the requirements for protection class IP68, keeping both dust and water away, as well as offering resistance to chemicals, UV, and infrared radiation. The micro DC motor also drives the saltwater-resistant variants of the Zippermast, which can be integrated, for example, in a buoy in the ocean or inlets.

Woodcock even believes that space applications for the tape measure-inspired tech are conceivable; he has already applied to participate on two projects. "The Zippermast can be used as a boom for small and medium-size satellite antennas or optical devices, for example. In addition, we are working together with the company ODGARGO who supply robot vehicles to the space agencies, NASA, and CSA," he says. "We have just installed the Zippermast on one of the ARGO robots, which may be used for a planned Mars mission. I figure we have a good chance to be involved in one of these space projects."