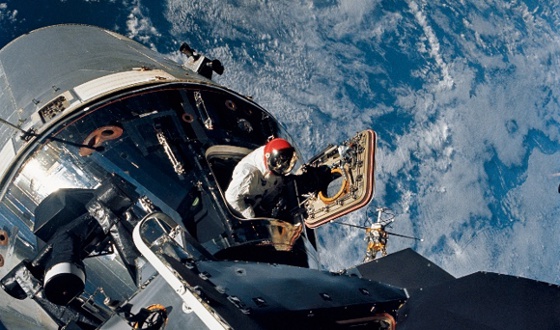 At precisely 11:00 AM EST on March 3, 1969, the five F-1 engines roared to life, and the 7.5 million lb of thrust they generated slowly lifted the 363-ft tall Saturn V rocket off Launch Pad 39A at Kennedy Space Center (KSC). For only the second time, the giant rocket was lofting three astronauts into space, taking the next step to meet President John F. Kennedy's goal of landing a man on the Moon and returning him safely to Earth before the end of the decade.

The three stages of the Saturn V placed the Apollo 9 spacecraft, still attached to the S-IVB third stage, into a precise orbit just over 11 minutes after liftoff. Weighing 95,231 lb, Apollo 9 was the heaviest crewed spacecraft placed into Earth orbit to date. To facilitate communications when the two spacecraft were flying independently, the crew designated their CM "Gumdrop" and the LM "Spider," clear references to the general appearance of the two vehicles.

Once the rocket had cleared the launch tower, oversight of the mission transferred from the LCC to Mission Control at the Manned Spacecraft Center, now the Johnson Space Center in Houston. There, three teams of controllers, led by Lead Flight Director Eugene F. Kranz and Flight Directors Gerald D. Griffin and M.P. "Pete" Frank, working in eight-hour shifts, monitored all aspects of the mission until splashdown. The capsule communicator (or Capcom), the astronaut in Mission Control who spoke directly with the crew during the launch, was Stuart A. Roosa. The other two Capcoms during the mission were Ronald E. Evans and Alfred M. Worden.

Less than two hours into the flight, during their second revolution around the Earth, the crew extended Gumdrop's docking probe at the apex of the cone-shaped spacecraft in preparation for the next phase of the mission: transposition and docking.

Two hours and 41 minutes after launch, the Command and Service Module separated from the S-IVB third stage and pulled a safe distance away. The four panels of the Spacecraft LM Adapter (SLA) that protected the LM during launch were jettisoned. McDivitt turned Gumdrop around to face Spider, still attached to the S-IVB, and slowly closed the gap between the two spacecraft, completing a successful docking.

About an hour later, springs ejected the docked spacecraft from the S-IVB. Ground controllers over the next few hours twice restarted the S-IVB's engine to simulate a Trans Lunar Injection, eventually sending the spent rocket stage into solar orbit.

Left: LM Spider still attached to the S-IVB stage, just prior to transposition and docking. Right: The S-IVB stage after separation from the docked spacecraft, with LM thrusters and antennas in the foreground.

Meanwhile, the crew busied itself with pressurizing the tunnel between Gumdrop and Spider, removed the CM hatch, connected umbilicals to power the LM while the two spacecraft remained docked, and replaced the hatch. The astronauts next performed the first of eight planned burns of the Service Propulsion System (SPS) engine, a five-second maneuver that raised the spacecraft's orbit to allow better lighting for the rendezvous later in the mission. The burn also validated that the docking mechanism between the two vehicles as well as the LM itself were sturdy enough to handle the firing of the large SPS engine.

After some housekeeping chores, the crew settled down for their first night's sleep in space -- for the first time in the Apollo Program, all crewmembers slept at the same time, unlike the previous missions during which at least one crewman was awake at all times to monitor spacecraft systems.

The next morning, after their breakfast, the crew busied itself with preparing for three SPS engine burns during the second day in space. The goal of these firings of varying durations was to demonstrate the controllability of the docked vehicles using the spacecraft's digital autopilot. The maneuvers also changed the spacecraft's orbit for better lighting conditions for the subsequent rendezvous and docking operations and reduced the overall weight of the Service Module to minimize fuel needed for later firings and the deorbit burn at the end of the mission.

The third day in space for the Apollo 9 crew of Commander James A. McDivitt, Command Module Pilot David R. Scott, and Lunar Module Pilot Russell L. Schweickart proved to be extremely busy. The major task ahead of them was the initial activation of the Lunar Module (LM) Spider. Schweickart was first to float through the tunnel from the Command Module (CM), followed about an hour later by McDivitt. The two closed the hatch behind them and began bringing the LM's systems to life, including extending the vehicle's four landing legs.

McDivitt informed Mission Control that Schweickart had experienced symptoms of space motion sickness, including vomiting twice, but that he now felt better. Mission Control, in consultation with flight surgeons and the crew, agreed that the mission could continue as planned, but out of an abundance of caution the spacewalk scheduled for the next day would be curtailed. Instead of translating to Gumdrop and back as originally planned, Schweickart would remain on Spider's front porch to evaluate the spacesuit and the Portable Life Support System (PLSS) backpack. Schweickart and McDivitt then began the first TV transmission of the mission, a seven-minute broadcast showing the duo in the confined space of the LM.

Left: View of Mission Control during one of the live TV broadcasts from Apollo 9. Right: Flight Directors (left to right) Griffin, Kranz, and Frank confer during the Apollo 9 mission.

The next major activity of the day was the first test of the Descent Propulsion System (DPS) engine, the rocket used to land the LM on the Moon. It was first tested during the uncrewed Apollo 5 mission in January 1968. This time there was a crew onboard and a Command and Service Module (CSM) docked to the front of the LM.

The main purpose was to evaluate if the LM's engine could serve as a backup in case of a problem with the Service Propulsion System (SPS) -- in retrospect a very useful test given it had to be employed in exactly that fashion during the Apollo 13 mission just over a year later. The burn was an out-of-plane firing, with no major effect on the spacecraft's altitude. Attitude control with the digital autopilot and manual throttling of the engine were also demonstrated.

After the 372-second burn was successfully completed, Capcom Stuart A. Roosa called up to the crew, "Spider, that was a beautiful burn, man, you were right down the tube," generating this response from McDivitt, "Looked pretty neat from here, too." The burn completed, the crew settled down for a meal before McDivitt and Schweickart deactivated Spider for the night and transferred back to Gumdrop. The crew's final activity of the day was the 43-second fifth burn of the SPS, which circularized the spacecraft's orbit for the rendezvous maneuvers planned for Flight Day 5. During the day, all three of the astronauts' wives, Pat McDivitt, Lurton Scott, and Claire Schweickart, spent some time in Mission Control's Visitors Gallery.

The Apollo 9 crewmembers began their fourth day in space by donning their spacesuits after their sleep period, and Schweicakrt and McDivitt once again transferred to Spider, closing the hatch behind them. Once in the LM, Schweickart, fully recovered from his earlier illness, donned the PLSS which provided him with oxygen during his spacewalk. Scott received his life support via umbilicals connected to the CM, and McDivitt similarly was using the LM's life support system.

McDivitt depressurized Spider, and minutes later Scott did the same with Gumdrop. Schweickart floated out through the LM's side hatch onto the front porch, exclaiming "Hey, this is like spectacular." He placed his feet into specialized gold-painted foot restraints dubbed the "golden slippers."

Scott then opened the CM side hatch and floated partway out of the spacecraft. The two spacewalkers could clearly see each other, and began filming and taking photographs of their activities. Mission Control was now essentially communicating with three different parties, with Schweickart picking up the callsign Red Rover, a nod to his red hair. Scott retrieved some thermal samples from the outside of Gumdrop. Schweickart did the same from the outside of Spider and tested out the handrails near the hatch and found them to be easy for maneuvering. 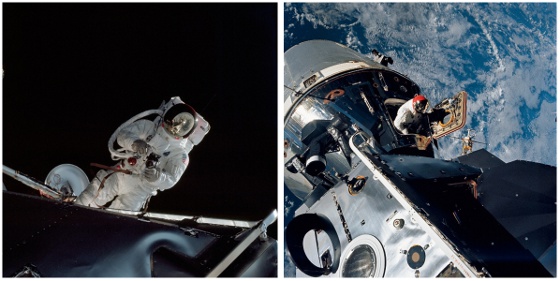 With those activities concluded, Scott and Schweickart reentered their respective vehicles and closed and locked the hatches. They had each spent about 37 minutes outside. Mission Control considered this first test of the spacesuits and PLSS (and the only one before the Moon landing) a complete success.

The last major activity of the day was the second TV transmission of the mission, also from the LM, taking place shortly after the end of the spacewalk with McDivitt and Schweickart still wearing their spacesuits. The quality of the broadcast was much better than the first, and the crew treated viewers to a scene of McDivitt eating, then pointed the camera out the LM's top window showing Gumdrop, then out one of the forward windows showing one of the LM's four attitude control thruster quads and one of the four landing legs, then back into the cabin to display a radiation detector and the LM's instrument panel. The broadcast lasted about 15 minutes. McDivitt and Schweickart then returned to Gumdrop to rejoin Scott for the night.

For their fifth day in space, the Apollo 9 crew had a full plate: undocking of Spider from Gumdrop, testing the LM's Descent and Ascent Stage engines by conducting separation maneuvers followed by a rendezvous, and docking with the CM. This marked the first time astronauts were flying in a spacecraft not designed to reenter the Earth's atmosphere -- redocking with Gumdrop was essential.

Spider backed away from Gumdrop to a distance of about 50 ft and began a slow turn so Scott in the CM could photograph all sides of the LM. Scott commented about Spider, "That's a nice-looking machine."

A small 10-second burn by the Service Module's Reaction Control System (RCS) thrusters increased the separation distance to about three miles. About 45 minutes after undocking, Spider's DPS engine fired for 19 seconds, first at 10 percent thrust then McDivitt throttling the engine up to 40 percent thrust, to begin the separation maneuver that placed it about 50 miles from Gumdrop before orbital mechanics began to bring the two spacecraft closer again. The next maneuver in the separation sequence was a 22-second DPS burn that opened the distance to about 100 miles.

To begin the rendezvous back to Gumdrop, Spider first fired the RCS thrusters on its Ascent Stage for 32 seconds, at the same time jettisoning the Descent Stage, which remained in orbit until March 22, burning up on reentry over the Indian Ocean. The next rendezvous maneuver was the first firing of the Ascent Propulsion System (APS) engine lasting three seconds, followed by a second APS burn lasting 38 seconds that put Spider on an intercept course with Gumdrop.

Two small course corrections refined the trajectory and Spider stopped about 100 ft from Gumdrop to begin a pitchover maneuver, allowing Scott to photograph the ascent stage including the engine, commenting, "You're the biggest, friendliest, funniest looking Spider I've ever seen." McDivitt then brought Spider in for a smooth docking with Gumdrop. The two craft had been flying separately for six hours and 23 minutes. Within two hours after docking, McDivitt and Schweickart rejoined Scott in the CM, and shortly after that they jettisoned Spider. Mission Control then commanded Spider's APS to fire for six minutes, placing it into a highly elliptical Earth orbit from which it didn't decay until Oct. 23, 1981.

The Apollo 9 astronauts had met their mission's primary objectives, and they still had five more days in space.