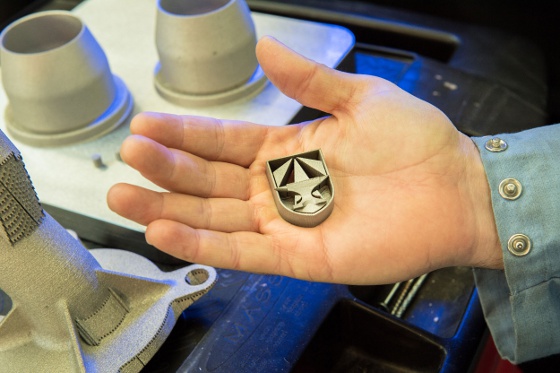 "I think it's going to really revolutionize logistics," said Dr. Brandon McWilliams, a team lead in the lab's manufacturing science and technology branch. "Additive manufacturing is going to have a huge impact on sustainment."

While progress remains steady, McWilliams said realizing the dream of quickly printed, reliable 3D metal parts is still a long way off; however its benefits will be substantial.

"You can really reduce your logistics footprint," he said. "Instead of worrying about carrying a whole truckload, or convoys loads of spares, as long as you have raw materials and a printer, you can potentially make anything you need." 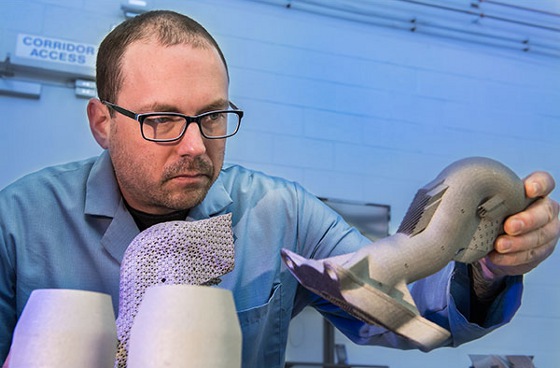 The researchers are using an alloy originally developed by the U.S. Air Force. The Army adapted the metal, called AF96, to powder form. Using a method called Powder Bed Fusion, the 3D printer's laser selectively melts the powder in a pattern. The printer then coats the build plate with another layer of powder, and the process is repeated until the part is complete.

"We're able to print up parts with internal structures that they would not necessarily be able to create with that much dimensional accuracy where they to try to use a mill or machine part," said Dr. Andelle Kudzal, a materials engineer on McWilliam's team.

Holding the resulting part in your hand is telling. It feels like a piece of steel that was forged traditionally, but it has intricate design features that no mold could create. Army researchers said this steel alloy has amazing qualities and more importantly potential applications for ground vehicle replacement parts.

"This material that we've just printed and developed processing perimeters for is probably about 50 percent stronger than anything commercially available," McWilliams said. 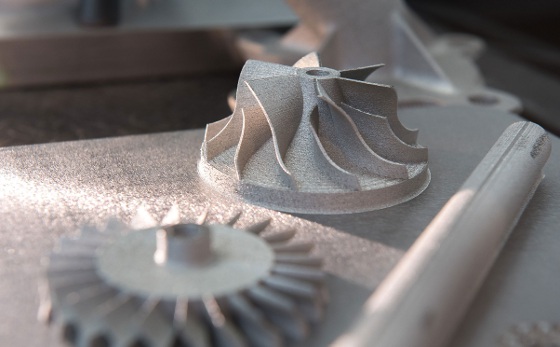 Titanium parts printed from powder and a laser provide researchers with high-strength, heat-resistant examples of the future of additive manufacturing. [U.S. Army photo by David McNally]

For Army applications, the key to usage is certification. Will the part work as needed in a battlefield scenario?

"We've printed some empeller fans for the M1 Abrams [Main Battle Tank] turbine engine, and we can deliver that part -- they can use it, and it works," McWilliams said. "But it's not a qualified part. In terms of a battlefield scenario, that may be good enough to be able to get your tank running again for hours or days if that's important to the mission, but on the other hand, we still need to be able to answer, does this perform as good as the OEM [original equipment manufacturer] part? Does this perform better?"

The researchers said it comes down to two real strategies. One is for battlefield sustainment, the logistics piece -- the replacement of existing parts and supporting legacy systems. But the second strategy is about futures systems.

"That's where we're more integrated with the OEMs and industry to see the things they're working on and see how we can make things better to really push the state-of-the-art," McWilliams said.

The Air Force initially developed this alloy for bunker-busting bomb applications. They needed a metal that was very high strength and high hardness, but they also needed it to be economical.

"The nice thing about that for the Army is that it has wide-ranging applications. We have interest from the ground combat vehicle community, so it could be used for replacement parts," McWilliams said. "A lot of our parts in ground vehicles now are steel. So this could be dropped in as a replacement not having to worry about material properties because you know it's going to be better."

The laboratory is working closely with industry and academic researchers to model new alloy designs, perform computational thermodynamics, and expedite the process to get the materials to Soldiers.