Made to order -- inspired design:
Most expensive new car is a Bugatti that is a one-off homage to past 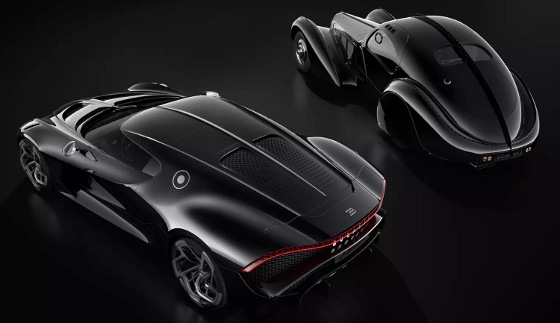 The new Bugatti "Voiture Noire" (left) is a homage to the one-and-only Type 57 SC Atlantic in black (illustration), the original Bugatti "black car."

If Batman drove a Bugatti, it would probably look like the new "La Voiture Noire," a one-off creation made for a single, discerning, and very rich collector who also has a fascination for a particularly exotic, rare, and expensive Bugatti of the past -- the 1936 Bugatti Type 57 SC Atlantic.

The Atlantic looks like something right out of Dick Tracy.

But comics are often caricatures, so these cars fit right in.

Bugatti made only one Type 57 SC Atlantic in black, and he made it for himself in 1963 and called it "La Voiture Noire" (the black car). He made and sold only three other Atlantics, and they each had a unique color and features. The original black vehicle has gone missing, adding to its collector allure. The new Bugatti "Voiture Noire" is a homage to the original and just as rare in its production -- only one was made.

The Atlantic was beautiful and exotic. Its wheels stood out far from the body, and its seductive, curvy fenders were highly exaggerated and on full display. But it was also lean, featuring an extremely long front hood. It was just over 12 ft long (3.7 m). 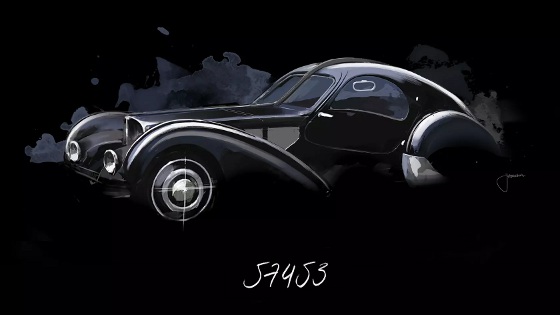 One of its most distinctive design features was a raised seam running vertically from the hinge in the split bonnet to the tail. This fin divided the body in the middle, with rivets holding the split metal sheets in place.

The Atlantic models were developed from the unique Aérolithe prototype, also known as Coupé Special or Coupé Aero. For this model, with chassis number 57 104, Jean Bugatti used Elektron sheet from aviation for the body. Elektron is an alloy of 90 percent magnesium and 10 percent aluminum. Although it is lightweight and strong, it is difficult to work and cannot be welded, which is why Bugatti riveted the body parts together, creating the noticeable, designer dorsal seam.

In a way it was unabashed, high-end designer French fashion too. Rebellious. It was proud to show its underwear.

For the four production Atlantics, Bugatti used aluminum but retained the rivets on the dorsal seam.

The old is new again
Running the full length of the car, this top-fin detail is evident in the updated Voiture Noire. 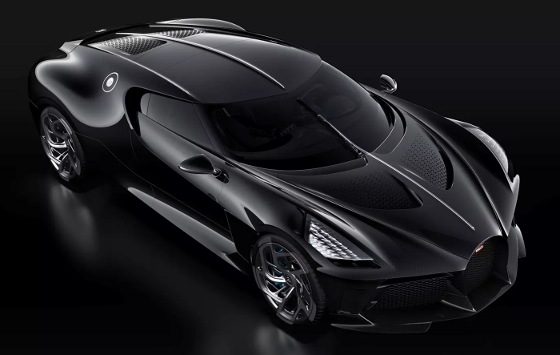 But the new "La Voiture Noire" is a far more than a modern interpretation of Jean Bugatti's Type 57 SC Atlantic. It is a feast of aesthetics," says Stephan Winkelmann, president of Bugatti. With its extended front end and the distinctive Bugatti C-line, the Voiture Noire is its own modern creation. 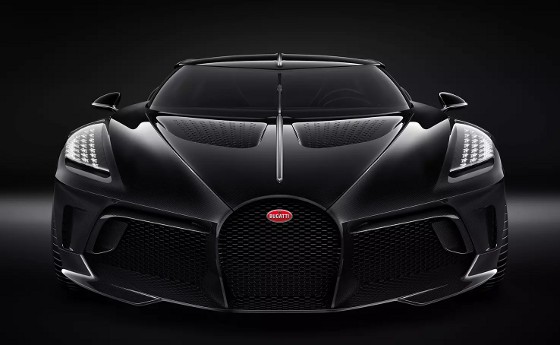 In this version, the bumpers are smoothly integrated into the body, and the windscreen seems to flow seamlessly into the windows at the sides "like the visor on a helmet." There are a lot of reflective surfaces, and the lines, when they appear, are clear. It's made to look like it's all one piece, and (oddly for a hyper sports car) that it is comfortable for travel on long trips -- a real "grand tourisme."

"Every single component has been handcrafted and the carbon fiber body has a deep black gloss, only interrupted by the ultra-fine fiber structure. This is a material that has been handled perfectly," says Bugatti designer Etienne Salomé. "We worked long and hard on this design until there was nothing that we could improve. For us, the coupé represents the perfect form with a perfect finish." 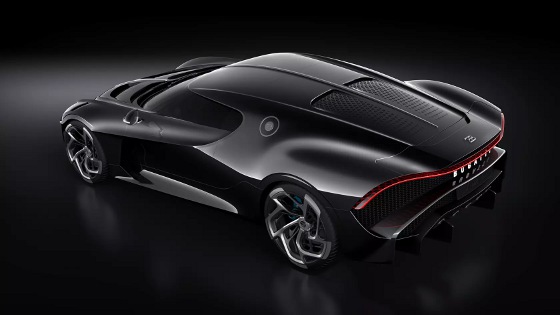 The heart of the new creation is its 16-cylinder engine, which is unique in the automotive world. "This is not only an engine but the heart of the vehicle and a technical masterpiece. There is no other car in the world with such an engine. It is not only extremely powerful but also beautiful to look at," says Winkelmann. 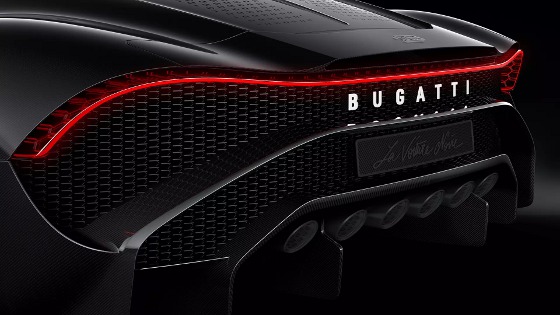 The 16-cylinder engine has a displacement of 8 liters and develops 1,103 kW/1,500 PS and 1,600 Newton-meters of torque. Six tailpipes at the rear bear witness to its incredible power. The original Atlantic also featured six thin tailpipes. 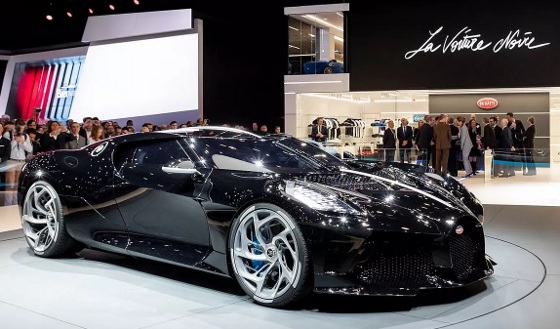 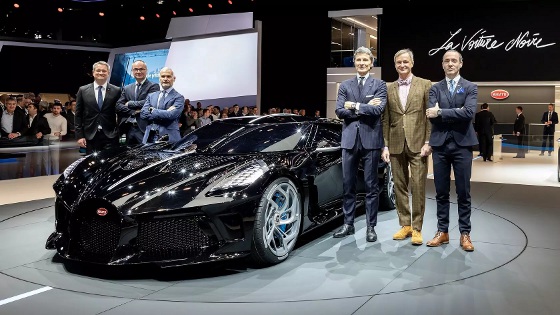 The new Voiture Noire made its debut at the 2019 Geneva Motor Show the first week in March. Some wondered how fast it could go and what it looked like inside. But most people were probably thinking, "So this is what $12.5 million dollars gets you?" (Bugatti lists it at 11,000 euros.) "Who ordered it?" The buyer, like a character in many comic books, remains a secret.

More on the inspiration
Ettore Bugatti's son, Jean, started to modernize the luxury brand's model construction policy around 1930. Instead of several different models, he developed one base model from which he derived several different variants. Bugatti designed the Type 57 as a production car and as a racing variant, "the ultimate grand tourisme." The range included various engine options and bodies such as Galibier (four-door saloon), Stelvio (convertible), Ventoux (two-door saloon), and Atalante (coupé). By the time production had come to a halt in 1940, about 800 Type 57 models in the various different versions had left the factory.

But the Atlantic was different, developed from the Aérolithe prototype, even though it was a 57 at heart. The model was named in honor of Bugatti's friend, Jean Mermoz, a pioneering aviator who was the first to cross the South Atlantic by air.

Bugatti sold only three of the hand-crafted Atlantic cars to customers. In 1936, Bugatti built the first model for British banker Victor Rothschild, originally without a supercharger, in grey-blue. This vehicle, with chassis number 57 374, is now known as the "Rothschild Atlantic." 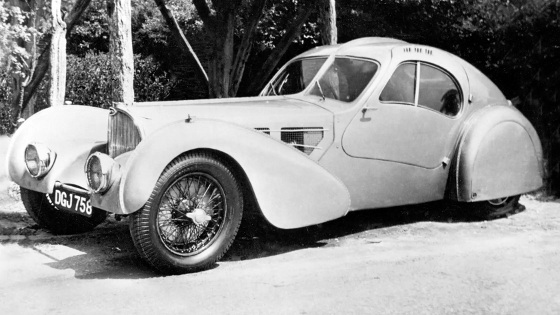 Jean Bugatti had the second Atlantic made for himself. Only he or a few selected friends, mainly Bugatti racing drivers, had the honor of sitting behind the large steering wheel of the coupé with chassis number 57 453. Bugatti used "La Voiture Noire" (the black car) with a front bumper and lower doors as a model for photos in brochures and a demonstration car for international motor shows, such as those in Lyon and Nice, France. (Very smart marketing!) 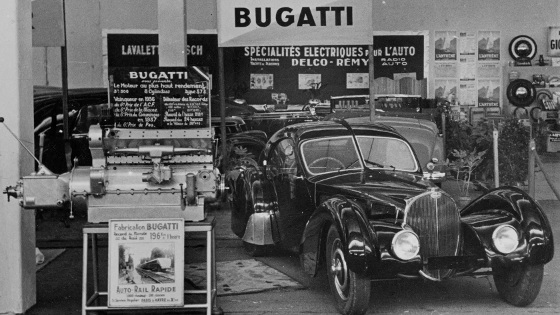 The "Holzschuh Atlantic," the third car built (chassis number 57 473), was delivered to Jacques Holzschuh of France in October 1936. The second owner of the car, a collector, died in an accident driving the car. The Bugatti was completely destroyed. Decades afterwards, it was the subject of a complex restoration, although the engine could not be saved.

The "Pope Atlantic" (deep blue) was completed in May 1938. It was the last Atlantic produced (chassis number 57 591). Its first owner was the Briton R.B. Pope. Fashion designer Ralph Lauren is now its owner.

In the long and lean Atlantic design, the doors continue into the roof to make it easier for passengers to enter and leave the low-slung coupé. The headlamps of the first two cars are integrated into the wings, while the other two cars feature separate headlight housings. The four cars have many other different details. Each model is unique.

"The Type 57 SC Atlantic is a design manifesto of Jean Bugatti. The breathtaking proportions of this masterpiece were simply unparalleled at the time and are still thrilling to the present day with their fascinating elegance," says Achim Anscheidt, director of design at Bugatti. In international beauty contests for historic automobiles such as the Pebble Beach Concours d'Elegance in California, these models have won a number of prizes over the past few years. "The riveted aluminum seam running over the roof is still a signature design feature to this day. It is unique and elegant."

The coupé was powered by a silent but strong 3.3-liter straight-eight with up to 200 PS. The top speed was in excess of 125 mph (200 km/h) at a time when horse-drawn carts still featured prominently on many roads.

Mysteriously, in contrast to the other models, there is no trace of Bugatti's own Atlantic car after 1938. It is not quite clear whether Jean Bugatti sold the car to a racing driver among his friends or whether it was moved to a safer region of France when the German army invaded Alsace (which some say is more probable). However, one thing is clear: The second Atlantic built has not been found to this day. It is now "la mystère de voiture noire." Its disappearance is one of the great mysteries in the history of the automobile.

Experts estimate the value of Bugatti's 1936 black Atlantic (chassis number 57 453) at more than $100 million if it is ever found.