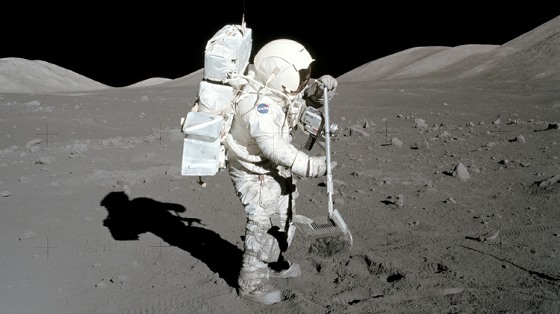 NASA has selected nine teams, including a team from The University of New Mexico's Institute of Meteoritics, to continue the science legacy of the Apollo missions by studying pieces of the Moon that have been carefully stored an untouched for nearly 50 years. A total of $8 million has been awarded to the teams.

"By studying these precious lunar samples for the first time, a new generation of scientists will help advance our understanding of our lunar neighbor and prepare for the next era of exploration of the Moon and beyond," said Thomas Zurbuchen, associate administrator for NASA's Science Mission Directorate in Washington, DC. "This exploration will bring with it new and unique samples into the best labs right here on Earth."

Six of the nine teams will look at one of the three remaining lunar samples, from Apollo missions 15, 16, and 17, which have never been exposed to Earth's atmosphere. The particular sample these teams will study came to Earth vacuum-sealed on the Moon by the Apollo 17 astronauts Harrison Schmitt and Gene Cernan in 1972.

As part of NASA's Apollo Next Generation Sample Analysis program, the UNM-led research team named the Consortium for the Advanced Analysis of Apollo Samples (CAAAS) and directed by Dr. Charles Shearer, a research scientist at UNM's Institute of Meteoritics and a research professor in the Department of Earth & Planetary Sciences, will systematically examine the double drive tube core collected by Schmitt and Cernan from a landslide deposit during their exploration of the Taurus-Littrow Valley in December 1972. This core along with the other samples collected during the Apollo Program represents the "crown jewels" of the United States and its space exploration program.

"We know how a landslide occurs on the Earth. But how do these landslide deposits occur on a body that essentially has no atmosphere, limited water, and lower gravity? This will be the first detailed examination of a lunar landslide deposit, including what triggered it, when did it occur, and how it formed," said research scientist Charles "Chip" Shearer.

The Apollo 17 sample comprises about 800 grams (1.8 lb) of material, still encased in a "drive tube" that was pounded into the lunar regolith to collect a core of material. That core preserves not just the rocks themselves but also the stratigraphy from below the surface so today's scientists can, in a laboratory, study the rock layers exactly as they existed on the Moon.

This core was stored in a core sample vacuum container (CSVC) that was sealed on the lunar surface and has never been examined. The team will examine the "water," gas, and volatile element record preserved in these specially preserved samples, the effectiveness of the sample container in keeping these samples uncorrupted, and potential container improvements. The core has been carefully stored at NASA's Johnson Space Center in Houston, TX, since December 1972. 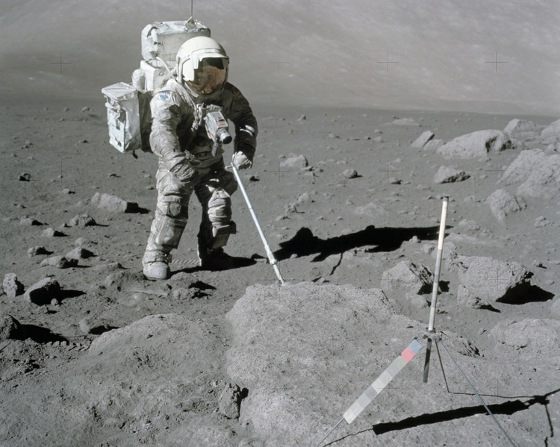 "This is the first examination of a core sample from a lunar cold trap' and will characterize lunar volatile reservoirs and reconstruct the lunar volatile cycle," said Shearer. "These measurements will prepare us to explore and sample potential resources for future human activities. Further, this will be the first analysis of a core through a lunar landslide deposit and will further our understanding of the timing, triggers, and dynamics of these events. The deposit may contain new lunar rocks never sampled before."

These studies will be accomplished through the integration of advanced analytical measurements unavailable during Project Apollo, new mission observations, and a multi-generational science-engineering team consisting of the first generation of lunar scientists who collected and examined the Apollo samples and the many generations of planetary scientists who followed in their footsteps.

The UNM-led research and engineering team will also combine measurements made on the Apollo 17 core with first-hand surface observations made by Schmitt and new orbital data produced by recent NASA and international space agency missions.

Fifty years ago, with great foresight, Apollo mission planners devised special sample containment systems that were designed to preserve fragile sample characteristics that could be contaminated and destroyed by interaction with the Earth's atmosphere. Many of these "special" samples remain to this day sealed in their original Apollo containers for eventual study by future generations of space scientists.

The technological capability for examining samples has increased since the last of the Apollo missions in 1972. The importance of volatiles for the future return of humans to the Moon and economic development of the Earth-Moon system has become increasingly recognized since the early part of this century. The record preserved in these special samples may provide important insights for future space exploration. 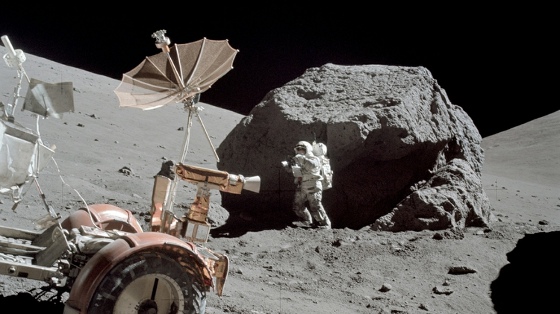 Harrison H. Schmitt is photographed working beside a huge boulder at Station 6 (base of North Massif) during the third Apollo 17 extravehicular activity (EVA) at the Taurus-Littrow landing site. [Credit: NASA]

"There are two unique features of these double drive tube core samples." said Shearer. "The samples were sealed on the surface of the Moon and may have preserved many characteristics of the lunar soil that could have been destroyed once returned to Earth. The other unique characteristic of this sample is that it's the only core sample that the astronauts collected that penetrated a landslide deposit."

"This is a multidisciplinary and multigenerational team conducting this study," said Shearer. "We have the first people who collected and studied the samples, teaming up with these generations of scientists that came after, including early career scientists and students."

Shearer has supported NASA in the past as chair of the Curation and Analysis Planning Team for Extraterrestrial Materials (CAPTEM), chair of the Lunar Exploration Analysis Group (LEAG), and member of the NASA Planetary Science Advisory Group. He has worked with NASA over the last 10 years to organize the release of a select number of these special samples.

Other teams will be studying samples that have also been specially curated, some from Apollo 17 that were brought to Earth and then kept frozen, and samples from the Apollo 15 mission which have been stored in helium since 1971.

NASA has only collected samples from a few places on the Moon so far, but NASA knows from the remote sensing data that the Moon is a complex geologic body. From orbit, the agency has identified types of rocks and minerals that are not present in the Apollo sample collection.

"Returned samples are an investment in the future. These samples were deliberately saved so we can take advantage of today's more advanced and sophisticated technology to answer questions we didn't know we needed to ask," said Lori Glaze, acting director of NASA's Planetary Science Division in Washington, DC.

The teams
The nine institutions set to study the samples include:

The samples won't be opened right away. First, the teams will work together and with the curation staff at NASA Johnson to determine the best way to open the sample to avoid contaminating them and maximize the science to be gained.

The teams for the Apollo Next-Generation Sample Analysis grants were selected by the Planetary Science Division and will be funded by the Lunar Discovery and Exploration Program.