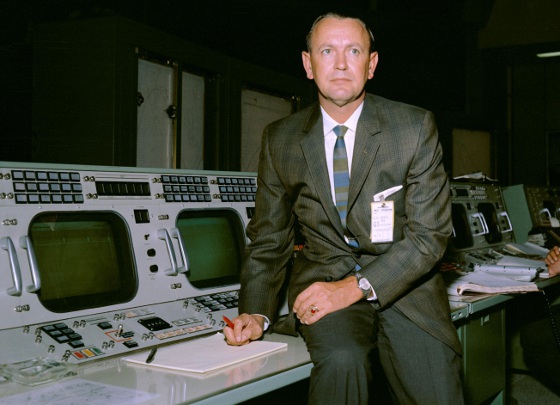 -----------------------
"Scientists say there is no life on the moon. I look at the moon today, see the faces from NASA, industry, science and academe who brilliantly sent Americans to that place, and I know differently. The people of Mercury, Gemini, and Apollo are blossoms on the moon. Their spirits will live there forever. I was part of the crowd, then part of leadership that opened space travel to human beings. We threw a narrow flash of light across our nation's history. I was there at the best of times."


-- Chris Kraft in "Flight: My Life in Mission Control"

Christopher C. Kraft, Jr., who died July 22, 2019, created the concept of NASA's Mission Control and developed its organization, operational procedures, and culture, then made it a critical element of the success of the nation's human spaceflight programs.

"America has truly lost a national treasure today with the passing of one of NASA's earliest pioneers -- flight director Chris Kraft," NASA Administrator Jim Bridenstine said in a statement. "We send our deepest condolences to the Kraft family.

"Chris was one of the core team members that helped our nation put humans in space and on the Moon, and his legacy is immeasurable. Chris' engineering talents were put to work for our nation at the National Advisory Committee for Aeronautics, before NASA even existed, but it was his legendary work to establish Mission Control as we know it for the earliest crewed space flights that perhaps most strongly advanced our journey of discovery. From that home base, America's achievements in space were heard across the globe, and our astronauts in space were anchored to home even as they accomplished unprecedented feats."

During the Apollo program, Kraft became the Director of Flight Operations at MSC, responsible for overall human spaceflight mission planning, training, and execution. His leadership in this critical area continued through the Apollo 12 mission in 1969, at which time he became deputy director of the Center. He served as the center director from January 1972 until his retirement in August 1982, playing a vital role in the success of the final Apollo missions, the Skylab crewed space station, the Apollo-Soyuz Test Project, and the first flights of the space shuttle.

"Chris was a visionary, an American hero, and a great leader," said Mark Geyer, director of the Johnson Space Center. "All of us at NASA Johnson are saddened by his passing."

Kraft was born Feb. 28, 1924, in Phoebus, VA, now a part of Hampton, VA. There, he attended high school and developed strong interests in non-aeronautical topics such as baseball, and drum and bugle corps. Unlike many of his aerospace peers later in his career, he wasn't interested in airplanes. After high school, he wanted to attend college, but didn't know where or what he should study. He chose Virginia Polytechnic Institute (VPI, now Virginia Tech) and enrolled in mechanical engineering in 1941. He credits his experiences in the military Corps of Cadets at the Institute for the foundation of his leadership training that would later characterize his personality in his NASA career.

By 1942, the VPI campus was being depleted of students because of the war effort, and Kraft patriotically decided to join the Navy as an aviation cadet. Unfortunately, his right hand had been severely burned when he was three years old, and he was declared unfit for military service. Ironically, his old hand injuries did not hamper his athletic prowess -- he played catcher on the VPI baseball team. A professor in the engineering department was an enthusiastic airplane devotee and passed his interest on to young Kraft. An elective course in basic aerodynamics inspired him to major in aeronautical engineering. In 1944, he graduated with one of the first degrees in that field awarded by the Institute.

Kraft was familiar with the work of the federal National Advisory Commitee on Aeronautics -- NASA's predecessor agency -- at Langley, which was located only about 7 miles from his home. However, he felt that Langley was too close to home, and accepted a job offer from Chance Vought in Connecticut -- with a back-up offer from the NACA also in hand. After experiencing first-day bureaucratic frustration at Vought, he opted to accept his back-up offer. So, in January 1945, he returned to Virginia to join the staff of the Langley Memorial Aeronautical Laboratory.

Kraft was assigned to the Flight Research Division under the leadership of Robert Gilruth and Hewitt Phillips, men he held in awe. He contributed to many critical programs that had been conceived by Gilruth, including evaluations of the flying qualities of aircraft, and free-fall model tests to measure transonic and supersonic aerodynamics. He served as project engineer on flying-qualities investigations of the P-51H, an advanced version of the famous Mustang. He also conducted analytical work on gust alleviation, and directed a pioneering study of potentially dangerous wake turbulence caused by trailing vortices. 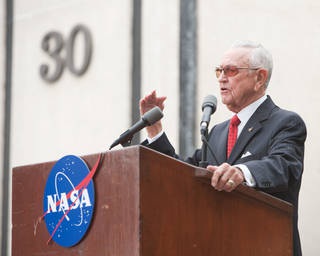 With the advent of the jet age of the 1950s, he was assigned as project engineer on flight tests of the Navy's high-priority Vought F8U Crusader, which was exhibiting numerous birthing problems in its earliest versions. The problems uncovered by Langley flight tests included unacceptable g-force control behavior during maneuvers, which was determined to result from unintentional pivoting of the unique movable wing used by the configuration. Working with Langley test pilot Jack Reeder, Kraft identified the structural source of the problem, and took on the unpleasant job of telling the Navy that its new first-line aircraft was potentially dangerous. His warnings were heeded by Navy management, resulting in grounding of the F8U fleet, much to the chagrin of many operators of the new aircraft.

He then encountered one of the most contentious members of the Navy's Bureau of Aeronautics, who questioned the Langley results and doubted the conclusions drawn by the NACA. That Marine Major was named John Glenn. Following a detailed examination of the Langley study results with Kraft and Reeder, and interviews with Navy pilots who flew the aircraft, Glenn was convinced and became a believer. The F8U was subsequently redesigned, as recommended by Kraft and his associates at Langley, and served the nation as an outstanding fighter during the Vietnam War.

Since his retirement from NASA, Kraft has consulted for numerous companies including IBM and Rockwell International, served as a Director-at-Large of the Houston Chamber of Commerce, and as a member of the Board of Visitors at Virginia Tech. In 2001, he published an autobiography entitled "Flight: My Life in Mission Control." His book is a detailed discussion of his life through the end of the Apollo program, and was a New York Times bestseller.

He has received numerous awards and honors for his work. These include the NASA Outstanding Leadership Medal; four NASA Distinguished Service Medals; the Distinguished Alumnus Citation from Virginia Tech, in 1965; the Distinguished Citizen Award, given by the City of Hampton, VA, in 1966; the John J. Montgomery Award, in 1963; the Goddard Memorial Trophy, awarded by the National Space Club, in 1979; and the John F. Kennedy Astronautics Award for 1996. In 1999, he was presented the Rotary National Award for Space Achievement for which he was cited as "a driving force in the U.S. human space-flight program from its beginnings to the Space Shuttle era, a man whose accomplishments have become legendary."

In 2006, NASA honored Christopher C. Kraft, Jr., for his key involvement in America's space programs with the Ambassador of Exploration Award, given to astronauts and other key individuals who participated in the Mercury, Gemini, and Apollo space programs, for realizing America's vision of space exploration from 1961 to 1972.

On April 4, 2011, NASA named its Building 30 Mission Control Center at the Johnson Space Center in his honor, in recognition of his service to the nation and its space programs. The Christopher C. Kraft, Jr., Mission Control Center has now operated for 50 years in support of space missions. At the naming ceremony, Flight Director Glynn Lunney commented, "The Control Center today ... is a reflection of Chris Kraft."

Chris Kraft married his high school sweetheart, Betty Anne Turnbull, in 1950. They have a son and a daughter, Gordon and Kristi-Anne.