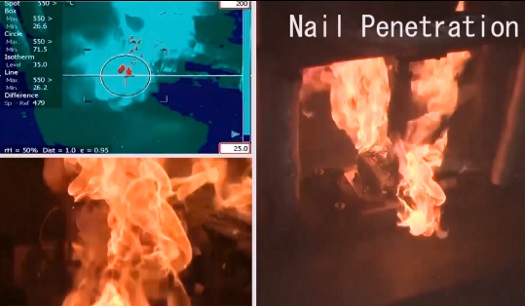 They crush 'em. They pierce 'em.

They overcharge and even over-discharge 'em. Heck, they can even shoot them with lasers.

Those poor batteries never really stand a chance against Sandia National Laboratories researchers whose job is to test the cells beyond their limits.

And now, with a new indoor tower that allows battery-abuse researchers to drop 200 lb or more on the out-matched lithium-ion cells, they've created yet another way to learn even more about how batteries respond to stress.

"This becomes our ninth way of killing a battery," said Sandia battery-abuse testing engineer Chris Grosso. "It hits with so much force that so far we are just chopping the batteries in half."

Lithium-ion batteries are most commonly found in electric cars, computers, medical equipment, and aircraft. And they are getting more powerful all the time. The constant push for more storage and power drives the need for tests such as those offered by the new drop tower, said Sandia mechanical engineer June Stanley.

"As far as we know, nobody in the U.S. has done any drop tests for impact testing like this," Stanley said. The data collected will aid industry in developing safer, more reliable batteries with more efficient performance. It will also help in responding to emergencies, such as electric-vehicle crashes, she said.

"An impact test like this is more real world, more realistic to what would happen," she said. "The test can give us a better understanding for first responders and how they handle an emergency. It can also be beneficial for industry researching and developing new technology."

Gravity takes over
The drop tower looms inside a hangar-type building that easily can be vented and cleared if there's smoke from a battery fire. Researchers control the tower remotely and watch the action on monitors inside a trailer parked about 90 ft away.

What they see is the drop tower reaching upward to just below the 14-ft ceiling. A battery sits in a steel tray bolted to a load cell to measure the impact force at the base of the tower, as a weight of at least 200 lb is perched above at heights up to 8 ft, 8 in. 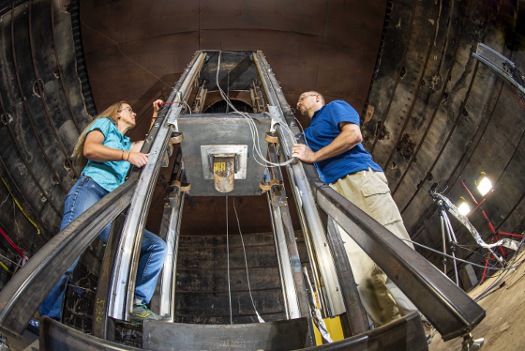 The push of a button unleashes the weight. Gravity takes over, followed by a violent collision of weight onto battery. Wires connected to the battery and the tower measure speed, force, temperature, and voltage. Cameras record the impact and resulting carnage. Data flashes to computers in the trailer.

So far, the team has tested single-cell lithium-ion batteries and a 12-pack of such batteries taped together. While the tests have not produced the sparks and heat that would occur in a slower-moving hydraulic crush test, they have collected useful data, Stanley said.

In the aftermath of the drop, the batteries are unstable and the safety status of about half the cells is unknown, she said. "It certainly helps with a better understanding for first responders to handle a situation like that."

Testing leads to improvement
The maximum weight that can be used to smash, crush, or chop a battery is 500 lb because of the components chosen, Grosso said. "That can easily be upgraded, if needed, and we can keep adding weight to get more force."

Welded tube steel and off-the-shelf rails and bearings make the drop tower cheap to maintain, even if less than elegant to look at, said Grosso, who designed the tower's electronics and operating software.

"When the inevitable fire comes, parts can be replaced cheaply," he said. "It doesn't have to be pretty, but it does have to be effective, and we have to be able to justify the cost to our customers."

Stanley joined with Grosso about two-and-a-half years ago and improved the mechanical design, safety, and engineering controls to move the tower from idea to reality. Stanley, who spearheaded the manufacture and installation of the drop tower, said the team plans to improve the contraption as more tests are performed and customers ask for different types of tests.

"This is just the base design," she said. "We have hopes and plans to improve on it."

Click the image above to watch some of the Sandia battery-testing methods in action, like nail penetration, crushing, and overcharge.

Future improvements will be to add springs or gas-pressurized pistons to boost the downward acceleration of the weight, increasing the impact force.

"To get more impact force we can increase the mass or the acceleration of the object impacting the battery, or both," Stanley said. "Right now, we are accelerating at the rate of gravity. Our goal is to have a much higher rate of acceleration, thus more force!"

Other plans will develop as industry continues to push the envelope on the power that batteries can produce and store. And as those batteries work their way into more everyday devices, Sandia researchers will continue to get better at abusing them.

It's that itch to push batteries past their limits that will ultimately push development. The more data available, the better developers can design the next generation of energy storage devices with improved performance, reliability, and safety.

"As an added capability to what we are already doing, the drop tower is very cool," Grosso said. "Our customers have been asking for something like this, and it just shows that we have got some serious brain power in our lab."