Can bearings slide better on water instead of oil? 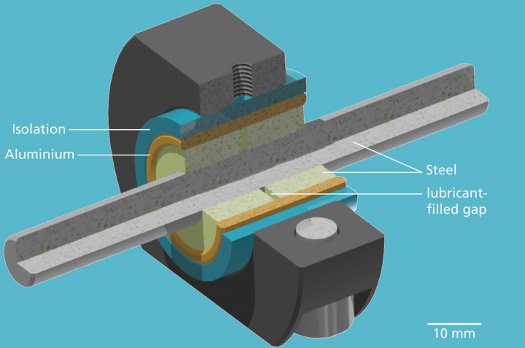 Researchers in Germany say a new slide bearing design with water lubrication and galvanic coupling prevents tribo-corrosion and may be better for the environment than using oil. [Image: © Fraunhofer IWM]

Bearings are usually lubricated with mineral oil-based lubricants, preventing wear on the bearing from metal-on-metal contact. In Germany, approximately 1 million tons of lubricant are used every year. The manufacture, application, and disposal of oil is a burden on the environment.

Introducing water-based lubricants could greatly benefit environmental protection. But until now, the fact that metal parts corrode when they come into contact with water has been a major obstacle. A working group at the Fraunhofer Institute for Mechanics of Materials (IWM) in Freiburg, Germany, has succeeded in using additives to change water in such a way that it could be used as a lubricant at some point in the future. This means a double success for Dr. Tobias Amann and his colleagues at the Fraunhofer IWM. First, the lubrication achieved is much better, since water is not as viscous as oil. Second, corrosion is prevented.

How could that be?

The researchers developed their process using a slide bearing, a bearing that resembles a ring that surrounds a rotating steel shaft. The ring is made of several layers structured from the outside to the inside as follows: a sleeve surrounding the bearing, a layer of aluminum, and a layer of sintered metal that surrounds the shaft itself.

The trick is that the inner sintered layer is traversed by a small channel that lets water flow between the rotating shaft and the outer aluminum layer. This direct connection is decisive in the electro-chemical process, based on the fact that an electric voltage arises between a base metal such as aluminum and a more precious metal such as iron, even without having to apply any kind of external electric field.

Turning water into lubricant
The researchers use this electric voltage arising between the aluminum in the slide bearing and the iron in the shaft to turn the water into a lubricant. "We mix what are called ionic liquids into the water," explains Amann. "The ionic liquids are fluid salts which contain anions and cations." These ions are rearranged in the electric field and then collect on the interior side of the sintered metal ring in such a way that their ends are pointing upward, toward the rotating shaft. This forms a kind of galvanically generated protective layer on which the shaft can glide. 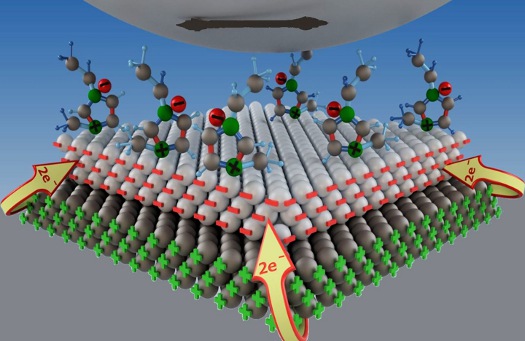 In the galvanically controlled frictional contact, the ionic liquids collect on the metal surface and improve the tribological friction and wear. [Image: © Fraunhofer IWM]

The research team has already demonstrated the viability of the process. Amann and his team are currently looking for partners in industry to further optimize the ionic liquids. "One challenge is that the movement of the shaft generates heat, which causes the water to evaporate," the scientist says. "Now we're looking for ionic liquid mixtures which inhibit the evaporation."

More efficient electric motors
The ion-water mixture is better for the environment than oil, and it also helps to make slide bearings even more efficient. "The shaft glides better when it is wetted with water," says Amann. "This reduces energy consumption compared to operations using considerably more viscous oil." In addition, corrosion is avoided. Normally, the oxygen in the water reacts with steels containing iron, ultimately resulting in rust. The electric field prevents this from happening.

In two projects together with their colleagues at the University of Freiburg, the experts at Fraunhofer IWM developed even more than the slide bearing with its electro-chemical internal workings.

They also designed a new measuring device, referred to as an in-situ tribometer, capable of monitoring metallic wear and friction values directly on the slide bearing during operation. Until now, it has only been possible to measure the wear on a bearing by disassembling the bearing before assessing and measuring the surfaces. This is highly time consuming. 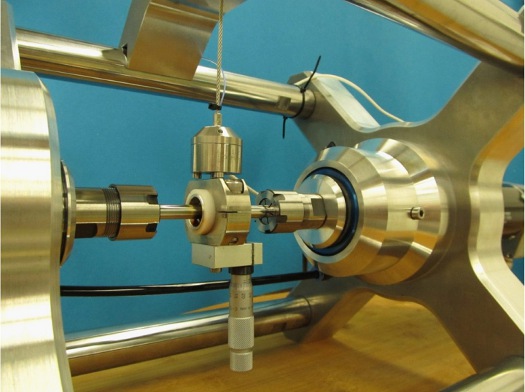 The new in-situ tribometer can measure wear and friction values directly on the slide bearing during operation. [Image: © Fraunhofer IWM]

"Our new tribometer now makes it possible to measure wear in situ, not only making it easier to develop feasible water-based lubricants, but also to continuously monitor bearings," Amann says.

What is referred to as a sacrificial anode, a less precious metal, is inserted into the aqueous environment. This anode slowly dissolves, emitting ions into the liquid in the process and creating a small flow of electrons toward the metal to be protected, functioning as a cathode. A negatively charged protective layer then develops on the metal's surface, preventing rust as well as tribo-corrosion. This is because positively charged cations from the ionic liquid or water lubricant collect on this negatively charged surface.