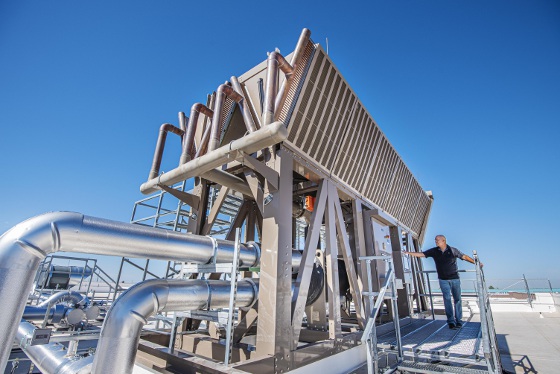 A thermosyphon cooler on the roof of Sandia's supercomputer center is inspected by engineering project lead David J. Martinez. [Photo by Randy Montoya]

The dramatic decrease in water use, important for a water-starved state, could be the model for cities and other large users employing a significant amount of water to cool thirsty supercomputer clusters springing up like mushrooms around the country, says Martinez.

The unit, called a thermosyphon cooler, also saved over 195,000 kilowatt hours of electricity during the same time period by making it unnecessary to pump thousands of gallons of water around the clock through energy-intensive mechanical chillers.

"We're testing out the system, because that's what national labs do. We're among the first to try things," says Martinez. "Others may come along when they see our success."

Reusable refrigerant substitutes for environmentally costly water
Every bit of electricity used to run the servers of increasingly large supercomputers turns into heat. Removing that thermal energy is expensive, either in the financial cost of powering mechanical cooling units or the amount of water needed to replace that portion deliberately evaporated to cool the remaining water. Neither choice is a plus for the environment. 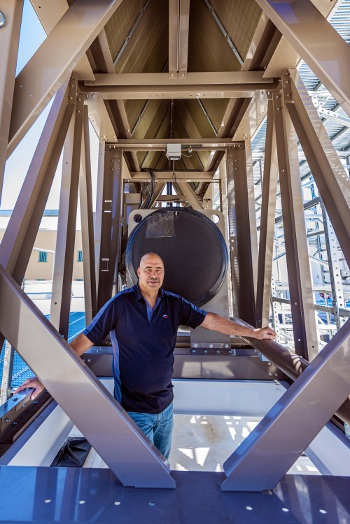 The thermosyphon cooling unit intercedes passively. Its refrigerant rests in a shell that surrounds an outgoing pipe like a glove on a hand, absorbing heat until the liquid evaporates into a gas, like boiling water becomes steam. The gas rises in vertical pipes until it reaches the upper limits of the device. There, it gives up its acquired heat to the atmosphere, coalesces back into liquid, and sinks down ready to cool again.

The cycle needs minimal maintenance. It works as long as the atmospheric temperature is less than that of the refrigerant; otherwise, the heat transfer goes the wrong way, from the atmosphere into the coolant.

In New Mexico, the system works for three seasons, but in summer, only at night. On hot summer days, the thermosyphon shuts down and water must be pumped to a mechanical chiller and then to a cooling tower, which evaporates water, like sweat from a body, into the atmosphere.

Because minerals don't evaporate, the remaining water, recycled, has a higher concentration of contaminants, which means it must be frequently changed out, like oil is periodically changed on a vehicle, before it fouls the cooling pipes. The evaporated and discarded water must be replaced. Those problems are almost eliminated with the new system.

Saving more than money
The solution is not cheap. Thermosyphons cost $200,000 each from their manufacturer, Johnson Controls. Sandia has installed one, bought two more, and may buy a fourth. For four units, annual cooling costs would drop, according to Martinez's estimates, from $181,000 to $116,000, which means a roughly 10-year pay-back in current dollars.

The real savings would come in water: "When the data center reaches full design load, each thermosyphon unit will be capable of saving over 4.2 million gallons of water per year," says Martinez, who won a DOE energy award last year for working on the same system, but far smaller, with the National Renewable Energy Lab in Golden, CO.