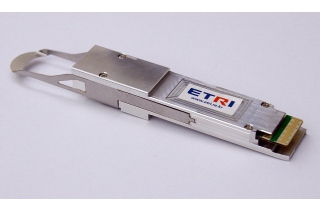 Researchers in South Korea have developed a new optical communications technology that can transfer data at lightning speed. The new technology sends and receives twice as much data as conventional methods. It is expected to contribute to solving data traffic congestion in 5G networks.

The Electronics and Telecommunications Research Institute (ETRI) in South Korea has succeeded in developing a compact 200-Gbps optical transceiver in the QSFP-DD (Quad Small Form-factor Pluggable Double Density) form factor. It would take about 4 seconds to transfer an ultra-high-definition 4K film using this technology, which is about 100 Gb.

Key benefits of the new technology include its minor sensitivity to changes in wavelength and temperature and its simple manufacturing process. The power consumption is 1.5 times lower and the density is four times higher, thereby reducing the communications equipment investment cost.

ETRI has also designed and developed a unique PAM-4 DSP algorithm. The new transceiver technology, combined with the PAM-4 DSP algorithm, set a world record in a recent real-time demonstration. The research outcome was published in Optics Express, a respected journal in the optical communications research sector.