Ferrari Roma: A taste of the sweet life 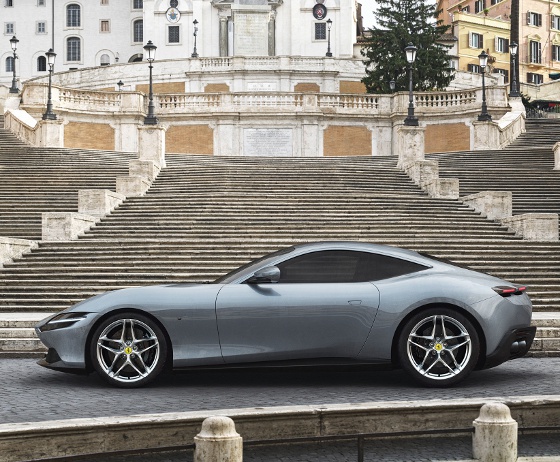 Ahh, the sweet life. Do you remember that, before things got so challenging? Ferrari still has that spirit and has channeled it into its new sleek and sultry Roma coupe. The 611-hp turbo V8 is simply stunning -- like someone in a 1960s spy movie got a glimpse of the future and related instantly. Refined and understated yet powerful and provocative, the Roma pays homage to a bygone era but also reminds us that "la dolce vida" is still here in modern times -- if we just take a moment to savor it. 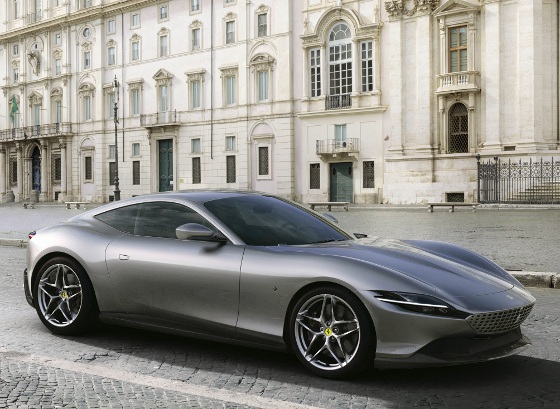 The mid-front-engined Roma's powerplant belongs to the Ferrari V8 turbo family voted International Engine of the Year for four years in a row. The main innovations on this version are new cam profiles, a speed sensor that measures the turbine revolutions and allows the maximum revs per minute to be increased by 5,000 rpm, and the introduction of the Gasoline Particulate Filter (GPF) to comply with the strictest Euro 6D anti-pollution standards. Ferrari engineers worked hard to optimize the GPF, a closed-matrix filter that traps particulate matter produced during thermal engine combustion, to guarantee it would not compromise driving pleasure. 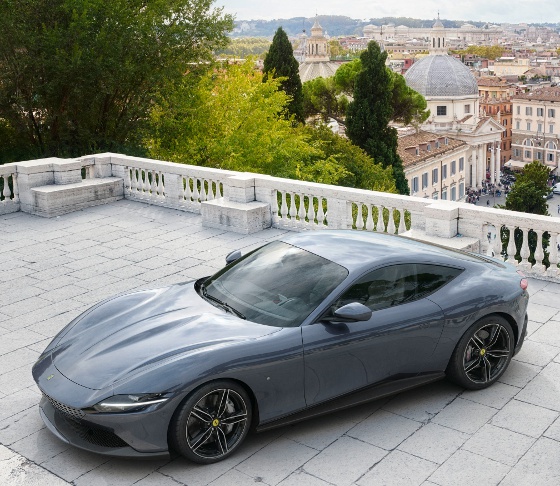 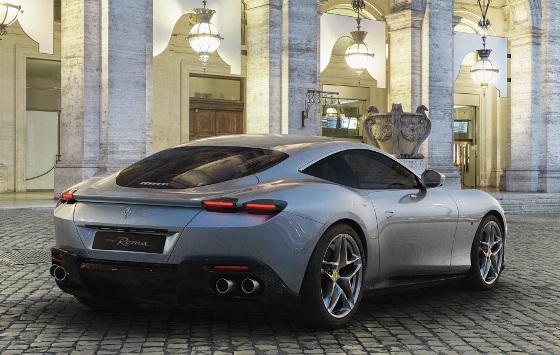 The coupe's new 8-speed dual-clutch gearbox is more compact and 6 kg lighter than its 7-speed Ferrari predecessor. As well as reducing fuel consumption and emissions, shifts in this automatic are faster and smoother thanks to the use of low-viscosity oil and a dry sump configuration to minimize fluid-dynamic efficiency losses, which makes the car even more responsive on the open road, but also especially comfortable in town and during stop-and-start driving situations.

The gearbox is based on a dual-clutch oil-bath architecture and is derived from the new 8-speed gearbox introduced on the SF90 Stradale (a plug-in hybrid). The main modifications made from that design are longer gear ratios and the introduction of a reverse gear (which is not used in the SF90 Stradale gearbox, because that car uses an electric motor for reversing). The new clutch module is 20 percent smaller but delivers 35 percent more torque than that of the previous 7-speed. The transmission software strategy has been evolved thanks to a more powerful ECU and better integration with the engine management software, making the shifts quicker, smoother, and more consistent.

The Ferrari Roma delivers almost instantaneous throttle response thanks to its flat-plane crankshaft, more compact in size with lower rotating masses to improve fluid dynamics; compact turbines that have a lower moment of inertia; the twin-scroll technology that increases the pressure of the exhaust pulses for maximum power; and the single-piece cast exhaust manifold with equal-length pipes to optimize pressure waves in the turbine and reduce losses. 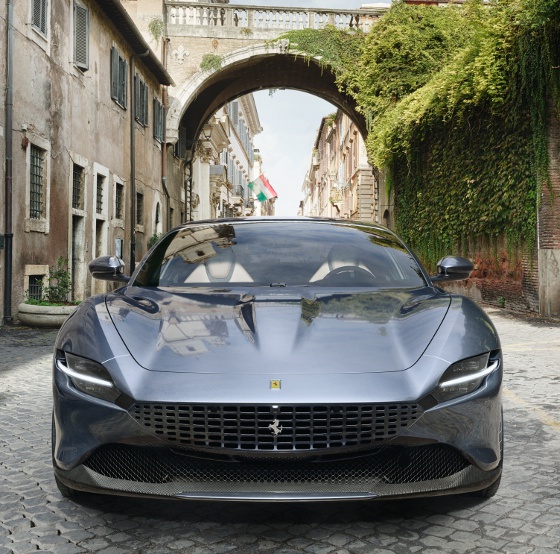 The Roma also features Variable Boost Management, a control software developed by Ferrari that adjusts torque delivery to suit the gear selected, delivering increasingly powerful pick-up as revs rise while optimizing fuel consumption. As the car goes up through the gears, the amount of torque delivered by the engine increases all the way up to 760 Nm in 7th and 8th gear. This has allowed Ferrari to use longer gear ratios in the higher gears, which helps keep fuel consumption and emissions down, while adopting a steeper torque curve through the rev range in the lower gears for a feeling of smooth, consistent pick-up.

The Ferrari Roma's dynamic development was focused on delivering superior driving pleasure and comfort thanks to the low vehicle weight and the introduction of the latest evolution of the Side Slip Control, which incorporates an algorithm that delivers a precise estimate of side slip to the on-board control systems. The chassis benefits from the technology developed by Ferrari for its new-generation models: bodyshell and chassis have been redesigned to incorporate the latest weight-reduction and advanced production technologies. Seventy percent of its components are entirely new.

Another cool added feature is the Matrix LED optional headlight system, which was designed to improve road visibility by using high beams without dazzling either drivers of cars in front or oncoming. When the system detects another vehicle in its light range, it selectively and automatically turns off the area of the beam that would dazzle the other driver, thereby creating a cone of shadow. If the system detects a high number of other vehicles, it may completely dim the lights and then only turn the high beams back on either partly or completely when the road is free. 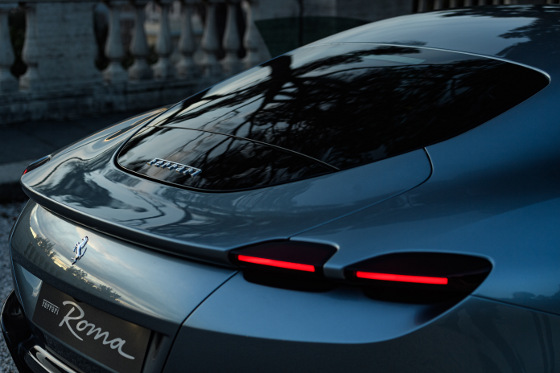 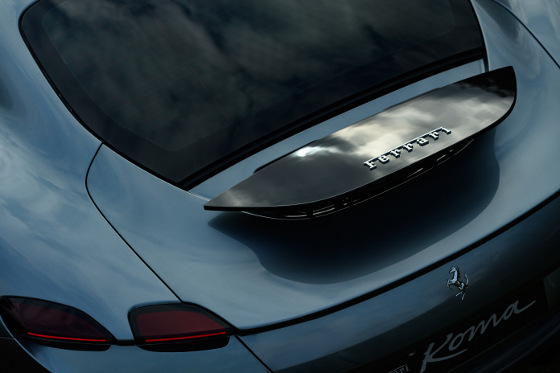 Aerodynamically, the Roma engineers developed several leading-edge technologies, most notably a mobile rear spoiler integrated into the rear screen designed to retain the car's formal elegance when retracted and guarantee the downforce essential for the car's impressive performance by automatically deploying at high speeds.The Ferrari Roma generates 95 kg more downforce at 250 km/h than the Ferrari's other related model, the Portofino, thanks to vortex generators on the front underbody and active aerodynamics at the rear. Using a special mechanism, the rear spoiler can deploy into three different positions: Low Drag, Medium Downforce, and High Downforce.

Inside, a cleverly balanced combination of elegance and sportiness brings a sense of exceptional refinement and unique character to the interior. The idea was to create two separate spaces or cells, one for driver and one for the passenger, in an evolution of the Dual Cockpit concept introduced on other cars in the range. 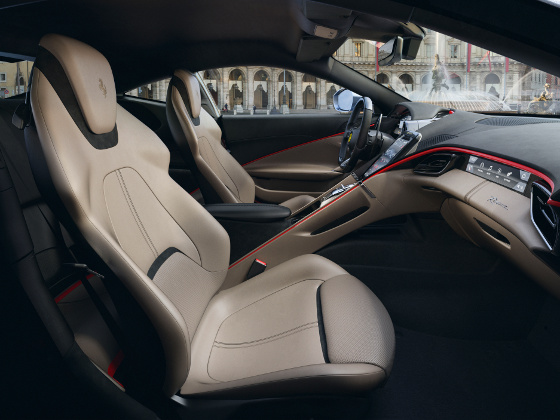 Unlike the Prancing Horse's sports cars, which are typically more driver oriented, the Ferrari Roma's cabin has an almost symmetrical structure that produces a more organic distribution of both spaces and functional elements. The aim was to make the passenger feel very involved in the driving experience -- almost like a co-pilot.

The Ferrari Roma's F1 controls have been set into the central console in a modern metal plate that references an equally iconic feature from the past: the classic gear-lever gate. This element is angled to make it easier for the driver to reach and see. Luxurious materials include full-grain Frau leather, Alcantara, chromed aluminum and carbon fiber. 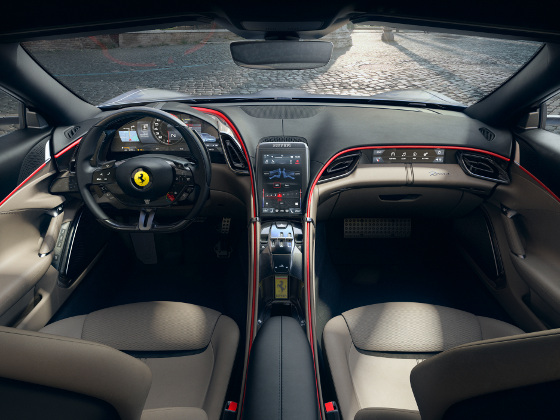 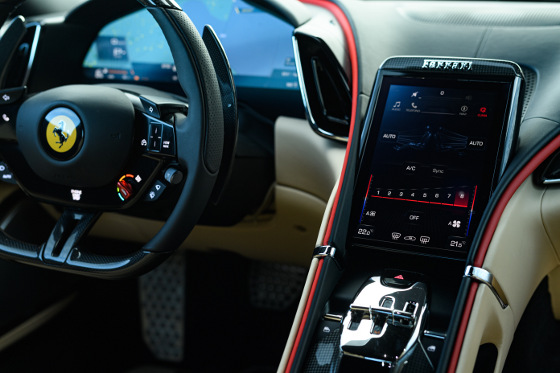 The main instrument cluster comprises a single 16-in. HD screen that is curved to make it easier to read. The new steering wheel introduces a series of multi-touch controls that allow the driver to control any aspect of the car without ever taking his or her hands off the wheel. New haptic controls include a very practical touchpad on the right-hand spoke of the steering wheel that allows the driver to navigate the central cluster screens, while voice and Adaptive Cruise Control are on the left.

An easy-to-use new 8.4-in. HD central display is set between the two cockpits and incorporates the other infotainment, sat-nav, and climate-control functions.

All in all, it's a sweet ride, isn't it? Even more so in candy red.

No official price was released by Ferrari, but the word on the street is a starting price of $225,000. Scheduled availability is this summer.